What's the largest galaxy in the Universe? (Synopsis)

"There is always a heavy demand for fresh mediocrity. In every generation the least cultivated taste has the largest appetite." -Paul Gauguin

From our vantage point within the Milky Way, it sure does appear impressive. Hundreds of billions of stars shine in our own cosmic backyard, with our galaxy spanning a whopping 100,000 light years from end-to-end. Yet not only is that small compared to our nearest large neighbor, Andromeda, but it’s not even 20% as large as the largest spiral galaxies we find. 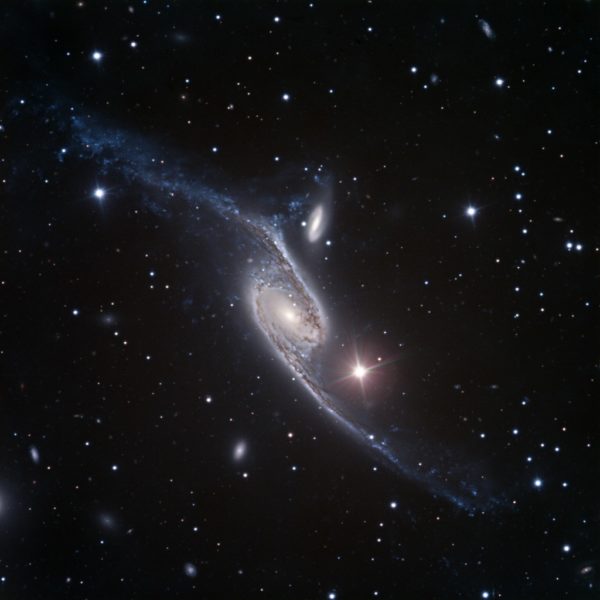 Severely disrupted galaxies, like NGC 6872, can extend for many times farther than a quiet galaxy that hasn't had a major gravitational interaction. Image credit: ESO / VLT, Judy Schmidt.

While tidal disruption might create the largest spiral galaxies, we have giant ellipticals that are many times larger than a spiral will ever achieve. Some of the biggest ones of all are found at the centers of massive galaxy clusters, but in the scheme of the entire observable Universe, only one galaxy can truly be the largest.

The giant galaxy cluster, Abell 2029, houses galaxy IC 1101 at its core. At 5.5 million light years across, over 100 trillion stars and the mass of nearly a quadrillion suns, it's the largest known galaxy of all. Image credit: Digitized Sky Survey 2 / NASA.

Which is it, and how do we know? Find out on this edition of Mostly Mute Monday!

Galaxy, Galaxy on the Wall...

"Magic mirror on the wall, who's the fairest one of all?" -the Wicked Queen For a galaxy, though, it's really not fair to ask which one's the fairest. It's simply too subjective of a question. But size, now that's something we can measure. So, I ask you -- galaxies of the Universe -- to step…

"The thing's hollow—it goes on forever—and—oh my God—it's full of stars!" -Dave Bowman, 2001: A Space Odyssey Back in October, we began a new, weekly series here called Messier Monday. Each Monday, we've taken a look at one of the 110 deep-sky objects that make up the Messier Catalogue, nebulous…

"They most likely form as subsystems within looser associations and evolve by gravitational processes. Strong galaxy interactions result and merging is expected to lead to the ultimate demise of the group. Compact groups are surprisingly numerous, and may play a significant role in galaxy evolution…

The Largest Trainwrecks in the Universe

"Where you used to be, there is a hole in the world, which I find myself constantly walking around in the daytime, and falling in at night. I miss you like hell." -Edna St. Vincent Millay It was just a little while ago that we were all speculating wildly -- and optimistically -- about Comet ISON,…

I make the volume of IC1011 on the order of 10^20 ly^3 (assuming triaxial ellipsoid with axes in the proportion 1:0.75:0.6, which seems about right for the more common shapes of elliptical galaxies). The Milky Way's volume is on the order of 10^13 ly^3. But there are only about 1000 times more stars in IC1011... what gives, are these giant ellipticals especially sparse? My numbers suggest a star density of only 1/10000th the milky way's--for every 10,000 stars in our night sky, extinguish all but one of them. Is this really what we'd expect to find in IC1011? (I know this is an oversimplification, because density is greater near the middle of a galaxy, but maybe the orders of magnitude aren't too far off?)

Hi Ethan. Quick question. The Standard Model doesn't seem to prohibit a Universe of age 1 Trillion years (72 of ours stacked together). At a quintillion maybe proton decay might have an effect ... but so what. Is the 13.8 GY age of the Universe simply stochastic?