"If you're puzzled by what dark energy is, you're in good company." -Saul Perlmutter

We normally assume that the fundamental constants of the Universe are actually constant, but they don’t have to be that way. They could vary in space, in time, or with the energy density of the Universe, in principle. Before believing in such an extraordinary claim, however, you’d need some remarkable evidence. It’s arguable that exactly that sort of evidence is emerging: from the tensions in the expansion rate of the Universe. 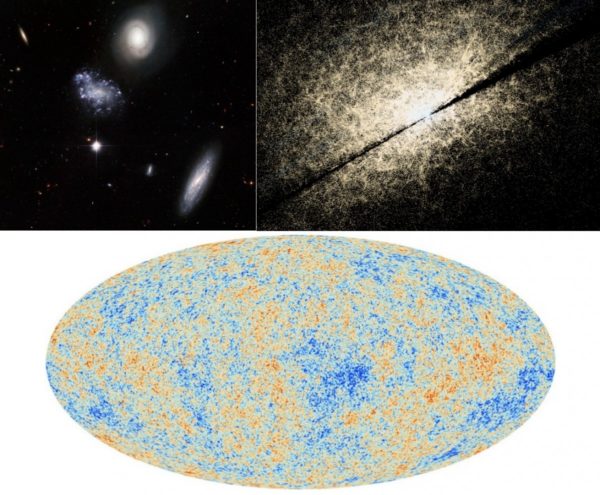 Three different types of measurements, distant stars and galaxies, the large scale structure of the Universe, and the fluctuations in the CMB, tell us the expansion history of the Universe. Image credits: NASA, ESA and the Hubble Heritage Team (STScI), SDSS, ESA and the Planck Collaboration.

If you measure the expansion rate from the cosmic microwave background, you get a value for the expansion rate of 67 km/s/Mpc. But if you measure it from the traditional cosmic distance ladder, you get a value closer to 74. This tension could be a systematic error in the measurement, but it could also point towards the value of dark energy changing with time. Interestingly, a large survey independent of the Universe’s expansion but dependent on weak lensing shows an increasing dark energy might be the answer. 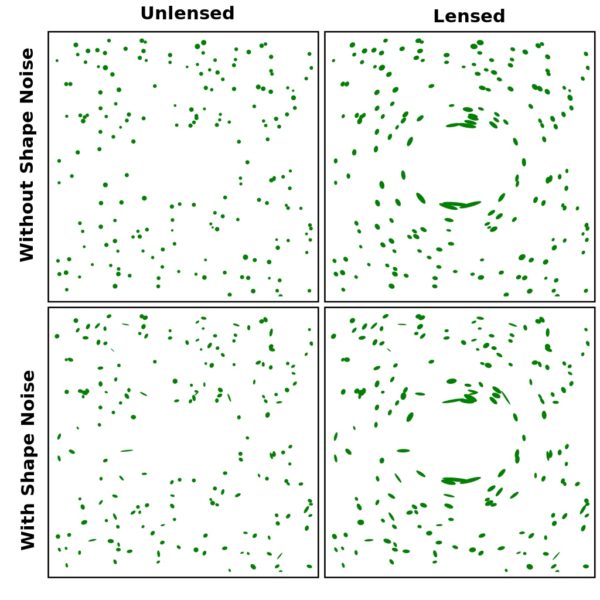 Any configuration of background points of light -- stars, galaxies or clusters -- will be distorted due to the effects of foreground mass via weak gravitational lensing. Even with random shape noise, the signature is unmistakeable. Image credit: Wikimedia Commons user TallJimbo.

It could all be systematic errors, of course, but if the effect is real, it could revolutionize how we understand the Universe. Sabine Hossenfelder explains.

I think Dark Energy keeps increasing or even staying constant goes against conservation of energy/information because unit volume of spacetime must have constant amount of zero-point energy. So my guess is it will turn out to be decreasing over time.

you can check Ethan's earlier post (ghm... 2011 ;) ) for a more detailed look into energy conservation

or alternatively you check Carrol's view on this

in a way.. it is what it is... but the first law of thermodynamics in it's broadest sense isn't violated IMO. But as far as space.. total dark energy density times time.. does go up.

@Sinisa,
I read both of those before. Not convinced.
I think the evidence of conservation of energy is overwhelming from all experiments and observations in history of science. It should not be abandoned so easily w/o absolute evidence.

@Frank #4: You really need to be fully versed in general relativity to be able to make a competent judgement about this.

All of the centuries of evidence for conservation of energy is _local_ (by definition), and nothing about GR contradicts that.

The whole, and only, issue is with your (or anyone's!) attempt to self-consistently define some sort of _global_ (i.e., Universe-wide) total energy, and then show that it is conserved.

Not convinced about what? Those two articles give deeper explanation on how energy/momentum conservation works and what is related to what. It's not meant to convince anyone about anything.

Or are you saying that you're not convinced that cosmologists really know physics and laws of thermodynamics?

Here's my question to you then. Forget DE. When light gets red-shifted or blue-shifted... where does the energy go.. or where does it come from?

@Sinisa
Are you saying all published physics papers are correct? Just a statement of facts? There is no way to argue against any of them? Or people from public should not comment on them?
Also of course I am not a scientist and I never claim I cannot be wrong. I am just telling my personal thoughts which is commenting here is all about.
Also I don't think photons losing energy causes the expansion of the universe.
Moreover idea that universe could expand to infinity by keep creating more energy out of nothing does not make sense to me. Neither the idea that total energy of the universe is zero (so it could expand forever w/o needing any new energy). But like I said these are just my personal thoughts and they maybe wrong of course.

Interesting how you skewed your reply so as to skip what I was saying and also not offer your answer.

No, I am not saying that all published physics papers are correct, nor have I mentioned any. What I am saying is that people with PhD's in physics know and understand thermodynamics better then both you and me. I'm saying like Michael Kelsey pointed out and Ethan and in Sean Carrol's post.. that what you consider "centuries of evidence" applies to classical systems, and that once the space that was considered "absolute" starts changing, so has to the notions of conservation. And in fact they are conserved.. not as energy only but energy and momentum combined.

I never said photons loosing energy causes expansion of universe. I asked you, in case of a photon being redshifted.. where does the energy go? Or are you comfortable with photons "violating" energy conservation just not comfortable with DE doing it?