Ask Ethan: How many Black Holes are there in the Universe? (Synopsis)

"Black holes are the seductive dragons of the universe, outwardly quiescent yet violent at the heart, uncanny, hostile, primeval, emitting a negative radiance that draws all toward them, gobbling up all who come too close…these strange galactic monsters, for whom creation is destruction, death life, chaos order." -Robert Coover

For the third time since it began taking data, the LIGO collaboration discovered direct evidence for merging black holes in the Universe. There's an incredible amount we've learned about black holes and where they're located, however, and very little of it comes from gravitational waves. 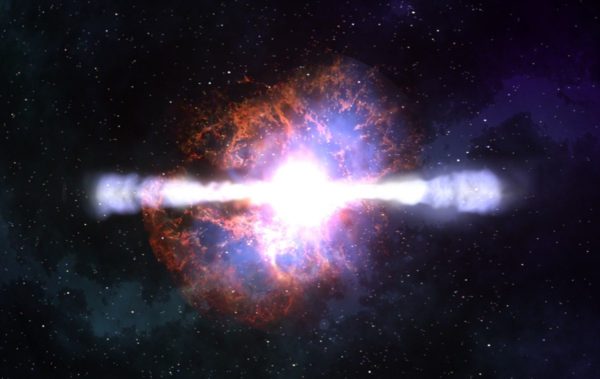 What we perceive as a gamma ray burst may have its origin in merging neutron stars, which expel matter into the Universe, creating the heaviest elements known, but also give rise to a black hole in the end. Image credit: NASA / JPL.

Instead, we know how black holes are made, where their progenitors are and were located, and how they're likely to be distributed today. If we put this picture all together, we can come up with a numerical estimate for how many are likely to be present in our galaxy, along with where they're expected to be concentrated. It's an incredible picture! 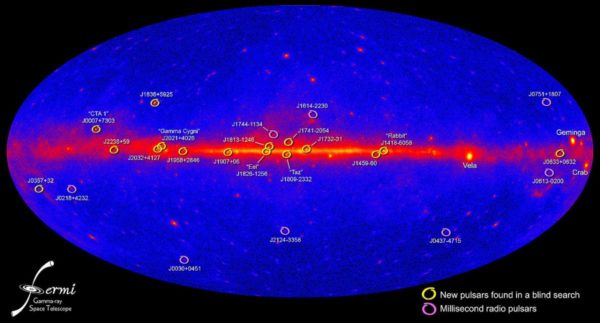 NASA's Fermi Satellite has constructed the highest resolution, high-energy map of the Universe ever created. The map of the galaxy's black holes will likely trace the emissions seen here with a little more scatter, and resolved into millions of individual point sources. Image credit: NASA / DoE / Fermi LAT Collaboration.

Just a few decades ago, we weren't sure black holes even existed; now we think we know where millions ought to be in every galaxy. Come get the remarkable story on this week's Ask Ethan!

Where do Supermassive Black Holes Come From?

"Black holes, which have no memory, are said to contain the earliest memories of the universe, and the most recent, too, while at the same time obliterating all memory by obliterating all its embodiments. Such paradoxes characterize these strange galactic monsters, for whom creation is destruction…

"It’s becoming clear that in a sense the cosmos provides the only laboratory where sufficiently extreme conditions are ever achieved to test new ideas on particle physics. The energies in the Big Bang were far higher than we can ever achieve on Earth. So by looking at evidence for the Big Bang, and…

Comments of the Week #114: From a 5th force to dark matter and life

“It isn’t the mountains ahead to climb that wear you out; it’s the pebble in your shoe.” -Muhammad Ali It may have been another fun week here at Starts With A Bang, where I've just learned something fun: I have an Erdös-Bacon number of nine! On the academic side, I published with Jim Fry, who…

"I happen to have discovered a direct relation between magnetism and light, also electricity and light, and the field it opens is so large and I think rich." -Michael Faraday With the launch of the Fermi satellite in the late 2000s, we began observing the highest energy photons in the Universe --…

"Black holes are the seductive dragons of the universe":
How about wolves among sheep?
No. I think Black Holes and Neutron stars are more like black and white pearls of the Universe.

What about MBH's at the LHC and UHECRs?

"Searches for MBH’s have been conducted by the CMS and ATLAS experimental collaborations at LHC in the framework of the more general “searches for exotica”. The analyses conducted so far have not lead to any evidence for MBH formation in p-p collisions at ECM = 7 TeV.

However, these analyses have been criticized, since QG effects, expected to be important at LHC energies, have been neglected or treated too naively in the event generators used.

Very recently, some theoretical work has also appeared in the literature pointing out, on the basis of other arguments like the generalized uncertainty principle or the extrapolation of the results of numerical simulation of colliding self-gravitating fluid objects, that the present LHC energy is in any case too low for the formation of MBH’s.

However, the situation is globally still controversial, and the exclusion at the present LHC energy certainly does not limit the possible formation of MBH’s at higher energies."