How Does Earth Move Through Space? Now We Know, On Every Scale (Synopsis)

“There is no such thing as perpetual tranquillity of mind while we live here; because life itself is but motion, and can never be without desire, nor without fear, no more than without sense.” -Thomas Hobbes

It’s hard to believe, but despite being at rest here on the surface of Earth, we’re actually hurtling through the Universe in a variety of impressive ways. The Earth spins on its axis, giving someone at the equator a speed of some 1700 km/hr. Yet at even faster speeds, the Earth orbits the Sun, the Sun moves through the Milky Way, and there’s a great cosmic motion that applied to the Milky Way galaxy beyond even that. 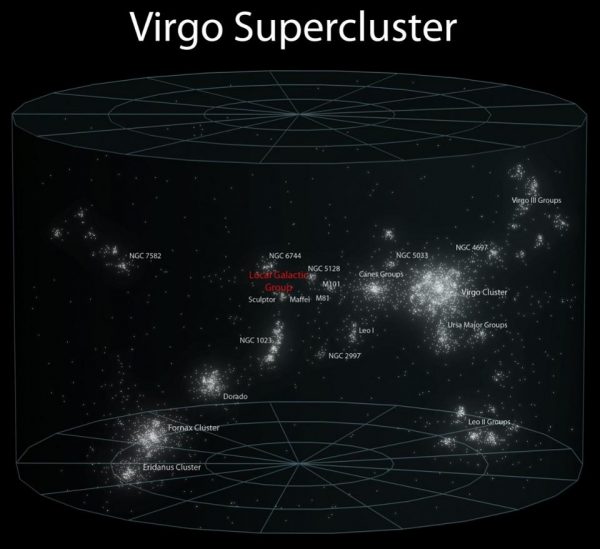 The various galaxies of the Virgo Supercluster, grouped and clustered together. On the largest scales, the Universe is uniform, but as you look to galaxy or cluster scales, overdense and underdense regions dominate. Image credit: Andrew Z. Colvin / Wikimedia Commons.

For a long time, we’ve been able to measure the total effect of all these motions, summed up, by measuring our motion relative to the cosmic microwave background: the leftover glow from the Big Bang. But it’s only very, very recently that we’ve identified the source of all the gravitational causes of this motion. While we’ve known of stars, galaxies, and the large-scale structure of where matter is, it’s new that we’ve quantified the effects of these great cosmic voids.

By combining everything together, we can finally explain the grand total of all of our cosmic motion through the Universe. Come get the full, complete story at last!

"There may not be a universal frame of reference"...

First, imagine an instrument that detects virtual pairs created from the quantum foam. It can tell energy and direction (momentum).

If I'm at rest compared to the CMB, let's assume the average momentum vector is 0.

If I'm moving at 0.9 C compared to the CMB, what do we expect to measure? Zero average momentum in that frame of reference? If so, how did particles know to match the speed of my instrument?

Why don't I measure a 0.9 C - influenced momentum when I'm at rest w.r.t. the CMB? All those virtual particles pop up if I'm moving, but not if I'm stopped?...

What a fascinating article :) we see so little of the realities around us ......

@Carl, virtual particles only manifest themselves when interacting with real particles: the measuring instrument. Why would they care about the speed of the instrument relative to other real particles, the particles from the CMB?

@Carl #1: You may want to look up "Unruh effect" and "Unruh temperature" for more details.

I don't know how I'm supposed to take this seriously when you completely ignore the stack of turtles all the way down.