Will Scientists Ever Discover Life Without A Home Planet? (Synopsis)

"An extrapolation of the genetic complexity of organisms to earlier times suggests that life began before the Earth was formed. Life may have started from systems with single heritable elements that are functionally equivalent to a nucleotide." -Alexei A. Sharov & Richard Gordon

We talk about the origin of life on Earth with bated breath, wondering all the time how things occurred to make our planet unique. But within that big question lies an assumption that may not be true: that life on Earth originated on Earth itself. It’s entirely possible, based on what we’ve seen out there in the Universe, that life didn’t originate here at all. Rather, it could have come from a primitive, pre-existing world, or even from the depths of interstellar space itself. 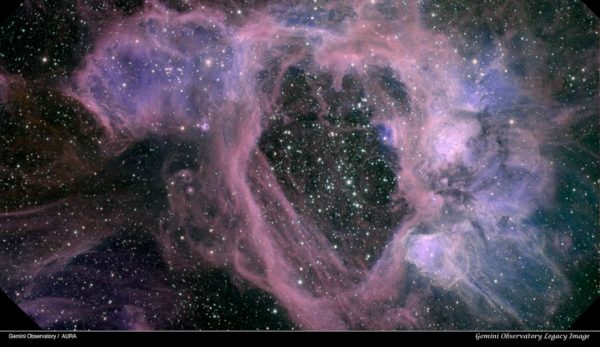 A rich nebula of gas, pushed out into the interstellar medium by the hot, new stars formed in the central region. Earth may have formed in a region like this, and this region may already be teeming with primitive forms of life, under some set of rules and definitions. Image credit: Gemini Observatory / AURA.

If it’s the latter case -- interstellar space -- then perhaps we don’t even require a planet at all to create the more primitive forms of life itself. Perhaps all you need is a molecule that encodes information, reproduces itself, and converts external energy for use in biological processes. And if that’s the case, the origin of life may bear very little resemblance to what life has evolved into today.

On this semilog plot, the complexity of organisms, as measured by the length of functional non-redundant DNA per genome counted by nucleotide base pairs (bp), increases linearly with time. Time is counted backwards in billions of years before the present (time 0). Image credit: Shirov & Gordon (2013), via https://arxiv.org/abs/1304.3381.

Could pretty much all places in the Universe, by the present time, have these ingredients that qualify as life? Let’s look at the evidence!

Why is it logarithmic and not some other function? Lots of things in nature grow (or decay) exponentially but why the number of base pairs?
(the caption says 'increases linearly with time' - not quite right?)

Genome size vs total number of cells in each species could be also an interesting graph (which does not seem to exist anywhere on the internet).

I got another question.
The meteorite has 80 other amino acids left and right in it that are not in life here - only 20 (well, maybe 22) and all left.
Are these 80 amino acids present in rocks on earth that are older than when life began on earth, and equal left and right?

Drs. Hoyle and Wickramasinghe were serious proponents of Panspermia.

Genome size vs total number of cells in each species could be also an interesting graph (which does not seem to exist anywhere on the internet).

It would probably be a lot more scattershot than most people expect. Consider for example the Onion test. Summary: human genomes are about 3.5pg. The allium genus (i.e. varieties of onions) contains species with genome sizes ranging from 7pg to 31.5pg. And that, as the author points out, is just one example of the mismatch between organism complexity and genome size.

Just a thought - What would have happen to the number of Genomes at the source that may have introduced it on Earth? Probably that source should be in Solar System and with time may have multiplied with the same log scale. Of course organisms at that source would have grown differently based on the environment they are living in..

PS: seems we are going back to God introduced life on earth theory :)

This is total nonsense. Genome size is related to the size of the organism and the requirement of genes for survival. Todays' prokaryotes for instance have evolved for as long as mammals, but they have smaller genomes. We don't know what was the size of the genome of the ancestral prokaryotes, which could be much smaller. Higher organisms evolve by horizontal gene transfer, mutation and selection, whereas the role of lateral transfer, directed mutation and hypermutation could be much higher in unicellular organisms. Therefore, there is no reason to postulate linearity, nor to put the dots as they are in the curve.