5 Facts We Can Learn If LIGO Detects Merging Neutron Stars

"It’s becoming clear that in a sense the cosmos provides the only laboratory where sufficiently extreme conditions are ever achieved to test new ideas on particle physics. The energies in the Big Bang were far higher than we can ever achieve on Earth. So by looking at evidence for the Big Bang, and by studying things like neutron stars, we are in effect learning something about fundamental physics." -Martin Rees

Two years ago, advanced LIGO turned on, and in that brief time, it’s already revealed a number of gravitational wave events. All of them, to no one’s surprise, have been merging black holes, since those are the easiest class of events for LIGO to detect. But beyond black holes, LIGO should also be sensitive to merging neutron stars. Even though the range over which LIGO can see them is much smaller, if there are enough neutron star-neutron star mergers happening, we might have a chance. 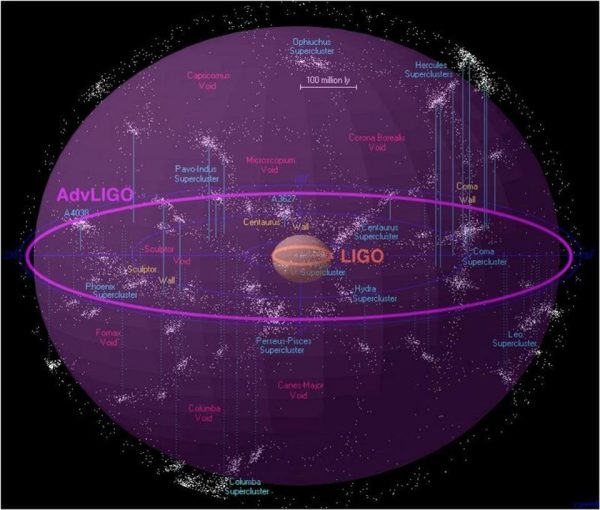 Illustrated here is the range of Advanced LIGO and its capability of detecting merging black holes. Merging neutron stars may have only one-tenth the range and 0.1% the volume, but if neutron stars are abundant enough, LIGO may have a chance at those, too. Image credit: LIGO Collaboration / Amber Stuver / Richard Powell / Atlas of the Universe. 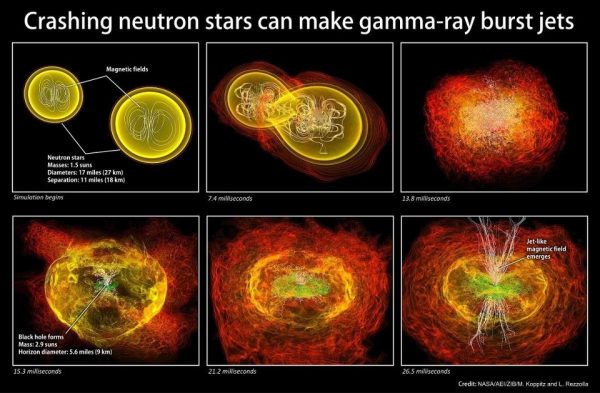 Beyond Black Holes: Could LIGO Have Detected Merging Neutron Stars For The First Time? (Synopsis)

"Presently thought to be the most powerful explosions in nature... their sources have only recently been localized by observations of associated afterglows in X-rays, visible light, and radio waves, delayed in that order." -Richard Matzner, on the dictionary entry for Gamma Ray Burst It seems like…

"It’s becoming clear that in a sense the cosmos provides the only laboratory where sufficiently extreme conditions are ever achieved to test new ideas on particle physics. The energies in the Big Bang were far higher than we can ever achieve on Earth. So by looking at evidence for the Big Bang, and…

"O. Hahn and F. Strassmann have discovered a new type of nuclear reaction, the splitting into two smaller nuclei of the nuclei of uranium and thorium under neutron bombardment. Thus they demonstrated the production of nuclei of barium, lanthanum, strontium, yttrium, and, more recently, of xenon and…

Why Neutron Stars, Not Black Holes, Show The Future Of Gravitational Wave Astronomy

"This is going to have a bigger impact on science and human understanding, in many ways, than the first discovery of gravitational waves. We're going to be puzzling over the observations we've made with gravitational waves and with light for years to come." -Duncan Brown Detecting black holes and…

There might be some astronomical observation of gravitational waves produced by neutron stars; although, I think, this time it is quite improbable, looking at the sheer fortuitousness of the so-called detection makes it untenable -- the VIRGO run was too short (just 25 days), LIGO never found any orbiting neutron stars' gravitational waves in the last 3 years, while there are too many neutron stars nearby to have slipped LIGO's notice. Let me add, 6 years earlier, minuscule gravitational waves of a wide frequency range (nearly zero to around 3 KHz) were first produced and detected in my lab late in 2010 and were reported in a US patent application which now is a US patent 8521029. You can find the patent detail on the USPTO site as well as on https://www.google.com/patents/US8521029 . You can check out gravitational waves and my work on Wikipedia. Let me also add, even if I am letting out a little secret, it is impossible to register any black hole mergers, because of the sheer volume of mergers -- I cannot talk more on this subject. So, let me tell you, LIGO actually never detected any black hole mergers in the past too. The least I can say is that the reported mergers were a result of the intense imagination of the LIGO folks, to say the least.

@Ethan: Your concluding paragraph seems slightly misleading to me :-) You imply that the current optical telescope scans of NGC 4993, in response to a LIGO trigger notice, are the "first" multimessenger astrophysical observations.

I think that honor belongs to SN 1987a, which had neutrinos detected by three different detectors, including Kamiokande (which wasn't yet Super :-), all of which preceded the optical observation.

IceCube (at the South Pole) has been running a notification system for several years, and is currently part of a global neutrino observatory consortium (SNEWS) to "pre-detect" nearby supernovae from their neutrino emission.