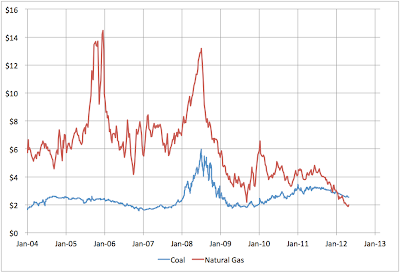 In case it isn't obvious its the price of coal (mostly stable) and gas (much more spiky, but currently below coal) per Mbtu.

* The Future of Natural Gas - Rutt Bridges at Climate, Etc.

There are actually a couple of relevant & interesting articles at Curry's place.

[I like what her chap has to say about CCS: "When you take an honest look at the economics of carbon capture and storage it is remarkable that anybody can discuss clean coal with a straight face." -W]

The methane price drop may be short lived:

Preferential pathways are a bitch.

[Is there a summary? I doubt that will be the end of fracking -W]

Of course it won't be the end of fracking, however, this case may very likely drive future regulation and increase the cost of obtaining natural gas... Much like Love Canal ignited Superfund. In fact, natural gas will likely contain an environmental tax of a few pennies per gallon to cover the cost of monitoring and remediation of these types of situation... much like gasoline tax is used for leak cleanups.

This looks to be a real big cock-up. A potential game-changer in terms of the free hand oil and gas companies have had in exploration and production. It can be done right, but it may push the price point back up above coal.

The following is gleeped from the conclusions section of the draft EPA report.

Detection of high concentrations of benzene, xylenes,
gasoline range organics, diesel range organics, and
total purgeable hydrocarbons in ground water
samples from shallow monitoring wells near pits
indicates that pits are a source of shallow ground
water contamination in the area of investigation. Pits
were used for disposal of drilling cuttings, flowback,
and produced water.

Detection of contaminants in ground water from deep
sources of contamination (production wells, hydraulic
fracturing) was considerably more complex than
detection of contaminants from pits necessitating a
multiple lines of reasoning approach common to
complex scientific investigations. In this approach,
individual data sets and observations are integrated to
formulate an explanation consistent with each data
set and observation. While each individual data set or
observation represents an important line of reasoning,
taken as a whole, consistent data sets and
observations provide compelling evidence to support
an explanation of data. Using this approach, the
explanation best fitting the data for the deep
monitoring wells is that constituents associated with
hydraulic fracturing have been released into the Wind
River drinking water aquifer at depths above the
current production zone.
Lines of reasoning to support this explanation consist
of the following.

Although some natural migration of gas would be
expected above a gas field such as Pavillion, data
suggest that enhanced migration of gas has occurred
to ground water at depths used for domestic water
supply and to domestic wells. Lines of reasoning to
support this explanation consist of following.

1. Hydrocarbon and isotopic composition of gas
2. Elevation of dissolved methane
concentrations in proximity to production
wells
3. Spatial anomaly near PGDW05
(Methane concentrations in ground water
appear highest in the area encompassing
MW01, PGDW30, and PGDW05. Ground
water is saturated with methane at MW01
which is screened at a depth (239 m bgs)
typical of deeper domestic wells in the area.
Methane was detected in PGDW30 at 808
Î¼g/L at a depth of only 80 m, the highest level
in any domestic well. A blowout occurred
during drilling at a depth of only 159 m bgs in
December 2005 adjacent to PGDW05.)

Yes, coal consumption has declined in the USA. This is partly due to declined miner productivity, hence increased costs of coal. It is also partly due to increasingly regulations of particulates (aerosols), making the oldest coal burners uneconomic to upgrade.

So the utility companies have to switch to other forms of generation rather rapidly and switching to natgas burners is speediest, irrespective of the price of natgas. Also, natgas burners are highly effective balancing agents for wind turbines, which are mandated by many states.

My attempted comment yesterday seems to have gone to the great bit bucket in the sky. So more briefly, the switch from coal to natgas in the USA is not primarily driven by prices.

[Sorry about that, not sure how I missed it. Now published.

Reply: coal has a lot of problems in comparison to gas (particulaties, sulphates, etc) but was always competitive on raw price. Whereas gas has many attractions. I think we agree that far. If gas sustains a low price, then ocal use will decline further -W]

A sign of potential intermittency problems with fracking in a warming world?

Note that neither over-generalization is very useful:

A depends on both:
a) Geology+hydrology which varies, and is often nontrivial to calibrate
b) Careful implementation of wells, which also varies

IF A happens to be true, AND IF it helps shut down coal, THEN it's probably something useful (for lower CO2/unit energy, if everything done right, and less mercury pollution, and better match with intermittents). I.e., there's a mix of nearby and global benefits.

IF B happens to be true in a given area, either because the geology+hydrology is wrong, or because operators drill bad wells, the effects are local and can be bad.

TO some extent, that looks like an insurance problem, especially since bad effects of errors may surface a while after operators have left.

In the Pittsburgh, PA area, long after coal mines had closed, people's houses collapsed, or there were methane fires, etc ... and of course, the companies were gone.

One would think that rather all-or-none reasoning, we could evolve an insurance business able to compensate people fairly and quickly for bad local side-effects. Insurance companies are paid to price risk.

[You'd hope so. We have by now a fair amount of experience of this kind of problem, and how to solve it, and how not to solve it -W]

Fracked wells do not produce for long. More regulations about fracking are forthcoming. In addition, there are 9 LNG export terminals in various stages of planning and permitting. On top of which, truck fleet operators are swsitching to CNG for light and medium weight trucks. Natgas prices will remain in flux.

For various reasons, utilities do not want to be more exposed to those fluctutions than they can help. For example, utilities in Florida are about 60% dependent upon natgas and that is enough to seriously propose building some extraordinarily expense NPPs. The unusual expense is entirely due to the extensive site preparation required, not the NPP itself.

In the U.S., the plunge in coal generation and rise in other sectors pre-dates the recent drop in natural gas prices by several years. Natural gas and wind have taken over coal's share by similar amounts. Here's some data on electricity generation:

Bridges speculates that wind and all other renewables will grow much slowly over the next decade but I've been hearing that for a few years now. The cause this time would be due to the expected expiration of federal tax credits. While this is an important factor, this assumes that advancement of renewable cost effectiveness will suddenly halt, and that natural gas will remain low-priced (a shaky assumption given its history and that it's a scarce resource) with its generation free of environmental scrutiny.

I think the concern in policy circles right now is that cheap gas could be the death of the US nuclear industry.

The call to reduce the use of coals is valid for western countries but unfortunately, coal statistics show developing economies are more likely to increase their use of coal in coming years because of its affordability and to meet increasing demands for electricity and steel for the coal industry. www.coalportal.com