dr. dolittle | May 13, 2014
Scientists in the jungles of southern India have discovered 14 new species of "dancing frogs" many of which are unfortunately already endangered. DNA analyses have shown that these new species are members of an ancient genus that has been around since the time of the dinosaurs, Micrixalus. There are now 24 known species of dancing frogs. Considering that males outnumber females 100 to 1, these acrobatics are important to attract mates. The tiny frogs are only about the size of a walnut. 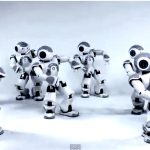 esiegel | May 27, 2012
"Listen, and understand. That terminator is out there. It can't be bargained with. It can't be reasoned with. It doesn't feel pity, or remorse, or fear. And it absolutely will not stop, ever, until you are dead." -Kyle Reese, the Terminator Sure, they may look innocent now.  Maybe you think they'll even live peacefully with us and create nothing but beauty, as Florence + the Machine might have you believe with their song, Cosmic Love. But the apocalypse will soon be upon us.  And I think that this cute fella may be just the thing that ushers it in. NAO robot, courtesy of Aldebaran Robotics,…

cagapakis | May 4, 2010
So I had this great post planned about the Boston aquapocalypse but by the time I managed to get some water samples to the lab they had started heavily chlorinating the water and no bacteria were left! Since negative results don't make for good blog posts, please enjoy this video of my silkworms dancing to Flo Rida's Right Round instead.

The Happiest Sheep Ever.

cwilcox | June 3, 2009
This image just made me grin like the Cheshire cat. Thanks, Allie (who, in turn, got it from Animal Planet's Twitter Feed)

edyong | April 30, 2009
Snowball, the sulphur-crested cockatoo, is an internet superstar. He's known for his penchant for grooving to music, notably Everybody by the Backstreet Boys. As the music plays, Snowball bobs his head and taps his feet in perfect time with it. If it speeds up or slows down, his rhythm does too. He is one of two parrots that are leading a dance dance revolution, by showing that the human behaviour of moving in time to music (even really, really bad music) is one that's shared by other animals. People who've attended parties at scientific events may question the ability of humans to move to a…

zooillogix | November 8, 2008
Speaking of animals commonly found in the US, we bring you the gray squirrel engaged in a typical fall ritual to prepare for the winter.

illconsidered | August 1, 2008
Posted just because I love this (besides, it's Friday, let's go dancing!) Where the Hell is Matt? (2008) from Matthew Harding on Vimeo.

May I Have This Dance?

grrlscientist | October 17, 2007
tags: dancing cockatoo, streaming video Snowball is a medium sulphur crested Eleanora cockatoo and he loves to dance and sing. He loves the Back Street Boys. No one taught Snowball to dance ... he just heard this song and suddenly felt like dancing. We're all jealous because he can outdance each one of us ... nobody likes a show off! When he's really in the mood, he dances and sings. And at the end of the performance he takes a bow or two or twenty!! Enjoy the show. [1:17] Thanks EVERYONE for sending this video to me during the past few days!
Advertisment