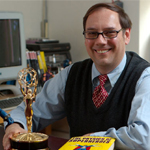 James Kakalios is a physic professor at the University of Minnesota, lecturer, and author of the books, The Physics of Superheroes, and the Amazing Story of Quantum Mechanics, which use science fiction, or speculative science, as a means to examine real-world science. Kakalios consulted on the Hollywood films Watchmen and Amazing Spider-Man.

I was interested in science in grade school.  TV programs such as "The 21st Century" on Sunday nights (an early forerunner of NOVA) and the Hall of Science at the New York World's Fair in the mid-1960's sparked an interest in science.  In high school, doubted that I had the chops for it, and was thinking of other majors in college.  A Trigonometry teacher, noting that I was doing well in his class, suggested Patent Law, as that combined engineering/science and law.  The more I looked into the science classes, the more interesting they seemed, and I wound up changing my major to physics in my first year of college.

What has been your primary area of interest, and why did you gravitate towards it?

As an undergraduate I worked in solid state physics labs, and really enjoyed the type of day to day projects that branch of physics entailed.  I had tried other fields of physics, but I just liked the sort of problems one dealt with in solid state physics.  The fact that this field also involved phenomena that led sometimes to practical applications is a bonus.

What do you think are some of the best ways to engage students when teaching science?

I like to pose questions, and have them work to come up with the answers. On a good day, I'll challenge them to predict the outcome of an experiment,and then I'll do the lecture demonstration to see whether they were right or not.  I work very hard to develop analogies - students will often forget mathematical equations, but will recall a solid analogy.

How did you get involved as a science consultant for Hollywood movies?

Through the National Academy of Science's Science and Entertainment Exchange. They had received a request for a consultant from Warner Bros. for a superhero film in pre-production.  Having written a popular science book (THE PHYSICS OF SUPERHEROES), they thought of me.

The film was Watchmen, and while my physics input was not that great, I was able to use the interest in the movie to make a short video demonstrating basic quantum mechanics principles, as it applied to a character in the film, Dr. Manhattan.  I've reached more people with that video than I would teaching in a classroom for over 18 centuries!

How does real science enter into better science fiction in movies, especially when the movie takes place in a complete fantasy world?

Any time the audience is questioning the science or the reality of a research lab in a movie, is a moment when they are not paying attention to the story.  Hollywood has a vested interest in getting the science just right enough that the audience stays engaged in the story.  I don't expect 100% accuracy in a science fiction or superhero movie, but really bad science can hurt a film.  And if you have some correct science in there, it's like an inside joke or easter egg, that you can then share with others.

How can teachers use movies to teach science concepts?

Have students quantitatively analyze what is on the screen.  When Superman flies around the Earth to reverse time, have them estimate his height above the Earth's surface. Then one can calculate the distance traveled in an orbit.  Time how ling it takes him to complete an orbit, and you'll find that when he changes the flow of time, he is actually flying FASTER than the speed of light!  Because, of course, they couldn't put it in a movie if it wasn't true! ;-)

How do you think we can better encourage and inspire the next generation to become scientists and engineers?

To think quantitatively about the world around them.  Some students think physics and chemistry only hold in the lecture hall, and have no relevance to their everyday lives.  But if one can analyze and discuss real science in a superhero or science fiction movie or television program, then who knows, it may even be useful in the real world!

What inspires you in your work?

Problems that I don't understand.  There are phenomena in my little sub-speciatlty that have been around for 50 years, and I don't really get how they work.  This bothers me, and every day I take a crack at trying to figure this out.

What advice can you give to science and engineering students?

Which we scientists call... job security!  We'll never have ALL the answers. Science provides us the mechanism to go about figuring out what the answers look like.

Now Get Back to Work!

Enter the Kavli Science in Fiction Video Contest by March 21, 2014. Follow this link for details.