In the future, stem cells created from our own skin cells will be used to renew damaged organs or grow new ones. We know this promise has often been made before, but the latest research in the lab of Dr. Jacob (Yaqub) Hanna is producing some solid findings that may make you believe in the possibility.

Just a little over a month ago, we reported that Hanna and his group had discovered a “brake” that keeps our cells from easily reverting to an embryonic-stem-cell-like state (induced pluripotent stem cells, or iPS cells). Removing that brake enabled them to ramp up the conversion process – in which inserting four genes into adult cells causes them to revert – from less than 1% efficiency to 100% efficiency.

Now they have refined the process further, producing iPS cells that are nearly identical to the earliest natural human embryonic stem cells. What is the difference between previous versions of iPS cells, which have been shown to differentiate into any number of different cell types, and the new ones?  It is the difference between cells that look a lot like embryonic stem cells, but still hold on to the ghosts of their previous forms (priming) and those that are naïve – that have no clue whatsoever as to what type of cell they “want to be when they grow up.” As an added bonus, the new cells can be kept for longer in their stem-like state, which should make them easier to use.

What Hanna and his group have done is to improve the recipe. The original four genes are still the basis of the reprogramming, but by adding another step or two, a carefully measured teaspoon of this and a pinch of that, they have taken things several steps closer to perfection. 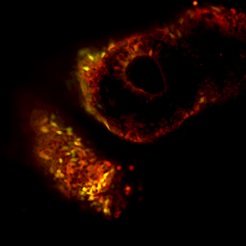 And the proof, as they say, is in the pudding. Or in this case, a “humanized” mouse embryo grown in the lab. Inserting the new iPS cells into a mouse blastocyst – a tiny ball of naïve embryonic stem cells – produced an embryo containing identifiable human tissue alongside the mouse tissue.

The next step, of course, is directing the differentiation of the embryonic tissue to produce specific human tissues and organs. Hanna and his group are already on it.