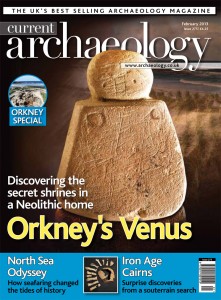 Current Archaeology #273 (Dec) has an interesting feature on an 18th century ship of the line found hidden as a construction kit under the floor of a workshop at a naval dockyard in Kent. The timbers were re-used, but not in an economically or structurally rational way. Instead the greatest possible amount of ship's timbers had been crammed in under the floor. Markings on them and historical records identify the ship as the HMS Namur, famous in its time for the battles it fought. It was launched in 1756 and broken up in 1833-34.

Investigators have put forward an interesting suggestion as to why the Namur's timbers were deposited in such an unusual manner. At the time when the famous ship was broken up, the head of the dockyard where it was found was a man who had served on it as a boy at the Battle of Cape Vincent in 1797.

In the same issue, I also enjoyed a feature on early industrial archaeology along the 1819 Tavistock Canal in Cornwall, where excavations have documented early non-standard engineering designs.

CA #274 (Jan) looks back at two decades of the hugely successful archaeology TV show Time Team, whose last season is now being aired. This is a very big deal in UK archaeology, and the show's death throes has been covered incessantly by all of the popular magazines I read. Let's hope the awful "History" Channel will not be all the archaeology TV can offer in the future.

In a fascinating feature on excavations at the Royal London Hospital in Whitechapel, we learn about the habits of 19th century anatomy students. This is one of the more grisly sites I've heard of, but the reason it can't compete with Mesoamerican ritual murder sites is that thankfully these bodies were dead when they were cut up. Many burials at the Royal London site contained recombinations of dissected body parts, and some included dissected animal carcasses as well. Nevertheless, burial was orderly and attempts were clearly made to put a complete body together in each coffin, although not all parts would come from the same individual. Frankenstein stuff! 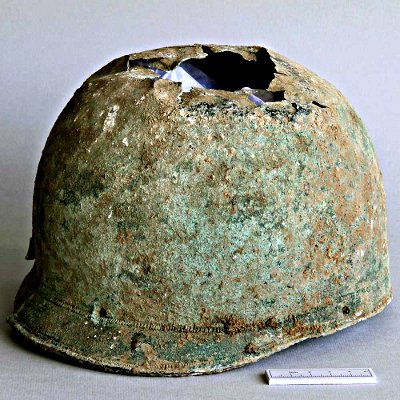 CA #275 (Feb) is an Orkney special but also announces the coolest cremation container I've ever seen, found by a Canterbury detectorist: a 1st century BC Gaulish copper-alloy helmet. It looks a lot like an old moped helmet and contained a fibula along with the cremated bones.

Robert Van de Noort's new book North Sea Archaeologies, despite the redundant po-mo plural (oh, how I hate those), seems quite fascinating judging from CA's write-up. Van de Noort envisages long-distance trade and travel as important rites of passage, indeed as real foundations of political power, for leaders across Northern Europe during Prehistory. And I was particularly struck by the maps of the North Sea's late glacial and post-glacial shorelines, where so much that is now under water was dry land. The Thames and the Rhine were once tributaries of a much larger river that flowed south through the valley we call the English Channel! And as late as 5000 cal BC much of Dogger Bank between England and Jutland still formed a huge island.

I always enjoy reading Chris Catling's columns, mainly because he writes well but partly because I agree with his politics. I find the opinions of CA editor emeritus Andrew Selkirk far less appetising, which sometimes makes reading his otherwise interesting contributions a bit of a chore. Selkirk is a Tory and appears to believe that the public sector should be funded by voluntary donations from the rich. He loves amateur archaeological societies and is on record saying that at least some rescue archaeology should not be developer-pays, but taken on for free by local amateurs. In CA #275 he gives an interesting run-down of who controls funding in UK archaeology, and opens with this gem:

It is a common complaint that our society has become too unequal. To an archaeologist, of course, this is nonsense. Compare our society to the pharaohs of Egypt, or most past societies, and we are remarkably equal. No one can afford to build a pyramid today, and even a cat may look at a king. Thinking that society is being made more equal by taking from the rich and giving to the poor is a big fallacy, I fear. In practice what happens is you take money from the rich and give it to bureaucrats.

Ain't that lovely? We shouldn't complain about inequality as long as things are better than in Old Kingdom Egypt. And anyway, redistributing wealth is useless since it will only feed those pesky public sector officials.

British Archaeology #128 (Jan/Feb) has a nice feature on an exceptionally well-preserved Neolithic settlement near the Ring of Brodgar in Orkney. Lots of worked-stone architecture, some even retaining paint, and various decorated small finds. Then there's a "goodbye Time Team" feature and a feature on messages carved into the bark of still living trees near a Salisbury Plain military training ground by soldiers heading for the 20th century's wars. “Arborglyph” is apparently the word you're looking for.

“Arborglyph” indeed. There is a disused salt mine in France whose tunnels were used to shelter and hide many of the British troops prior to a big WWI battle. The walls retain the messages written on it by long-dead tommies like a time capsule.

I am pretty sure that "nobody could build a pyramid today" is also incorrect. I suspect it would cost a few billion (an advocate of the "internal ramps" hypothesis claims 5 billion USD) but the world's richest people claim net worths in the tens of billions. if people believed it would make them immortal I expect we would see dozens going up worldwide. What deters modern pyramid-builders is theology, not capability.

Interesting about the North Sea land or as it nowadays are called Doggerland. There are several sites on the net about this fascinating submerged landscape.