Secrets of the Runic Lion

The Lion of Pireus is a large 4th century BC marble statue that was moved from Pireus, the port of Athens, to Venice in 1688. It is now at the city's Arsenal. The Lion has unmistakeable Swedish 11th century runic inscriptions which have been known to Scandinavian scholars since 1798/99. Clearly they have something to do with the Varangian Guard, Swedish soldiers in the employ of the Byzantine Emperor from the 980s onward. But due to poor preservation, the message carried by those runes has been believed lost.

There is a cast of the Lion at the Historical Museum in Stockholm, and I've often pondered its silent message and felt frustrated. But frustrated I am no more! Thorgunn Snædal has done what every really good runologist must do: gone to the original and studied it. And re-studied it. And re-studied it again. She's visited the Lion in Venice four times and spent a total of ~85 hours with it. And now she's published her new reading in an Open Access report from the National Heritage Board (in Swedish). 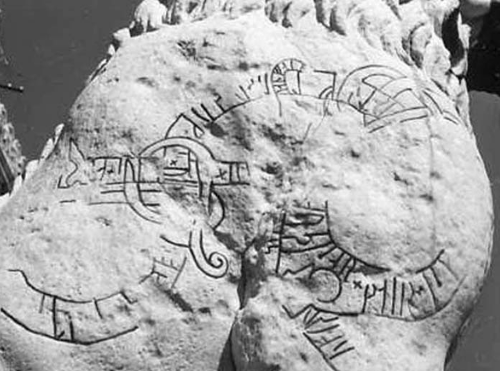 they carved, the troopers … and in this harbour, these men carved runes after Horse the farm-owner … Swedes had this done on the lion. Fell before he could take a ransom.

Snædal emphasises the skill with which Åsmund composed the third inscription, judging that he was actually a better rune master than e.g. Uppland's prolific Öpir (though there may have been two masters of that name). She hopes that one day we will find a signed stone by Åsmund at home in Svealand. This is not by any means casual graffiti.

The new reading says a lot about the men who made the inscriptions. The first group is commemorating Horse, who has died early during his tour of duty, much in the same way as his family would on a runestone back home. But they're also emphasising their own identity in the alien environment in ways that we never see at home. They juxtapose Horse's Swedish farm-owner status with a comment on the amazing ancient naval harbour, no likes of which could be seen in Sweden, then explicitly identify themselves as Swedes. It is a highly martial monument, re-using a huge fierce lion and created by men who identify themselves as troopers and young warriors who can't be certain that they will live to ever see Sweden again. Over a period of at least 50 years, two other groups of Varangians take the time to add inscriptions to the lion, suggesting that it was painted in, remembered and talked about as a must-see sight for any Swede in Pireus. As it should be today for any Swede in Venice.

Yes, all very convincing of course...That is until you recall the runic stone in the Dublin museum which various scholars had read as a warning of invaders from the North. Until one day, with the sun at an angle that enhanced the shadows, a caretaker read the true meaning, which was in English and said: "Am very drunk today".