I visited Grödinge church south of Stockholm for the first time Thursday. The occasion was my great aunt Märta's funeral, an event which, though of course sombre, cannot be called tragic. The old lady was always cheerful and friendly, but by the time she passed away she was 104, severely disabled, and according to her many descendants quite tired of it all. As I like to say, I don't fear death but I certainly don't want to become disabled or isolated in my old age. For most of her remarkably long life Märta was in fine shape, and she was never isolated at all.

Grödinge is one of Sweden's many thousand Medieval churches, and in those there are always innumerable details to catch the eye of anyone with an antiquarian bent. From my pew I looked at the 17th century funeral arms that so commonly adorn the walls. We were in the eastern bay of the nave with four sets of arms commemorating members of the Rosenhielm family, who have roses cheerfully sprouting from their heraldic helmet. But on the north wall of the chancel I could just make out two arms with what looked a lot like... an heraldic snail. After the service I looked closer and found that this was in fact the case. And I soon realised that it's a funny case of folk etymology gone heraldic.

The plaque under the arms in the picture reads “Here lies buried the late Honourable Lord Lars Sneckenfeldt of Sneckstavyk, His Majesty's trusted servant, born into this world in Stockholm in the year 1621 on the 23 April, and deceased in Our Lord at Sneckstavyk the 10 June 1664”.

Lord Lars was Lord High Chancellor Axel Oxenstierna's secretary and the first nobleman of his line. His manor was the first one in the parish to receive säteri tax exemption. The property went back at least to the Viking Period or more likely the 6th century, and had previously been named Brötsta. Säteri manors however often received new names, and Snäckstavik (as we now spell it) is typical of the genre. The new manorial name referenced a nearby inlet of the Baltic Sea, Snäckviken, and the new noble line's name referenced that of their manor.

But why a snail? Well, Snäckviken does mean “Snail Inlet” in modern Swedish, now as in the 17th century, and that is how Lord Lars interpreted it. But as we now know, this place name is almost a thousand years old. And in the 12th century, Snäckviken meant “Warship Inlet”. Names with snäck- dot our coasts and have plausibly been connected to the nascent Swedish kingdom's naval organisation of the 11th and 12th centuries, the ledung. I'm sure Lord Lars would have been happy with a warship as his heraldic symbol. But as it was, he got something quite unique thanks to a misunderstanding. 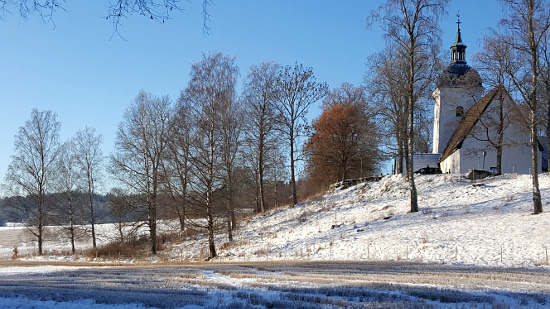 Snails each have two genders, just like earthworms, which is a clever way to organise things, no need to have different colors for toddler's clothes, no gender-segregate bathrooms.
Marine snails sometimes have interesting nerve toxins, occasionally attracting the interest of pharmaceutical companies.
But my favourites are the much smaller tardigrades.