The microbiology of zombies, part V: beware the bite?

Now that seemingly the flu outbreak storyline has been wrapped up on The Walking Dead (unsurprisingly, but disappointingly, with their ineffective treatments proving to be miracle cures), there's still one more zombie microbiology topic I'd like to cover: what's up with the bite, and is it the cause of death? I said previously:

"We know the pathogen can certainly be spread by bites and then cause zombification that way..."

but one commenter disagreed, noting:

"I don’t think we have evidence for that from the show. I think it clearer that zombie bites cause death, and there doesn’t seem to be evidence that the agent that causes death also causes zombieism (or vice versa). In Walking dead, any death is a sufficient condition for becoming a zombie. I would guess that zombies cause death because of a massive polymicrobial infection/sepsis."

So, could death be due to massive sepsis (an overwhelming immune response to infection, which can lead to organ failure and death) via the bite, rather than the introduction of a specific zombie pathogen? It's certainly not the first time I've seen that argument. Even the Zombie Research Society has put that forth as a hypothesis (and Matt Mogk has written of it in his book as well). However, I don't buy it for a few reasons.

First and foremost, human bites simply aren't that deadly. Even in a study of patients presenting to emergency rooms (which are probably the most serious of bites), none were found to have sepsis. Well, you might say, maybe more would have had this if antibiotics weren't available, which would be the case with TWD (well, except now they have them, but I digress…) A Medscape article addresses this, noting that prior to the antibiotic era, up to 20% of bites caused amputation of a finger--but still, a local nasty infection, not necessarily sepsis. Even in a 1936 NEJM paper studying bites, only 2 deaths are noted, and both are in "delayed cases"--individuals who waited 5 days post-bite to present to the hospital. In these cases, the cause of death is indeed listed as "extensive sepsis."

However, it should be noted that hand bites in particular—the subjects of those papers and articles above-- seem to be rather nasty. Per Medscape again, "... most human bite injuries occur on the hands, and hand wounds from any cause have higher infection rates than do similar wounds in other anatomic locations." So, these papers focus on the worst types of bites (hand injuries) at the most severe locations (presenting to emergency rooms), and thus should be considered likely a worst-case scenario for our potential infectees: that, even if bitten, a minority of them would have serious complications, and a minority of those might perish of sepsis. This doesn't match up with what we see in the show.

You might argue that the process of zombification would modify/increase the nasty bugs living in the mouth. I agree--rotting in this manner certainly could alter the presence and types of organisms that would be present in the mouth, and therefore possibly make them more deadly and more likely to result in a sepsis death of the bitten. However, even accounting for rapid reproduction rates for microbes (mostly bacterial when you’re talking about sepsis and oral germs), this doesn't seem to be a satisfactory answer, as one can quickly die and be reanimated and immediately have the potential for a deadly bite. It could also be argued then that therefore *everyone*, living or dead, would also possess this quality in that case--it shouldn't matter if the bite is from a zombie or from a living person; the result should be the same (sepsis and zombification).

Further, in the human bite literature, there are two types of bites typically described: occlusive bites and clenched-fist injuries. The former is probably what you think of when you think zombie bites: mouth open, teeth coming together on the skin, chomp, chomp, chomp. Clenched-fist injuries are what happens when someone strikes another person’s teeth with, as the name suggests, their clenched fist, often scraping the knuckles: basically, a punch that strikes the teeth/mouth. While on the Walking Dead the former universally mean death (except in the case of really quick amputation of the bitten part, like we saw with Hershel’s leg), we’ve seen many examples of the latter—how many fistfights has Rick alone gotten into now? Not to mention, scenes like this: 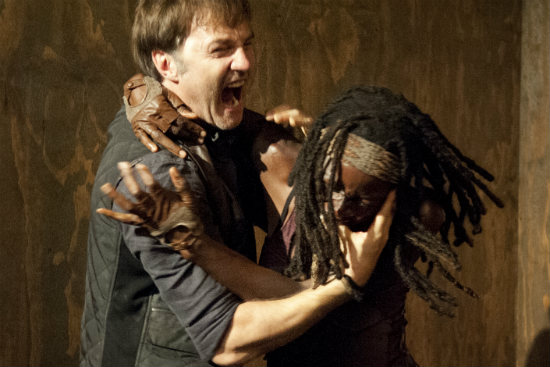 So if one is going to support the “polymicrobial infection as a result of bites” scenario for zombification, the issues of living biters need to be explained away as well.

Others have argued along similar lines regarding bites and sepsis, suggesting that the zombie bite is analogous to what happens to the prey of the Komodo dragon:

"Animals that escape the jaws of a Komodo will only feel lucky briefly. Dragon saliva teems with over 50 strains of bacteria, and within 24 hours, the stricken creature usually dies of blood poisoning. Dragons calmly follow an escapee for miles as the bacteria takes effect, using their keen sense of smell to hone in on the corpse."

The problem with that analogy is that it's based on a myth. That's not what really happens: the dragon actually has venom, as I noted way back in 2005 (and Ed Yong updated recently, both based on the work of Bryan Greig Fry). It's not their bacteria that kill their prey, but their venom. Do zombies suddenly become venomous? Doubtful. So, another idea shot down.

To me, the most convincing scenario, and the one that seems to jibe with both the idea that everyone is infected and with the little we know about the epidemiology of the outbreak, is that the immune system keeps the “zombie virus” under control while one is still alive and healthy. When one dies, the virus is allowed to replicate unchecked, resulting in both zombification/reanimation as the infection proceeds unabated throughout the body. The virus would also replicate (probably within the salivary glands) in order to enable transmission to the next bite victim. A zombie bite then introduces a large amount of this virus right into the bloodstream of the target, which overwhelms the body’s defenses and is responsible for both death and subsequent zombification—like rabies virus on steroids—and the cycle perpetuates itself.

Bottom line is that with the sepsis model, you have to explain more anomalies than with a virus-death model. You'd need to postulate immediate changes in the oral microbiome that aren't readily accounted-for, but would be responsible for the 100% fatality rates upon receiving a bite (but ONLY a zombie bite, and not a live-human bite), while with the novel zombie virus model you get a bit more carte blanche to account for the transmission and certain death. That seems a much better explanation to me.

Part I: the microbiology of zombies

Part II: ineffective treatments and how not to survive the apocalypse

Great stuff!! I have reblogged it (mostly) at Scoop.it Virology News, because I have a really soft spot for zombies.

Pathogens in Komodo dragon mouths aren't a myth. The study that found otherwise is based on samples from the mouths of CAPTIVE dragons that eat cleaner food and take antibiotics. Wild dragons have far more dangerous stuff in their mouths. http://www.ncbi.nlm.nih.gov/pmc/articles/PMC2888571/

Of course they have bacteria in their mouths--that's not in doubt. What's a myth is that's the only way to kill prey, when the 2009 Fry et al paper demonstrates venom as a more probable mechanism.