Why didn't Baumgartner burn up on re-entry?

By now everyone's heard of Felix Baumgartner and his record-breaking leap out of a balloon some 24 miles over the New Mexico desert. While the "official" definition of outer space is generally considered to start at either 60 miles or 100 kilometers, Felix's leap of some 39,045 meters is in many respect a drop from outer space. He was above essentially all of the atmosphere, the daylight sky above him was a black starry void, and he had to wear a spacesuit to breathe.

So why didn't he burn up on re-entry? The physics-savvy among you may scoff at such a question, but it's one that a lot of people had and it deserves a serious answer. It's also a great chance to clarify the difference between "in space" and "in orbit", which are two related but very different concepts.

So, what's an orbit? The best explanation probably involves Newton's cannon. If you fire a cannonball, it will sail through the air until eventually gravity brings it crashing to the ground. If you load in even more powder, it will sail farther still. The farther it goes, the more the horizon will curve away under it. 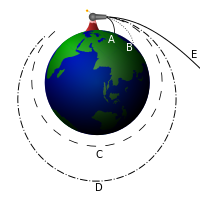 Fire the canon hard enough, and the fall of the cannonball due to gravity will be exactly counterbalanced by the fact that the horizon is dropping away from under it.

This is an orbit. You can reach very high altitudes - even into space - without going into orbit. Orbit is fundamentally about sideways motion, and while it's a nice way to stay in space around a massive planet, you don't have to be in orbit to be in space. You can just hitch a balloon ride or whatever other method you prefer to take you straight up.

To get into orbit you need to be going sideways pretty fast. As it happens, the velocity for a circular orbit is

Plugging in orbital velocity, that's a solid 31 million joules per kilogram. The potential energy due to gravity is just*

This is about 380,000 joules per kilogram, a much smaller number.

Of course there were a million other ways for the jump to have gone horribly wrong, and the Red Bull team deserves great congratulations for pulling it off. I'm don't usually pay a lot of attention to commercial stunts, but I tip my hat to this one.

*(g is effectively the same in low orbit as it is on the ground. If the earth were the size of a basketball, the space station would orbit perhaps a centimeter above it)

so if the space station was somehow stationary above the earth and you stepped out the door you would fall like Baumgartner? How far/high would you have to be before this did not happen?

@Bob
Yes. You'd have to be an infinite distance away from the earth for you to feel no gravitational force from it, although at long distances it would be unnoticeable and you may feel stronger gravitational forces from nearby objects in different directions.

Roughly, the "sphere of influence" where the earth's gravity is the strongest pull is about a million kilometers or so in radius. Past that, you're no longer going to fall toward the earth. You'll be in orbit around the sun.

A million kilometers is a long way - it's past the orbit of the moon (as you'd expect). But I'd say that distance sets the theoretical maximum jump height.

Bob - of course there are a lot of variables to consider in answering that, but a fall from 100 Km would yield a velocity approaching 5,000 Kph (point mass, ignoring drag for most of the fall), and aircraft like the SR-71 get hot enough to burn at those velocities. So you'd probably be significantly heated by a fall from where "space" is usually considered to start.

Even if one has heat shielding, falling straight down into the atmosphere from a sufficient height will be fatal, either because one hits the ground, or because one decelerates fast enough to avoid that, but then is killed by that deceleration.

Reentering from orbit, the trajectory is nearly flat, so the deceleration occurs over a span of thousands of miles. A slight amount of lift enables the vehicle to prolong the entry, reducing the peak deceleration even more.

More interestingly if ALL the dissapated kinetic energy went into internal body heat: assume he is made of water 4.2 Joules per degree C, and he would heat up by ninety centigrade! Clearly most of the heat was conducted away. I suspect some was dissapated by fluid motions (and shock waves) at some distance from his spacesuit/body.
Some questions that might be interesting to know:
At what altitude did he reach max velocity (i.e. drag equals 1g)?
What was his maximum aerodynamic drag? And at what altitude?
At how altitude decelerating did he drop back through the sound barrier?
Did he reach dense air quickly enough he coulda made it without an oxygen supply (i.e. the air in his lungs and bloodstream would be enough for a minute or two)?

Now, a space station in geosynchronous orbit must have a component of "sideways" velocity the same as any other object in orbit. In this case, the orbital velocity simply matches the speed of the earth's rotation, keeping the same point on the earth's surface directly under the station. If you were on the station, you would share this velocity. Stepping off of the station does not change your velocity, since no external force acts on you upon your departure from the station. Therefore, since your velocity remains unchanged, you would also be in geosynchronous orbit, and you would not fall to the earth.

with respect to Bob's questions and the comments, lets not forget geosynchronous orbits. If you orbit the earth at the altitude of 22,000 miles, then your orbital period (time it takes to circle the earth one time) is 24 hours. As a result, you are stationary with respect to the earth's surface. Also, you are still subject to gravity, in the same way that any orbiting body is subject to gravity. But you don't fall to earth.

I've read the article a few times now and other than a number of very interesting formulas, the author never explicitly answers the question. In direct layman's terms and without any math.....why didn't Baumgartner burn up during his fall?

Basically, he didn't burn up because he wasn't moving fast enough. A spacecraft returning from orbit requires heat shielding because it's moving much faster than Baumgartner was. Baumgartner's speed came solely from falling, that is from the gravitational attraction of the earth. A spacecraft's speed comes from falling plus its orbital velocity.

jazzman, it's because he wasn't going fast enough. He went up, had zero speed, then started falling. If he had gone further up, or if he had been coming from space with a large velocity, he would have burned up. Thrusters could be used to slow down enough to avoid burning up. Another answer pointed out that burning up isn't the only option. We can dive into a pool from a diving board, but jumping off a high bridge will kill us on impact because the deceleration is too great. Similarly, at too great a speed, an object can simply tear apart, an we can be killed from the deceleration of hitting the atmosphere.

The issue of near-vertical reentry has application to the safety of proposed orbital elevators (very strong tethers that extend up to geostationary altitude, on which a vehicle would climb). If the "car" fell off the elevator, there is a range of altitudes over which the passengers would die, even if the car had shielding that could prevent them from burning up on reentry.

For safety, the elevator car would need a rocket system. Close to Earth, the rocket would fire as it approached the atmosphere, slowing it to a survivable speed. If the car fell off at higher altitude, the rocket would be fired sideways, giving the car enough orbital angular momentum that it could reenter at a grazing angle (or even stay in orbit).

(I leave for the reader the problem of finding the altitude at which the first mode transitions to the second.)

Why don't space vehicles fire there rockets prior to entering the atomospere in order to stop their orbital velocity? This way they could avoid the dependence on heat shielding materials such as the ones that failed on the Columbia Space shuttle.

(even if you are already in free fall in orbit) If you jump out from ISS, you have to slow down your speed to get down to earth towards earth. you need some rocket jets to do that. Any object on earth that is getting speed up, must move up ! To move down (fall) you have to decrease ! beamgartner falls down because air friction at this altitude slows him down. higher, you must use jet brakes !

matt I have a question about the atmospheres and flight not dissimilar from your Iron Man article.