The release of carbon dioxide to the atmosphere by the burning of fossil fuels is, conceiveably, the most important environmental issue in the world today. 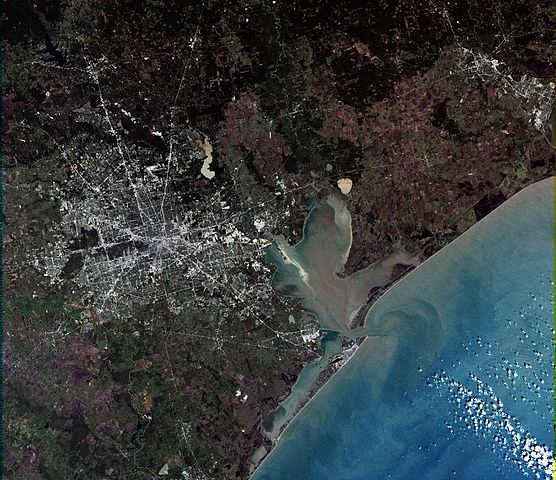 Actually, the scientific understanding of the dangers posed by rising CO2 levels date back much further — at least 100 years — but 1979 was a watershed year, with all sort of reports and high-level meetings organized in response to the growing recognition that we had a serious problem on our hands. Since then, no major corporation, government or organization can justify being taken by surprise by what's happening in Houston this week. Eric Holthaus puts it bluntly in Politico Magazine:

Wagging an "I told you so" finger isn't very helpful, though, and it's not Holthaus's main point. That would be pouring cold water on the idea that adaptation is a viable response to the mess we're in. "Incremental" tweaks to the prevailing model for civilization aren't going to cut it. He's talking about the model in which large numbers of humans pave over large portions of the Earth with impermeable surfaces, not to mention doing exactly that in service of vast, sprawling industrial operations dedicated to the conversion of fossil carbon chains into liquid fuels.

Adapting to a future in which a millennium-scale flood can wipe out a major city is much harder than preventing that flood in the first place. By and large, the built world we have right now wasn’t constructed with climate change in mind. By continuing to pretend that we can engineer our way out of the worsening flooding problem with bigger dams, more levees and higher-powered pumping equipment, we’re fooling ourselves into a more dangerous future.

We will have to adapt, of course. More and more scientists have already turned their attention from the study of climate change to the provision of "climate services." This embryonic sector is less interested in mitigating global warming, a certain degree of which is now baked into our ecosystem over the next few decades regardless of what we do about our carbon emissions, than in helping communities and corporations anticipate the effects of that warming and minimize the consequences. To be fair, most of these scientists-turned-consultants are also genuinely worried about the consequences and very much support aggressive mitigation efforts; it's just that they know we are way past the point of no return on threats like sea-level rise, desertification, and catastrophic flooding.

But Holthaus and many other professional observers are calling for much more dramatic changes to our standard operating procedures than just making sure new developments aren't built in floodplains. They're talking about abandoning not just poorly-cited buildings, but entire communities. It is really hard to deny, if you want to be honest, that there are portions of New Orleans that simply shouldn't be rebuilt, but left instead to the mercies of the ever-wandering Mississippi, land subsidence and the rising waters of the Delta. Likewise, the summer homes of the Outer Banks of North Carolina are probably not worth saving. Do desert cities like Phoenix and Scottsdale, Ariz., or Las Vegas, Nev., really make sense in the long term, what with the cost of importing water?

Pretty soon, for some communities, the only responsible answer to the question of "What do we do to combat the looming effects of climate change?" will be "Leave." No one is keen on going there first, but it is inevitable. Most of us won't turn into climate refugees, of course. But there will be sacrifice enough to go around, especially if you're particularly enamored of private automobiles, golf, or beach houses. (Unless, that is, you're a member of the upper 0.1%, who will be able to hold onto those kind of affectations regardless of what we do to the atmosphere.)

The alternative is to continue to pay the 11- or 12-figure price tags of Houston-scale floods and similar not-entirely natural disasters. And along with the economic costs will come social and political side effects. If you think the country is polarized now, just wait a few years. Indeed, why not wait a little more? We've been putting off making the hard decisions for almost 40 years now.