Holocaust Denial from the White House

The White House in its statement on Holocaust Remembrance Day engaged in Holocaust denial. Then they doubled down on the action and via Reince Priebus on Meet the Press expressed no regret about the wording which had no mention of the Jews in their supposed "remembrance". This has been criticized from both ends of the political spectrum, from John Podhoretz in Commentary Magazine (a Reagan speechwriter and conservative columnist) to Tim Kaine characterizing it, correctly, as Holocaust denial.

You may ask, why is this denial? Is this hyperbole? You may even find the administration excuse that they are trying to be more "inclusive" of all the others who were victimized in the Holocaust plausible. And to the uninitiated it probably seems reasonable, and so the administration will likely get away with it.

But the reality is, this is part of a long history of Holocaust denial, in which the experience, memory, and truth of Jewish survivors and victims is diminished and denied. The first step of Holocaust denial isn't an outright denial of the Holocaust, the deniers have become more subtle in the decades since Paul Rassinier outright denied its existence in the aftermath of WWII. Holocaust deniers instead start with the exact kind of minimization and distraction that the White House engaged in with this statement. They say, "well, the Holocaust was about so many other groups, not just the Jews." This argument seems to have a patina of credibility, but on any real inspection it is foolish.

The Holocaust was a deliberate, systematic attempt by the Nazis to eliminate Jews from the face of the Earth. That other groups such as homosexuals, dissidents, and others despised by Nazis were also targeted does not change or diminish the fact the primary intent was to destroy the Jewish people.

These distracting arguments undercut the truth about the purpose of the Final Solution and are thus a denial of history and truth. They are the same as the arguments that diminish the numbers of victims, that suggest the Nazis weren't specifically targeting Jews, or inevitably, the crimes of the allies (such as the bombing of Dresden) were just as bad.

Deborah Lipstadt wrote a book Denying the Holocaust: The growing assault on truth and memory that is as relevant today as two decades ago. It a major influence on my writing about denialism because Lipstadt systematically exposes the tactics deniers used to subvert legitimate scholarship and scientific fact, which, it turns out, are pretty universal to denialist movements. One of the key points she makes is that denial doesn't have to start with dismissal of the entire horror of the Holocaust, but rather is a chain of lies that begins with the kind of minimization of the Holocaust such as the White House espoused on Remembrance Day. Lipstadt is now the focus of a film entitled "Denial" about a libel case brought against her by the Holocaust denier David Irving. Irving, like most deniers did not like being called a denier, even though it was true. Deniers know that to be a Holocaust denier is bad, and makes them bad people, so they like to pretend they're not Holocaust deniers even while they deny the Holocaust. Spoiler alert, she won, because Holocaust deniers are lying liars who lie.

Finally, you may ask, what proof was there this was purposeful? Should intent be included in the accusation of Holocaust denial rather than mere incompetence? Well, for one thing, when this was pointed out to the White House they defended the language twice - both Hope Hicks and Reince Preibus expressed this specific language excluding Jews was purposeful and a lack of regret that it specifically leaves Jews out of Holocaust remembrance. They deny that it was Holocaust denial but Holocaust deniers usually lie and say they're not denying the Holocaust. Second, we have seen a pattern from this administration of courting and hiring white nationalists, including Steve Bannon (also an alleged anti-Semite), and repeating propaganda from white supremacists (eg whitegenocide) and neo-nazis repeatedly during the campaign (anyone remember the "Sheriff's Star"?).

Chuck C. Johnson, who engaged in holocaust denial on a recent Reddit thread also claims to be advising the White House on nominees. Finally, you see how these signals from the White House are received by racists like David Duke and neo-nazis, who now represent the administration's most ardent supporters: 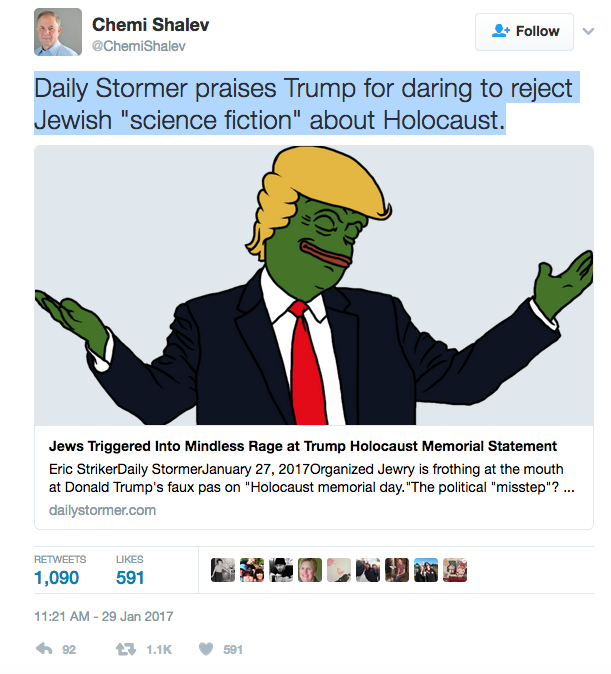 To summarize, this is classic Holocaust denial from an administration that (1) has been documented courting racists and neo-Nazis, (2) has a known white nationalist as a political advisor to the president, (3) has admitted the exclusion of the Jews from the statement was purposeful, (4) has expressed no regret about excluding Jews from the statement, and (5) received acclaim from neo-Nazis for the use of this language.

This is a clear-cut case of deliberate Holocaust denial presented on a day that was meant for remembrance of this specific history. It was accompanied by an attack on refugees, many of whom are fleeing murder and oppression, based on religion, which is horrifically reminiscent of this period of history. This will surely represent a low point in the history of our own country, and will forever stain the politicians and leaders who fail to speak out against this denial of history and human decency.

Discovered, a few weeks ago, on our third visit with them that some nice people we were "connecting with" were Holocaust deniers. Given, as we were walking out the door at end of visit, the Prussian blue, bombing of Dresden and inhuman conditions in Gaza "standard" statements to the denier "ilk". Shocked, afterward I researched the topics for the first time extensively since that last (and final for myself) interaction. First off, no "two state accord" can ever be attained in the Middle East. Why? One side (Hamas) refuses to "detract" from the "Israel must be destroyed" decree.
Second, deniers use every means "under the sun" such as pseudo-science and "fact juggling" to "prove" their stand.
A stand based firmly on hatred spawned by "green eyed" envy of the Hebrew people.
In case, one wonders, I am a Gentile.

Reince Norvegicus has always annoyed me, and now I see why. He is a fascist. Anyone who can stand next to Steve Bannon without screaming in his face that he is a sick racist pig is probably themselves a sick racist pig.

There is no doubt about it. Trump is trying to be world dictator. If he isn't brought down very soon, he is liable to bring down the US of A.

Luckily not everyone is as willing to tolerate dismissal of the magnitude of the Holocaust as our president. This is (IMO) well worth watching.

If you think the White House statement is Holocaust denial, the only conclusion I can reach is that you think "Jews" are not "people".

Calvin, you seem to lack reading comprehension. The entire point of this article is about how generalizing the Holocaust to "people" is Holocaust denial. Not just any Holocaust denial, but classic, done-a-million-times, this-is-how-this-always-starts Holocaust denial. The Holocaust was specifically about elimination of the Jews, not about killing people in general. I don't know why that is such a hard concept to understand unless you are being purposefully obtuse.

If you won't take my word for it, take that of Deborah Lipstadt, a pre-eminent historian of the Holocaust, she literally wrote the book on Holocaust denial. There is a movie coming out about her called "Denial". What did she say? This is classic "softcore" denial.

Saying "people" does of course include Jews, but to believe that is an adequate explanation means you have to be an ideological drone who refuses to acknowledge the history of removal of the Jewish experience from the Holocaust, the history of making this about "people" in general and not the Jews in particular, and to have basically not read my article, ignored Podhoretz's article, and to ignore the words of unchallenged experts such as Lipstadt.

I realize that the ideological drones can't acknowledge that Trump is wrong ever. And I'm sorry if you are so afflicted. But I'm not interested in debating with people who either can't read, or can't see facts due to ideological derangement.

August 13, 2017
Pseudoscience is effective. If it weren't, people wouldn't generate so much of it to try to justify opinions not supported by the bulk of the evidence. It's effective because people trust science as a method of understanding the world, and ideological actors want that trust conferred to their…

ACSH is astroturf, here's why

March 9, 2017
The American Council on Science and Health recently got some exposure on twitter, then a little too much exposure, after publishing this highly problematic (and hysterically bad) op-ed/infographic on twitter and on their site. This opinion piece, presented as if there is some method or objective…

Science always has been, and always will be, political

February 6, 2017
Inevitably, with the announcement of The March for Science on Earth Day, April 22nd of this year, come the inevitable naysayers decrying the politicization of science. Astroturf groups such as ACSH (diversity excludes white dudes and scientists from industry!), have of course decried the effort as…

Holocaust Denial from the White House

January 30, 2017
The White House in its statement on Holocaust Remembrance Day engaged in Holocaust denial. Then they doubled down on the action and via Reince Priebus on Meet the Press expressed no regret about the wording which had no mention of the Jews in their supposed "remembrance". This has been criticized…

November 24, 2016
Amanda Marcotte, who I've enjoyed reading since her days at Pandagon, was curious about what having a CT president might mean. For some crazy reason, she thought she should ask me about it. Briefly, I tried to summarize the patterns of thought conspiracy theorists engage in, their willingness to…