Are The Beginning And End Of The Universe Connected?

“What is wild cannot be bought or sold, borrowed or copied. It is. Unmistakeable, unforgettable, unshamable, elemental as earth and ice, water, fire and air, a quintessence, pure spirit, resolving into no constituents.” -Jay Griffiths

At the earliest times, we can trace the history of our Universe back to an inflationary state, where the energy inherent to space itself caused a rapid, exponential expansion. At the latest (current) times, billions of years after inflation ended and the Big Bang occurred, dark energy has come to dominate the Universe’s expansion. These two states are very different in magnitude, but they’re similar in a lot of ways, too. 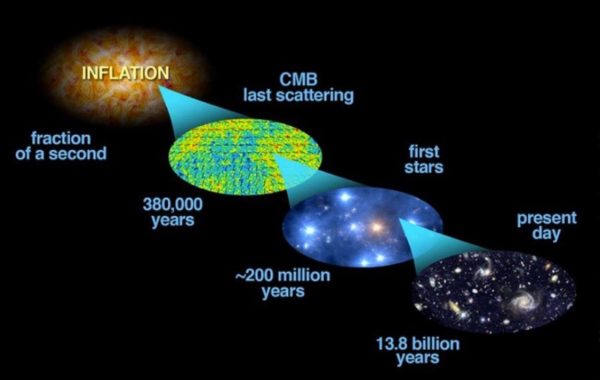 The hot Big Bang resulted from the end of cosmological inflation. But that still required the existence of space, time, and a large zero-point energy. Where did all of *that* come from? Image credit: Bock et al. (2006, astro-ph/0604101); modifications by E. Siegel.

They both drive the Universe towards a cold, barren, empty state. They both lead to an exponential state of expansion, inflating all other matter away. And they both may be inherently unstable, eventually decaying to a more stable state. But they could be completely distinct phenomena, too, unlinked by anything expect the coincidences we notice.

If inflation is like starting off at the "top" of a full soda bottle, then dark energy is like realizing the bottom of your bottle isn't totally empty. In both cases, there's an energy inherent to space itself; inflation's was much larger, but dark energy's is non-zero. Public domain images.

Are the beginning and the end of the Universe as we know it fundamentally linked?

Could space have an elasticity value or limitation, or a sort of breaking point at which the effects of dark energy would transition to the effects of inflation?

If dark energy isn't constant, and increases gradually over time, the expansion of the universe could eventually look like primordial inflation. Perhaps, once dark energy becomes that intense, it becomes less stable, and bits of it can turn into (relatively) slowly expanding bubbles of spacetime filled with energy and matter.

Of course, there's no evidence that dark energy isn't constant, so any change would have to happen over astounding lengths of time. But that's okay.

Also, just to be clear, I'm totally making up this scenario, not pushing it as a revolutionary new cosmology like some contributors prefer to do.