Kentucky is a Beautiful State

I'm back in Virginia again, after another successful trip. This time I was mostly in Kentucky, visiting various friends.

It's a shame that nowadays Kentucky is known primarily for bourbon, horse racing and creationism, since it's really a very beautiful state. Among my ports of call was Morehead, KY to visit my friend Robin. She's in the math department at Morehead State University. She showed me around the area, including a stop at this lake, right on campus: 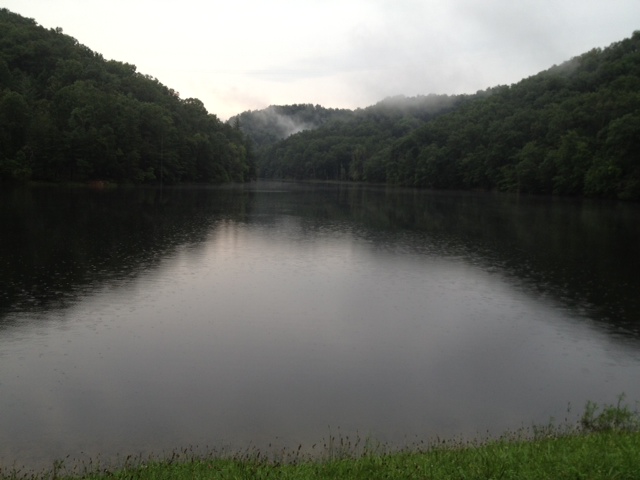 Not bad, but it was just a warm-up for what came next. Robin took me out to Lockegee Rock, in the Daniel Boone National Forest. It was probably for the best that she didn't tell me where we were going. Getting there involved a hike through the woods, which were muddy and slippery because it had poured rain earlier in the day. Then we came to some impressively vertical rocks that we proceeded to climb up. At this point I asked Robin, with some dismay, if we were planning to return the same way we were about to go up. Turns out we were.

Happily, though, it all looked worse than it actually was. And if you make it to the top of the rock you are rewarded with this: 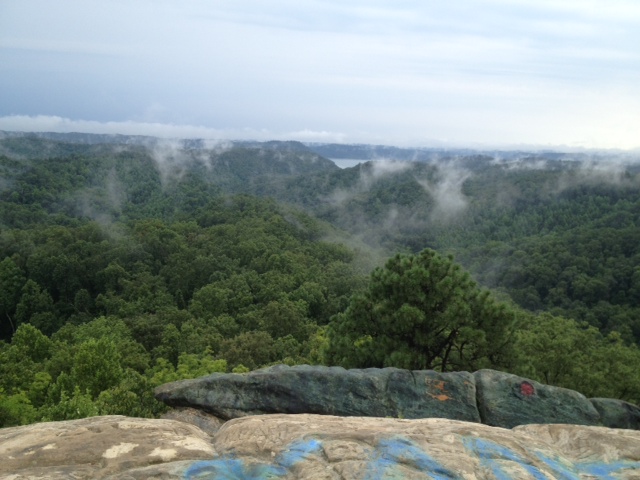 That's pretty spectacular, and I assure you the photo doesn't do it justice.

Speaking of spectacular, Robin's an excellent chef and insisted on serving me a home-cooked meal. So, taking a page out of Jerry Coyne's playbook, here's what we had for dinner the first night I was there: 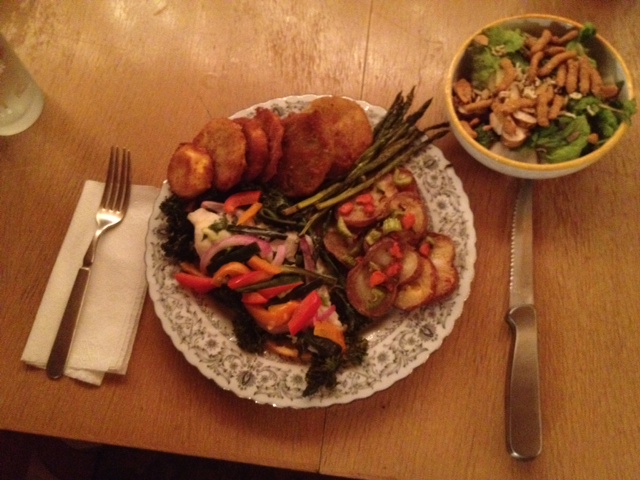 That's catfish served on a bed of kale surrounded by a variety of other veggies, a mixture of fried green tomatoes and fried squash, asparagus, and baked, thinly-sliced potatoes. Yum!

Oh, and I made the salad.

See what I mean by a successful trip?

My cousin could always cook!! And beware of her adventures, she has no fear!

It was a pleasure to have you! So glad you liked the food and made it up the wet sandstone to see the view at Lockegee! Next time you are on campus I'll include the bronze statues on our tour. Dora has agreed to my suggestion that we take a shelf in the department museum for mathematical objects. I may be arranging a competition for students and faculty with regards to that soon! So exciting, all the possibilities.

Cousin Ron! What a surprise! Hey, you are as adventuresome as I, both geographically and culinarily.

KY has a lot of beautiful state parks. Also a lot of mosquitoes in the summer. One of the interesting ones is Audubon park south of Evansville, IN. There are a few pages from an original folio of Audubon's book. They are simply beautiful to look at. Nice cabins there too.

And thanks for having me! You were a terrific host. I'm glad you'll be visiting Harrisonburg for the SUMS Conference in September.

I know just what you mean about having no fear. Robin was too polite to say anything, but I think she was rolling her eyes at me when I seemed skeptical about climbing up those rocks. As I pointed out to her, my main hobby growing up was playing chess. Way safer.

I have to admit, the first time I read your comment I thought you were saying that one of the most interesting mosquitoes in KY is in Audubon park . :)

I have spent the night in several KY state parks in tents or cabins and only winters kept the mosquitoes off. It was still worth it walking the parks and seeing all the beauty. I have never been to the one you visited.

Hey Jason you are a
"brilliant young professor of mathematics "

It’s a shame that nowadays Kentucky is known primarily for bourbon, horse racing and creationism...

What do have against bourbon and horse racing?