My cat, Emily, tends to get a bit sulky when I leave her for long periods of time. So when I returned home from New York the other day, having been gone for a week, I was not surprised when she did not greet me at the door. Par for the course, I thought. She'll appear on her own in five to ten minutes.

When fifteen minutes went by and she still had not appeared I decided to go hunting. My first pass around the house was unsuccessful. Emily was not in any of her usual hiding places. Then I heard meowing. It was weird since it sounded like it was coming from directly underneath the floor. I went down to the basement, and sure enough, I found my cat: 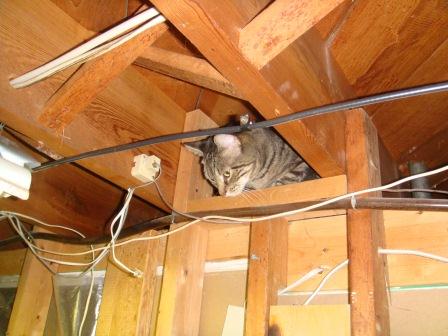 How did she get up there? Here's a wider shot, to give you some idea of the heights we're talking about: 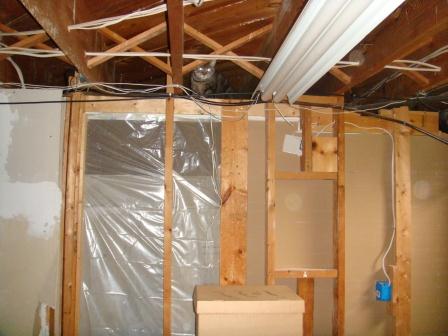 So, again, how did she get up there? I freaked out when I figured what must have happened. I'm currently having my main, upstairs bathroom completely redone, and much of the initial demolition work was completed while I was away. That included ripping out the old tub and removing the old tiles from the wall. That means there was probably a big hole in the wall for part of the time I was gone. Emily must have climbed in to investigate, and then got trapped when my contractor, oblivious to her presence, put in the new tub.

I no longer think that's what happened, but more on that in a moment. Emily didn't seem panicked at all, and she wasn't sitting in her own filth or anything like that. When I held out some food to her, she took it, but it did not seem like she was starving. So I decided she could not have been up there for very long.

That was some relief, but how to get her down? She could probably have just jumped, since the ceiling really isn't that high, but she seemed very reluctant to do that. She kept meowing at me and sticking her paw out. That box you see at the bottom of the second photo was part of a tower I built for her to climb down, but she mostly just gave me a “What's that for?” look. The armstrong approach -- in which I grab her by the scruff of the neck and yank her out -- was always an option, but I was hoping for something less drastic. Then I remembered there was a small panel in one of the upstairs closets that allowed access to some of the pipes. I removed that panel, and moments later Emily's little face appeared from underneath the floor. I looked despairingly at all the pipes between her and freedom, but I needn't have worried. She bent and twisted and turned and flexed and eventually did a little cat pull-up to extricate herself. Then she meowed triumphantly and acted as though this was her plan all along.

That takes care of that, I thought. I closed up the panel and the closet, and since the hole in the bathroom wall no longer existed I figured that was the end of it.

The following day my contractor arrived. Emily immediately ran away, since she always hides from noisy strangers. Whatever, I thought, let her hide. Then I heard a sound coming from the basement. The best description I can give is that it sounded like a cat climbing up a wall. I went downstairs, and sure enough Emily was back in her little nook. There's a table she could have used to get part way up, and from there I think she pretended that those wooden beams were trees.

This must be why people have their cats declawed.

For now I'm simply leaving that panel out and the closet door open. That way she can come and go as she pleases. I think when things get back to normal she won't be climbing up there any more, since that's the sort of place she only goes when she's hiding from especially scary strangers. Otherwise I guess I'll have to concoct some sort of barrier to keep her out of there, since I sure don't to have to leave that closet door open all the time.

Adorable! She looks almost EXACTLY like our little girl. Of course, ours wouldn't be caught dead climbing that high, while she responds to visiting contractors, gas company guys, etc. by heading right for them to ask if they're going to be one of her uncles now and explain how she prefers to be petted. It's an amazing thing about a cat that no matter what her personality is, we find it so adorable that we will cater to her every wish. :-)

As someone who is owned by 2 cats, I am constantly amazed, impressed, & frustrated by their ability to simply vanish in seemingly open spaces. As a fan of locked-room mysteries, I imagine that that cat-feature is equally interesting for you.

I'm confused. Is she Ceiling Cat or Basement Cat? This story seems to pose a deep theological dilemma.

A locked room mystery was exactly what I thought of when she got up there the second time! It's an old John Dickson Carr trick, making it seem like the impossible situation has been resolved, only to reveal that there is some other, unthought of, explanation.

Let her stay there for more than a day and she'll find a way to come down herself. That's what cats do. You are nursing her like a baby - quite humiliating, if you think about it, though I'm not sure for whom.

Babies are thought to be training parents to fetch and smile when they throw thir toys out of the pram.

PS you may want to lok into making a den of about the same size. It is comforting to a cat when the whiskers can feel the enclosure, as long as it is still ipen enough to allow quick escape and easy breathing. It may be her cat basket is just too darn big, and doesn't feel like a nest, but as an open and vulnerable plain.

Pretty tabby. Our has similar coloring, black stripes on brown, though she's a little darker brown. Which makes her pretty much impossible not to trip over in the dark.

eric - Yeah, ours likes to hang out on the wood-grain Pergo in the very dim little central hall of our house. I always tell her "Stripey brown cat ... stripey brown floor ... BAD IDEA!" She actually seems to me to put herself in the way of being stepped on to give people opportunities to demonstrate that they love her enough to be constantly looking out for her. When we go to the bathroom she will come running from nowhere to be sprawled in that hallway when we open the door. She'll creep up behind my husband while he's working in the kitchen and settle down to eat with her tail stuck straight out behind her, an inch behind his heels. He only has to take a careless step back once, and she'll be a Manx.

She actually seems to me to put herself in the way of being stepped on to give people opportunities to demonstrate that they love her enough to be constantly looking out for her.

Yeah, they definitely use 'interpose myself between the human and what they want to do" as a means of attention-getting.

But, I suppose that's better than the alternative explanation for this sort of behavior: (from this joke): Today my attempt to kill my captors by weaving around their feet while they were walking almost succeeded. Maybe I should try this at the top of the stairs.

There’s a table she could have used to get part way up, and from there I think she pretended that those wooden beams were trees.

That was my immediate surmise. My two, who are allowed outside, routinely go over 6 ft. wooden fences--jump about halfway up, stick the hold, and clamber to the top. The wood will probably show the claw marks (indeed, if she were to take a shine to one of the posts, it takes a cat little over a year to scratch halfway through a 4" × 4" working from the corner).

Yeah, I was skeptical of your "trapped in the wall" hypothesis right away. Seriously, having had cats for many years, I wouldn't have ruled out that she just freakin' jumped. A rube goldeberg idea featuring a cat wandering around in the wall, well it's possible, but way more plausible is that cats gonna be cats -- and that means getting in seemingly impossible places.

She could have easily jumped. My then-six-month-old kitten once made a totally vertical jump from the bathroom floor to the top of the shower curtain, to which he then attached himself like Velcro (claws!) and proceeded to look around with an expression of, "Oh, hello!" from the new vantage point. Would not have believed it had I not seen him do it.