Is there still room on the shelf for an almanac?

When I was a kid, I loved the almanac. I don't remember where they came from, but every couple of years a new one would appear in the house, and as soon as I got my hands on it, it moved into my room and anybody who wanted to look stuff up in it after that needed to see me first. And, actually, much of the time I could give them whatever info they needed if they just asked me, because I knew the contents. 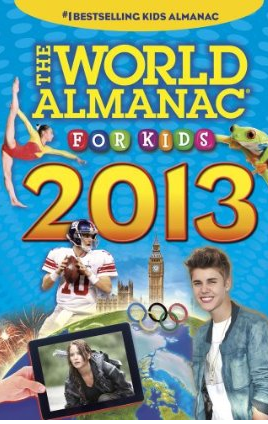 " produced by World Almanac. It has a picvture of a ballerina, a frog, a football player with the New York Jets, somebody who looks like he is on a TV show and a kid with a fancy hair cut, could be Justin Beiber. It has the Olympic symbol, Big Ben, and the "Tower of London" and a bit of the earth as well. On the back is a chimp, some nemo-fish, two young women and a young man who are probably all TV or movie personalities or singers, and the White House with a "Vote 2012" button.

I'm telling you all this because it gives a feel for what the book is all about: The inside is like the outside, with every page full of images, generally of young people all of whom are very pretty and healthy and happy and most important, well informed looking. There are graphics and diagrams and things to do. It is printed in cheapish paper which will allow you to feel OK about taking a pair of scissors to it or drawing on it, as needed. It is only the 2013 Almanac, after all. Use it up and then get a new one next year!

I'm not sure if almanacs are still useful or cool for kids because all kids in America how have smart phones or the equivalent. Right? Or maybe the Almanac is for kids who are poor and don't have internet access. Or maybe, just may be, it is for kids who still like books.

Or for parents who still like books to give their kids so they will maybe like books a little bit still.

Here is the publisher's writup:

The World Almanac® for Kids is the best-selling reference book for kids, with more than 4.4 million copies sold. Filled with thousands of fun, fascinating facts and essential homework help on a wide range of subjects, this annual, full-color almanac has been completely updated and fully redesigned, with a fresh new look, hundreds of new photographs, dozens of completely new features, and a wealth of puzzles, games, activities, maps, and much more. An ideal homework aid that is fun to read for kids and adults alike, The World Almanac® for Kids 2013 provides timely and timeless information on popular subjects such as animals, science, sports, music, U.S. history, and more. Readers will find out what's hot in 2012 with full-color photographs and facts about favorite sports and entertainment superstars!

At less than 10 bucks, I actually think this is a good Xmas present for kids in upper grade school or middle school. I do, however, have a criticism I'd like addressed in future editions. The "biology" section does not really have much on Evolution, and the "Famous Scientist" section does not have Charles Darwin as one of the biologists.

When I saw this I became enraged and spit all over the computer screen, naturally, but then I contacted the publishers for an explanation of this outrage. I was assured that they were not anit-Evolution or anti-Darwin, and that what was going on was quite different. They said that they rotated over time through subtopics, so even though Evolution was not part of the biology section this year, it could be some other year, and even though Darwin was not one of the scientists this year, he could be some other year.

This is wrong, of course. Biology IS evolutionary biology, and certain key scientists should always be mentioned because they are always part of the history of the science (until they are replaced, of coruse). What has to happen this: The editor has to talk to me now about next year's edition, and we can start working on how to ALWAYS have "Evolution" but at the same time always make it different and interesting, current and engaging. Same with Darwin and the other key scientists. We can make this work, and I assume that by this time next year when I'm asked to review this book for the kiddies, The World Almanac for Kids will have adjusted the way it presents life science to get it more in line with how life science works; key concepts and people are always there, and what changes is the new interpretations and new discoveries being made.

Living in Tx there is the Texas Alamanac that provides maps of the 254 counties with their road network as well as demographic details for each county. While it is online, it also is a good book to read. So its as much which almanac as well as do you need one.

I assume you're thinking of the Farmer's almanac (aka Yankee almanac), which google tells me still exists.

I haven't seen one in decades; I was always impressed how they could predict the weather months in advance. But back then I hadn't heard of el Nino (or Scalia for that matter).