Wonderful Life with the Elements

Have ever really thought about the elements? Have you ever really asked questions about them? If you are some kind of scientist or science geek, you probably know a lot about them, and that could even be a disadvantage for you, in a sense. For instance, if you learned early on that elements were formed at certain points in time and in certain places (the big bang or later in stars, for most atoms) then the following question may not have occurred to you: "What happens when a bunch of Carbon atoms get old. Do they fall apart?" Also, a sense of purity may be something you understand but others with less knowledge may not fully grasp. Breathing in "balloon gas" (which has some helium in it) can make your voice sound funny. Totally emptying out your lungs of all air and then filling them full with pure helium could cause you to be dead. Purity matters.

Every now and then you come across a book that takes the Periodic Table and transforms it into a learning experience about chemistry and stuff that can be really interesting. Wonderful Life with the Elements: The Periodic Table Personified

is the latest effort I'm aware of to do that. This smallish, square book (read: Stocking Stuffer for your nerdy spouse or child) by Japanese artist Bunpei Yorifuji seems to follow a recent trend in books to be very quirky, perhaps to compete with on-line methods of accessing information. One method of getting chemistry across to people is to redo the iconography or the spatial metaphors of the Periodic Table. In this case, the elements are depicted as drawings of people who have various characteristics. You can look at a drawing and using what you know (using rather complex keys) infer stuff about the elements from the individual's body, face, and clothing. A person standing there in their underwear may indicate an element useful in human nutrition. A person who appears to be dressed up in a robot suit is a human-made element, one that generally does not exist in nature, and so on.

Hair or hat styles relate to elemental families, and faces vary on the bases of the element's subatomic characteristics. The elements are standing on things that suggest stuff about their uses. So, for instance, you might have this: 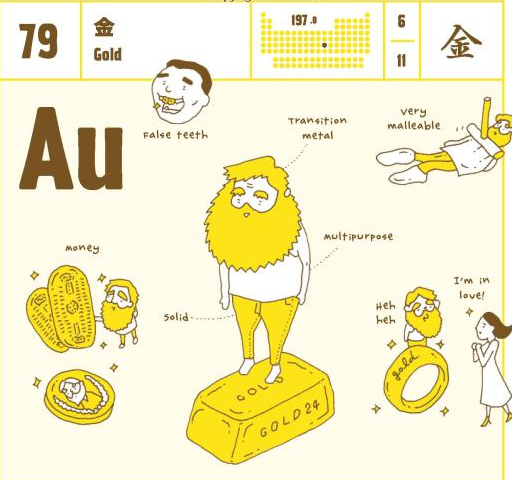 Gold has a big long beard indicating that it was discovered in ancient times. The figure representing gold and gold itself are a bit hefty of mass. Gold sports the hair style of a transition metal, and appears to be wearing Carharts, suggesting a multiplicity of purposes. There is quite a bit more information than this in this one figure.

The book comes with a nifty, full size fold out periodic table that I'm tempted to razor out and hang on my wall.