These are the tweets from the Montreal Police: 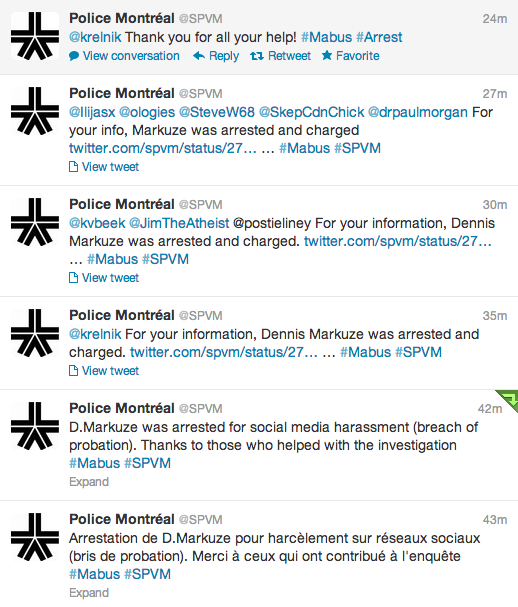 For those who don't know, Dennis Markuze is a perennial internet-only (so far) stalker who has been sending nasty emails and tweets to anyone he sees as a key Atheist figure or anyone thusly linked, and posting rambling often offensive sometimes threatening blog comments on our blog sites, for several years now. He is a Nostradamus cultist. A while back he was arrested and put by Montreal authorities into psychiatric care, and later released under certain conditions including that he not bother people on line any more. More recently he started up again with his old habits, the community of those he harasses complained again to the authorities, and he was, as you can see, re-apprehended.

I've decided to update this blog entry (20 Dec 2011) because it occurs to me that certain things could be misinterpreted, in no small part because of the common language that separates us across various national borders, and differences in the way debate and concepts of free speech operate in…

Uh, there is a Team Canada, isn't there? Many of you may have noticed that Dennis Markuze has been going on a commenting spree lately. He's leaving a few hundred threatening messages a day, which I clean up as I find them, and has also said he is emailing these threats to every individual member of…

What does sexism and harassment feel like to you?

I’m a guy who “gets” nasty threats from haters. I receive anti-atheist threats and icky comments, I receive a LOT of nasty stuff from climate science denialists (and that often comes along with bogus threats of law suits), I receive nasty emails and tweets from the sexist and racist SlymePitters…

I hope they keep him in jail for a long time. That creep does not deserve to be free.

So what's the consequence of this breach of probation? Will he be back under psychiatric care?

Marnie, yes, as I understand it.

I'm sort of torn about my feelings on all this. On the one hand, I'm fully in support of providing help for people who need it and, while I'm not going to get into the diagnosing game, it would appear that the courts, at least, deemed him in need of mental health care. But I also feel like his obvious attempts to hide his identity suggest that he is well aware that what he's doing is wrong and that there could be consequences and if you are being an unmitigated dick, knowingly, intentionally, and for malicious reasons, there should be consequences for it and it doesn't sound like that was achieved the first time around because he's right back at it.

@NEBob: IANACanadianL, but given the charge and specification I think it's unlikely Markuze will be released on bail. It should be easy for the prosecutor to argue that he's a danger to others.

I think too often the analysis of criminals with psychiatric conditions or personality disorders allows us to forget that people can be both mad _and_ bad.

@EricLund: Unfortunately, against the wishes of the arresting offer, Markuze WAS released on Monday by the court.

That and other details are in my blog post detailing what went on behind the scenes before Markuze was arrested.

You can see it here:
http://skeptools.wordpress.com/2012/11/20/operation-archangel-david-mab…

Dennis is back at it already, he's been posting @ AtBC the last two days...