Is Greenland's Ice Melting Way Fast, and Why? You can help.

You know about Albedo. No not Libido, Albedo. Sunlight is to varying degrees reflected off the surface of the earth more or less back into space. That is Albedo. The vast regions of snow and ice covered glacial surfaces in the northern and southern Polar regions contributes to a good amount of the Earth's Albedo. In the north, the biggest chunk of that is the ice-covered subcontinent of Greenland.

Over the last several years, Greenland's Albedo has diminished. This was in part predicted by scientists who expected that warmer conditions would change the nature of ice and snow crystals on the glacier's surface, thus darkening it and causing less reflection. But the rate of Albedo reduction in Greenland has been much more rapid than expected. 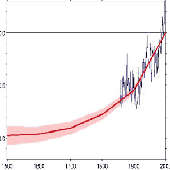 There is a research project afoot that will look into this, but that is having a hard time getting funded, probably for bad reasons. The project is now asking for crowdsourcing funds. Please have a look at the following video, learn some interesting stuff, get scared, then click the link below the video to donate money to the project, then feel better. But not too much better.

Deglaciation is a natural process of our planet. There is an ebb and flow to everything. The past reminds us of the consequences, which we cannot change. Neandertals and Denisovan Hominids existed side by side. Denisovan who?
Deglaciation in the altai mountains almost wiped them out completely. They weren't intelligent enough to relocate.

Robert, that's a bunch of malarkey.

What. Is the big deal Greg ? Grapes were grown in Greenland 7000BCE there are cycles and we progress through the Holocene interglacial these things are all part of a cycles with variations

Graeme, that's a nice combination of cherry picked data, incorrect information, and an inappropriate model for climate change you've got there.

All other things being equal the Earth ought to be cooling very slowly.

Instead the Earth is now warming at a rate which is almost without precedent in the geological record. And, insofar as there is precedent, it is not good precedent.

So all this nonsense about "cycles and variations" or "ebb and flow" can be dispensed with, because it just ain't so.