Valentine’s Day is coming up, so it is time to think about kissing. Pursuant to this, Sheril Kirshenbaum, author of “The Science of Kissing,” has made the Kindle version of her excellent book available at a discounted price through February 18th. The book is here: The Science of Kissing: What Our Lips Are Telling Us

. (Sheril is also the co-author of Unscientific America: How Scientific Illiteracy Threatens our Future 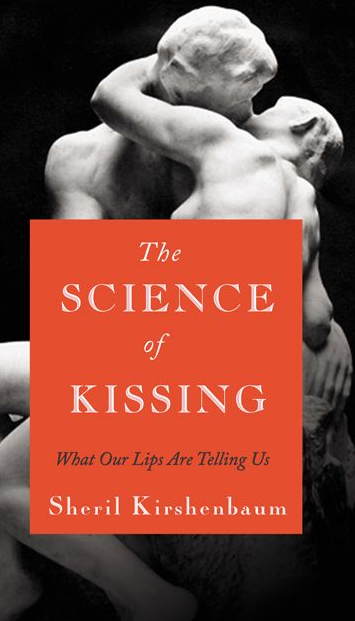 The Science of Kissing

Also pursuant to Valentine’s Day, I thought it appropriate to repost my original review of Sheril’s book which comes with a story about a kiss:

I went out with a friend. We were both between relationships, and we both knew somehow that this was a date though it was never called a date. And we had a perfectly good time: Good food, good conversation, good drinks. She drove.

When it came time to go home, she drove me to the urban neighborhood I lived in and parked on the street near my house. As we were saying our good-byes, she enigmatically unhooked her seat belt. I wondered why. Then, I discovered that she wanted the freedom of movement to lean across the console and give me a kiss. It was a good kiss. It was actually a series of good kisses, and it went on for a while.

And suddenly, there was a loud rapping on the window of the car. We stopped kissing and that’s when we noticed that we had steamed up the windows a bit. So I cracked the window on which the rapping had occurred and there was a policeman staring in with his flashlight.

Now, you have to understand, this is two adults in a car in the city, not teenagers at some remote lover’s lookout in the country side on prom night; this was in a neighborhood where the police never wander around on foot, and certainly never bother the local residents in this manner. Yet, there was the steamy window, the uniformed police officer, and the bright flashlight.

“What can I do for you, officer” I said, thinking, “what is this Joker doing?”

“Ah, sorry to bother you,” realizing he was shining the flashlight in my eyes, diverting it, “I was wondering if you saw anyone coming by here. We’re in pursuit of a burglar.”

I listened for a moment.

It is said that you never forget your first kiss. I think I might have. But THAT kiss, I will never forget not only because it was a very warm expression of closeness with someone I love and all that stuff, but because of the over the top comic relief associated with it. I mean really: A cop, a flashlight, a rap on the window???? GMAB!

Anyway, that is one of my favorite personal kiss stories. The Science of Kissing: What Our Lips Are Telling Us

, a new book by Sheril Kirshenbaum has a bunch more about kissing, and is a must read for anyone who wants to try out kissing (you may like it) and keep it scientific.

You would think that kissing is pretty basic. A few different animals seem to do it, and we’ve all seen the pictures of chimps kissing. So, humans have always kissed, and it’s a basic feature of our species and we all do it and it’s kind of wet and messy and what else can you really say about it? But if that is what you are thinking, then you need to do two things: a) get more curious and b) remove your Occidento-normative Western Unthinking Cap and learn yourself some perspective.

Kissing is almost a human universal, but not quite. Not all cultures do this. The history of kissing is complex and interesting, to the extent that we know about it. Kissing may or may not be a signal for quality or ability in relation to other activities such as sex. Men and women seem to “use” kissing for different purposes. Science has something to say about the efficacy of lip-enhancing behaviors such as gloss and colorizing. And did you know that men and women do not necessarily like the same kind of kissing, at least in some contexts?

Sheril’s book is a fun read and there is no way you will not find it informative. Gender issues and sexuality is an interest of mine (as an evolutionary biologist) so I know a lot of this stuff, but I learned a great deal reading her book. And, it made me think.

To me, the most interesting take-home message from Sheril’s book is that kissing is both a fundamental, primordial form of communication involving the deepest limbic and visceral functions and the most basic social negotiations foundational to human existence, and something that any one group of human can simply do entirely without. Sheril documents the heterogeneous nature of kissing historically (and by inference prehistorically) and ethnographically, while at the same time demonstrating the nature and mechanics of kissing as an ethological factor in the kind of social space where one might also find cringing or punching or swearing or yelling or fearing or other visceral activities.

At first, this seems highly enigmatic, but need not be so. What is needed is to draw kissing down to some of it’s more basic components. What is kissing made up of that could be done some other way that does not add up to actual kissing?

Bodily closeness, face-to-face closeness, exchange of scent and sebaceous substances and possibly more bodily fluids, and so on … some subset of what any Middle Schooler would call “Totally eeww factor” … is probably found in every human culture, much like fried bread is found in every culture.1 There is this list of things humans may do to/with each other in the process of negotiating (or at least playing around with) sex, marriage, or some other reproductive activity or social contract, and one way to piece this all together is with the Inuit muzzle rub, or some other activity, or a kiss.

It is also interesting that the kiss has spread over recent time. I wonder if it was very common at times in the past, fell out of favor, and returned, over and over. I am not necessarily being ridiculous when I imagine that the various behavioral accouterments of closeness would be combined, recombined, spread, forgotten, preferred, prohibited, in a kind of Dawkinsonian “River Out of Eden: A Darwinian View of Life (Science Masters Series)

” of memes, kind of like baby names, with the kiss being at times the species-dominant behavior except here and there, but at other times, rare and exotic found only on some island or in some isolated mountainous region in Portugal. A Ripley's Special Edition 2016 (Ripley's Believe It Or Not Special Edition)

entry from 7,600 BC: “Married residents of a remote valley on the Iberian Peninsula greet by clasping each ether’s lips with their own lips! Believe It Or Not!!!”

I recommend the book. I suggest you consider it as a gift for your mate on his or her birthday. Or, to your mate as a Valentine’s Day gift! Since Amanda was born on Valentine’s day, I get to do both at the same time!

Enjoyable read! I feel rather warm and fuzzy now. Good way to start the day.