Ebola and "the French Disease"

Jim Moore and I were both students in the PhD Program in Anthropology at Harvard a few years ago. He graduated about the time I entered the program. To give a rough historical touchstone, I remember the day he needed to get his thesis off to the Registrar, and there was a delay because it was taking longer than expected to deburst the pages fresh out of the printer. Anyway, Jim is Professor of Anthropology at UC San Diego, and has done a great deal of work with Old World Primates, the evolution of social systems, and related topics. A while back Jim wrote an important piece for American Scientist which was a summary of his intensive research on the complex origin of HIV in Africa. Jim and I got to talking the other day about that topic in relation to the current West African Ebola outbreak (though this really relates to Ebola across the region in West and Central Africa). I invited Jim to write a guest blog post on the topic, he did, and that post is below. The graphic above accompanies the post and is used with permission from Jim's earlier American Scientist article.

Ebola and “the French Disease”

The origin of AIDS

By comparing the degree of variation among samples of HIV 1 group M (the virus responsible for the pandemic), we can estimate how long it has been since the original variant existed; that gives us a time for the most recent common ancestor (TMRCA) of between 1908 and 1920 (depending on which recent analysis you like). For group O (which has not spread far), the TMRCA is a few years later, about 1920 to 1926. Put in the error estimates for these dates, and the range is about 1903 to 1948. Group N, with fewer than 20 patients known, is thought to have originated between 1948 - 1977 and the range for group P (2 patients) spans more than a century.

By comparing HIV 1 with different strains of SIVcpz and SIVgor (simian immunodeficiency virus of chimpanzees and gorillas), we find the closest match for group M comes from chimpanzee groups in SE Cameroon, just over the border from RP Congo (“Congo Brazzaville” to distinguish it from the Democratic Republic of Congo [DRC], ex-Zaire, ex-Belgian Congo). Group O appears to be derived from SIVgor, most likely someplace in southwest Cameroon. That discovery involved collecting thousands of samples of ape feces from all over Africa and screening them for SIV, a prodigious project overseen by Beatrice Hahn. And a recent paper in Science makes a good case that for HIV 1 group M, after initially becoming established in someone in northern RP Congo/SE Cameroon, the virus traveled down the Sangha River to Kinshasa (personally, I don’t think they can meaningfully separate Kinshasa and Brazzaville at this stage) around 1920, where it was maintained at a low prevalence until about 1960 when the pandemic began.

Do the same exercises for HIV 2, and the two epidemic groups (A & B) most likely originated around 1940 - 1945 (1924 to 1959) from SIVsm (sooty mangabey) someplace in or near Ivory Coast. Like HIV1 group M, the virus seems to have travelled from its point of origin (sooty mangabeys in the Tai Forest, Ivory Coast, have the closest SIV matches to both groups) to where they caught on and eventually became pandemic (Guinea-Bissau, where the war of independence seems to have facilitated the process).

Now here’s the thing: people in both areas have eaten primates, and so been exposed to SIVs, for millennia. And as a sexually transmitted disease, well, sex has been going on for even longer. Massively increased promiscuity in the context of commercial sex workers in rapidly urbanizing and poor populations? That’s more a twentieth century thing, starting early in the century but really taking off after World War Two and ongoing today. Furthermore, in around 1960 disposable plastic syringes became widely available and, in poor areas, were often reused and/or easily available to traditional healers and charlatans, making unsterile injections more common. And of course travel by trains, cars, and planes has increased through the 20th century (with an important caveat that in parts of Africa such as the DRC, many railroads and roads weren’t maintained after independence and fell apart post–1960s).

So exposure to SIV has been going on for millennia, and “the usual suspects” in terms of STD risk factors became important early in the 20th century but increased dramatically (and have remained high) since the late 1950s, and despite that the only strains of HIV that have “caught on” all date from around 1920 - 1945. What is missing?

Those places, those times: French Equatorial Africa and French West Africa. There are SIV-carrying primates in many parts of Africa, under various colonial powers at various times, but all four zoonotic HIV strains happened under the French. Bad luck? 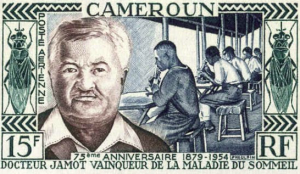 It is impossible to be sure, but I have argued that for HIV 1 the catalyst was the combination of two things. First comes the unbelievably brutal treatment of Africans in both French Equatorial Africa (FEA) and the Belgian Congo, resulting (among other things) in labor camps where men were overworked, malnourished, and provided with women as a matter of policy to keep the workers – well, “happy” is probably not the best word, but you get the idea. The second element was the effort to cure smallpox and sleeping sickness through aggressive diagnosis/treatment/inoculation campaigns using traveling “mobile clinics” that had inadequate equipment for the scale of the job they were doing. For example, one sleeping sickness expedition in 1916 into what is now Central African Republic diagnosed/treated more than 89,000 people with just 6 syringes (the number of needles isn’t recorded). Over more than a decade, these mobile clinics, pioneered by Dr. Eugene Jamot, reached - and injected - millions of people. The importance of sterile equipment was well understood, but the logistics (I speculate) would have been prohibitive. The campaigns represent a major humanitarian effort that saved many lives, but the combination of widespread use of unsterile needles and stress-induced immunosuppression could not have been better designed for adapting a virus to new hosts.

I do not know the relevant history of French West Africa (FWA) so am cautious about saying the same thing happened there with HIV 2. However, it is worth noting that in 1931 Jamot was held responsible for the accidental blinding of hundreds of people being treated by one of his subordinates (sleeping sickness was treated with an arsenic derivative, and the subordinate apparently tried out a higher dosage, with disastrous results). With a cloud over his reputation, Jamot shifted from FEA to - Ouagadougou, in FWA. There he took charge of the sleeping sickness campaign, again with mobile clinics and again treating thousands of people under difficult conditions over several years before his health deteriorated.

Why belabor the French?

Eugene Jamot was a genuine hero, and while colonial support for the mobile clinics wasn’t all humanitarian (there were concerns about the loss of [forced] labor if too many died), I am sure the people involved were doing their best to help other people in need. It might seem mean-spirited to point the finger of AIDS at them.

Well, here is one reason. A recent article in Science by Faria et al. examined the history of HIV 1 group M, concluding that the virus arrived in Kinshasa in about 1920 where it barely kept up with population growth until about 1960, when it began rapidly spreading in the pandemic we see today. It is valuable and interesting work. The actual origin of the virus is not their focus, but they summarize it thusly:

After localized transmission, presumably resulting from the hunting of primates, the virus probably traveled via ferry along the Sangha River system to Kinshasa. During the period of German colonization of Cameroon (1884 - 1916), fluvial connections between southern Cameroon and Kinshasa were frequent due to the exploitation of rubber and ivory. (page 58)

German colonization? Well, yes; the Germans were in Cameroon up until 1916 (when French/Belgian forces that had traveled up the Sangha in 1914 finally drove them out; Jamot was a medical officer with the expeditionary force). But traffic on the Sangha River didn’t end in 1916, and most of it was between Brazzaville/Kinshasa and the French towns of Ouesso, Nola, and Carnot anyhow. Why specify the “period of German colonization”?? I do not KNOW, but I note that (1) there is no other mention of any colonial power in the Faria et al. article, and (2) of the 14 authors, 6 are affiliated with institutions in Belgium or France (the rest, UK and USA). It looks to me like there may have been a bit of whitewashing going on there, and using a scientific article to blow historical smoke in our eyes gets my dander up.

Here is a better reason for acknowledging the likelihood that AIDS got its start as an unanticipated consequence of underfunded, understaffed humanitarian efforts to deal with infectious diseases in equatorial/west Africa: history can repeat itself. To ignore ebola in West Africa is not an option, and half-measures have whole risks.

The early spread and epidemic ignition of HIV–1 in human populations (2014).

Some other material of mine on HIV origins

Further note: Readers of this blog will avoid confusion by noting that this Jim Moore is not the Aquatic Ape Jim Moore. Same name, different guy.

Fantastic read - wondering what the connection was kept me reading to the end.

Many thanks, Debashish & Doug.!
A friend, reading this, asked me exactly what risks I meant - new diseases (cf. Nathan Wolfe's book, The Viral Storm)? Part of me wanted to dodge it - the point about unanticipated consequences is not anticipating them - but vague "beware, the sky might fall" is cheap.
Ebola has not previously spent much time in humans, so has had little chance to adapt. Obviously the longer the epidemic goes on, the greater the chance the virus will adapt to humans. For example: ebola is not contagious until symptoms manifest. Well, logically speaking isolating patients as soon as symptoms show up creates a strong selective pressure on the virus to become contagious BEFORE symptoms are visible (like HIV).
So that's one possibility.

Humans could bring Ebola to a new host.

Ebola could become more benign, and thus, worse, if it manages to circulate in humans and human commensals (rats, etc) ... i.e., it could become a version of the plague, more or less.