I have one Car Talk story and this is as good a time as any to tell it. It might be the only link between Sean Connery and The Tappet Brothers.

Look at the picture above. It is Harvard Square. Remember the movie Just Cause, starring Sean Connery and some other people? One of the first scenes in the movie has the mother of a young black man wrongfully accused of murder taking the bus to the Harvard Law School. Her Greyhound Bus, at one point, wends its way through Harvard Square. Mother eventually finds the famous Harvard Law Professor, Sean Connery, and convinces him to go to the Deep South to represent her son. It is a good movie, actually.

The scene with the bus was filmed in the middle of the night, way after midnight, but using a lot of strong lights and some other camera tricks, they made it look like daytime. That is standard procedure, apparently, when you need to film a day time scene at one of the busiest intersections in the country. They only let you close the street down during the wee hours, and for a short moment. Since my job had me out on the streets at 4 AM more than once, I would occasionally run into movie crews (a lot of movies are filmed at or near Harvard, though seemingly fewer these days).

OK, so this story isn't a great story; more like one of those things you run over in your mind after it happened, telling yourself "I should have said this" or "I should have done that."

I was in The Square (see picture above) one day and the director of Just Cause was there with a few crew members scoping out the shot they would try to pull off that night, the one with the bus. They had a huge boom thingie on a truck with a camera on it, and it was swaying around back and forth way overhead getting various angles, and the director was running around looking through a little round thing which directors look through. Apparently.

For some time I was standing right next to him, and I could see that the camera was very very close to showing, in its sweep across the square, this: 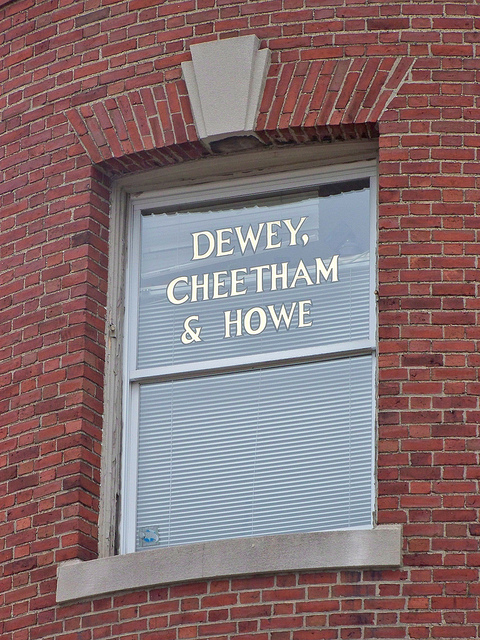 That's the location, in My Fair City, Ma, where Car Talk originated, labeled as the law offices of ... well, you get the picture. Literally. There's the picture, right there.

I should have told the guy. I should have said, "Hey, Mr Director you ever listen to Car Talk, you know, those guyz on the radio? That's the place right there, the law offices of Dewey Cheatem and Howe. You just angle that camera lens a tenth of a degree to the left, and you'll have it in your shot. It will become at least a line in the Internet Movie Database as Interesting Trivia. Once they invent the Internet Movie Database, and all."

But I didn't. I didn't say that. I just let the guy do his job. The rest, as they say, is history. In this case, history that never actually happened.

Maybe he has a Ph.D. in philosophy, and that's why he's driving a bus?

Mr Ron Heather, Unprofessional Bus Driver and Pompous Faith-Head, has decided to become briefly famous for his stupidity by refusing to do his job and drive a bus with advertising on it. Mr Heather told BBC Radio Solent: "I was just about to board and there it was staring me in the face, my first…

The big Monty Hall book has finally been sent off to OUP, so it's time to get back to blogging. We begin with lighter fare. I caught the midnight screening of the new Indiana Jones movie last night. Did it live up to its billing? No. It was terrible. A true disaster. Cringe-worthy. Hard…

"Daddy, you know what? I bet you didn't know, but my school bus can fly." "Really? I didn't know that." "Yeah, there's a button up at the front with a picture of a flying bus, and if you press the button, the bus flies." "That's amazing." "Yeah, and guess what? The other day, the bus driver called…

Growing Up, and The Process of Discovery

This is not a time to be profound. This is a time to rehydrate and make some more coffee. And search around for stuff that fell out of pockets. I normally do not blog very many day to day details of my private life, especially regarding other people, because it is obnoxious to know someone who…

I saw this earlier today, and still got a chuckle when I read this in the announcement:

It is worth noting that they ask that people donate to an Alzheimer's fund or to their local NPR station in memory of Tom.

So many enjoyable hours listening to click and clack over the years. Sad.

Thanks for the picture. I'd never seen the “square” before and wondered about it every show.

Once upon a time there were farm roads criss crossing the country side. They merged here and there at key points, or just merged here and there randomly, and those crossings, where usually more than two roads met, became nodes. Eventually they became busy intersections in cities, and got named. You can't swing a dead cat in the GBA without running int a a square. Not a single one is square.

The way you give directions is by squares. "Back bay? Go down to Porter, then Harvard, turn left but cut over to Dante, that will bring you to Inman then to through to Union, then straight drive for five miles (one hour during the rush) and turn left."

OK, go down this road and when you get to Porter Square, with the giant whales and the food market, ask for directions to Harvard Square.

As someone who lives a 10 min walk from the Square and visits it a couple of times a week, I have happily glanced at that sign several times and will wistfully do so in the future. Nice story.

The way you give directions is by squares. “Back bay? Go down to Porter, then Harvard, turn left but cut over to Dante, that will bring you to Inman then to through to Union, then straight drive for five miles (one hour during the rush) and turn left.”

I'm glad you weren't a cab driver: depending what part of Back Bay you're trying to get to, it's about 2.5 miles from Harvard Square. Bear right at the square, turn left on Mt. Auburn which takes you to Central, continue straight across the Harvard Bridge[1], turn left on Comm. Ave.[2] or Boylston St. That way, you stay on a numbered state route (Route 2A, though this part is maintained by the City of Cambridge). The complication arises because part of Mass. Ave.[3] between Harvard and Central is one-way-the-wrong-way; if you're a pedestrian, just follow Mass. Ave. (which, in the photo, is the street entering at right and exiting at the top). Or take the Red Line from Porter, change at either Park St. (Green Line westbound) or Downtown Crossing (Orange Line toward Forest Hills) to the station nearest your destination.

[1]Which of course is located near the MIT campus.

[2]Commonwealth Avenue, a boulevard running from the Public Garden through Allston/Brighton into Newton.

[3]Massachusetts Avenue, which runs from Boston through Cambridge and Arlington into Lexington.

I, like most dedicated gearheads with a technical fetish (mine is for two-wheeled vehicles than can kill you if you look and them the wrong way) lived for Cartalk.

I was deeply saddened by the news. I never really knew one of them from the other-they were almost a Gestalt being (ala Red Dwarf episode "Legion") and never thought one would be complete without the other.

Initial reports seem to indicate Tom died from complications to Alzheimer's. I can't help but think of others suffering from this, including another personal hero-Sir Terry Pratchett.