Global Warming Is Heating Up

Humans have been releasing greenhouse gas pollution into the atmosphere for a long time now, and this has heated up the surface of the planet. This, in turn, has caused a number of alarming changes in weather. Several current weather events exemplify the effects of climate change.

South Asia recently experienced a number of killer heatwaves, and that is still going on in the region. More recently, we've seen long standing record highs being broken in the American West. The Capital Climate group recently tweeted this list of records: 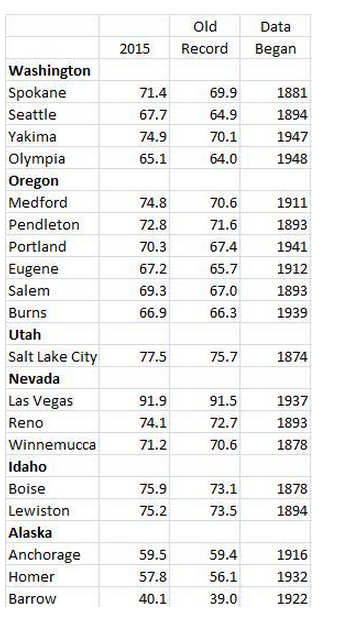 Hot Whopper puts this in some context and adds some other sources, here.

The Weather Channel has this map of current western heat alerts:

More on the western heat wave here at Weather Underground.

The extreme heat has even surged north into Canada. Cranbrook, in far southeast British Columbia at an elevation of about 3,000 feet, set a new all-time record high of 98 degrees (36.8 degrees Celsius) Sunday, according to The Weather Network.

Great Britain is sweltering "on the hottest July day on record," according to Jessica Elgot at the Guardian.

As temperatures reached 36.7 °C at Heathrow, commuters were facing difficult journeys on the London Underground. One platform at Kings Cross underground station recorded 33 °C however the temperature on tubes is believed to be even hotter.

Charlotte Dalen, originally from Norway but now living in London, said: “It was pretty warm and very smelly. People were waving pamphlets to keep cool but it didn’t look like it was helping.”

The map at the top of the post of current heat anomaly estimates across the globe is from Climate Reanalyser.

Raquel is a Pacific Tropical Cyclone (hurricane) which is the earliest to form in the region (The "Queensland Zone" as tracked by the Australian meteorologists) in recorded history. From the Bulletin:

TROPICAL Cyclone Raquel has formed in the south-west Pacific near the Solomon Islands, triggering the earliest cyclone warning on record issued for the Queensland zone.

"Certainly it's a unique scenario," Jess Carey, a spokesman from the bureau's Queensland office, said. "Since we've been tracking cyclones with satellite-based technology, we haven't seen one in July."

The storm became a category 1 cyclone early on Wednesday morning and had a central pressure of 999 hPa about 410 km north of the Solomon Islands' capital of Honiara as of just before 5am, AEST, the Bureau of Meteorology said. It is forecast to strengthen to a category 2 system on Thursday.

"The cyclone is moving southwest at about 16 km per hour and should gradually intensify over the next 24 hours as it approaches the Solomon Islands," the bureau said in a statement. "The system will remain very far offshore and does not pose a threat to the Queensland coast."

The official cyclone season runs from November 1-April 30. Any cyclone after May or before October is considered unusual.

Over the last several days and continuing, there have been extensive and unprecedented fires in the west as well. Drought in California has increased fire danger, and now things are starting to burn. This year the fires started earlier, with one of the largest fires having burned during a normally low-fire month, February. Also, fires are burning where they are normally rare. According to Will Greenberg at the Washington Post..

Cal Fire has already responded to 1,000 more incidents this year than they see on average annually. The agency reached that same landmark last year as well — but in September.

By the end of June, officials had fought nearly 3,200 fires.

In total, Cal Fire and the U.S. Forest Service have responded to fires stretching over 65,755 acres so far this year.

And this is just the beginning for California’s 2015 wildfire season.

Meanwhile, in Washington, where it has been dry and hot, hundreds have been forced to flee from some amazing wildfires. From the Guardian:

The wildfires hit parts of central and eastern Washington state over the weekend as the state is struggling with a severe drought. Mountain snowpack is at extremely low levels, and about one-fifth of the state’s rivers and streams are at record low levels.

Eastern Washington has been experiencing temperatures into the 100s, and last week Washington governor Jay Inslee issued an emergency proclamation that allows state resources to quickly be brought in to respond to wildfires.

The number of Alaska's active wildfires is literally off the charts, according to a map recently released by the state's Division of Forestry.

Over 700 fires have burned so far this summer, the most in the state's history, and that number is only expected to get bigger as the state is experiencing higher temperatures, lower humidity and more lightning storms than usual, said Kale Casey, a public information officer for the Alaska Interagency Coordination Center, which serves as a focal point for state agencies involved in wildland fire management and suppression.

And, of course, from the US Drought Monitor ...

To me, the data seems to show a greater increase in temperature where dark surfaces are increased. Why couldn't we have zoning restrictions non-reflective ness . There are Zoning laws now for Energy Conservation. And how about requiring Ashphalt roadways to have a top coat of fine whit rock and rolled in? These seem to me to be inexpensive way to help.

The temperatures for WA and OR are not labeled as F or C, as average for month, or YTD. The actual temperatures here in OR are in the 90s F. The values in the 70s as record high temperatures does not make any sense.

James, I have no idea how you can say that this is related to dark surfaces given the information provided here.

Having said that, it is absolutely true that locally, esp. in some areas, you can reduce ambient heat and thus save energy use and money on air conditioners by making surfaces brighter. Someone once told me that if they painted all the roofs in a major western city (san fran IIRC) white or silver the cost of air conditioning during the summer would drop by something like 10%

But this is not about that.

Richard, they are obviously F. I think they must be daily highs, but you can click through the link and ask them directly on Twitter. They can't be C.

"They can’t be C." (Yet) The Koch Brothers are working to fix that for us.

So, do the Albedo Police wear white uniforms? I guess that reflects on their shiny reputation of only hiring the brightest...

Brightening and higher reflectivity can indeed help local temperatures remain lower, as this minimizes both Infrared radiation off dark "black body" surfaces (heat) and thermal content of the mass under those surfaces available for conduction to adjacent air and objects. Vegetation, light concrete, and white or highly reflective surfaces all help to send that white light radiation right back to space, rather than absorption and conversion to heat the way asphalt and darker surfaces do. UC Berkeley, among others, has a great program to develop alternative coatings and materials to help cool neighborhoods and minimize the need for air conditioning, which in turn conserves a LOT of energy and thus minimizes local emissions of CO2.

Having said that, Greg is correct - this localized heating is not a significant factor in the data that has been collected, and its minimal effects can also be accounted for in adjustments. The map above shows a tremendous amount of heat concentration in areas where development tis light or nonexistent - much of Western North America, Siberia, and Central Asia have large expanse of open space where heating differential cannot possibly be accounted for by localized development.

Then there's the expanse of interior Alaska - simply impossible to ascribe THAT massive heating to localized development.

In case there was any confusion, the June temperatures listed were record monthly averages in degrees F.
These records are particularly significant because:
- They are official NWS stations
- Long histories, many a century+
- Large area covered
- Old records exceeded by wide margins, often > 1 degree

Well, there you go then!

Lots of fires in Canada as well.

True to form, Watts & Co are trying to shrug off the triple digit heat in the Pacific Northwest
http://vvattsupwiththat.blogspot.com/2015/07/if-you-dont-like-weather-in-seattle.html

So England has a decent summer, for once? Is it asking too much?