Who Will Win The New York Democratic Primary?

As you know, I've been applying a model to predict the outcome of each of the Democratic Primary contests, and have done pretty well at predicting results.

All of the future contests are primaries, not caucuses. It turns out that the two modes have very different patterns. Many have suggested that this has to do with how the process works, and somehow caucuses, or open contests, favor Sanders, who has won several. However, it also turns out that caucusing is a northern thing (and Sanders does somewhat better in the north, or more accurately perhaps, rarely wins in the south). Caucusing is also a white thing, apparently. Caucuses happen in non-southern mostly white states, and these are states that Sanders can (but does not always) win.

Since the remainder of the contests are primaries, I used my simple ethnic-based model, which predicts the outcome of the various contests based on the estimated percentage of African American voters. I used only data from previous primaries to develop a simple linear model. This model applied to all of the future contests, starting with New York, tells us that Clinton will win in New York.

How many delegates does each candidate have so far? Clinton has approximately 1310 and Sanders approximately 1094. (This is approximate because in some states it is actually a little hard to count because of the nature of the system.)

Here is a table showing all of my projections from here on out. I'll probably redo the model a few more times, especially if anything unexpected happens, so stay tuned. 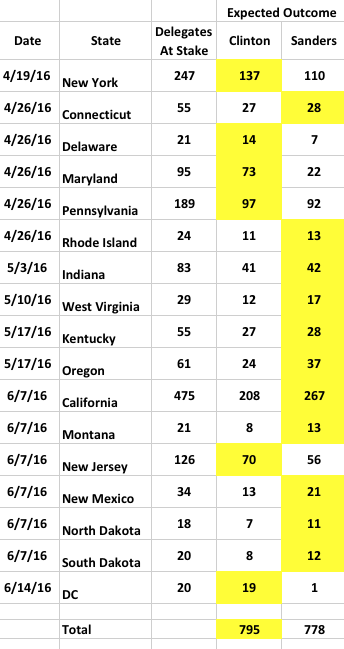