How Science Can Resist Trump

The March for Science, in April, may be a June to September romance between academia and and political activists, but prior experience in Canada suggests we are in it for the cold hard winter.

A conservative government in the land of the maple leaf took wide ranging action to shut down and control science and science communication. The populace became outraged, and the politicians were put on ice. The fight continues, and it looks like the position of science in Canada will end up more secure than it ever was before. Don't mess with Canadian scientists and the citizens that respect them.

Meanwhile, in the United States we have good news and bad news. The bad news is that the Republican Party has taken over the country, led by an oligarch by the name of Trump, and science is under more severe threat than ever before. The good news is that the United States has Canada to serve as an example, and, as Katie Gibbs notes, the US also has a large number of powerful institutions already in place to fight the new repressive regime.

So, now it is a race. How fast can the Republicans remove voting protection and continue their ongoing gerrymandering, so a small right wing majority can continue to rule? How fast can Progressives shift the Congress so Trump can be stopped and the Republicans, ultimately, pushed out of government? (And, make no mistake: we can no longer have a two party system where one of the parties is Republican. They are traitors and we must fully marginalize them.) 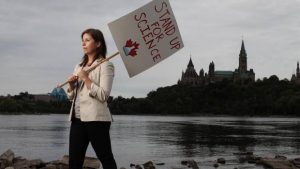 I assume that by now you know that I have a podcast, with Mike Haubrich, called "Ikonokast." We interviewed the aforementioned Katie Gibbs, Executive Director of Evidence for Democracy, which took part in organizing the Death of Evidence March of July 2012. Dr. Gibbs gave us the lowdown on what happened in Canada, and we discussed what we might to in the United States to Resist Trump. Please go listen to our podcast, which is available here, on iTunes, and Google Play.

Apparently the same tactics employed in Australia also resulted in rollbacks and politicians put on ice... By a populace that also respects science.

Greg, action aimed at the protection of planet earth is of the utmost importance. We support the rally for the consolidation of the freedom of science to get, hold and protect a heathy planet. Laren NH, Saturday 11 February 2017, 18.12 PM DT

You might want to make an edit: The populous became outraged, and the politicians were put on ice. Populous should be populace. :-)

I wouldn't look at the Canadian example too fondly Greg. It took us 10 years and 3 elections to get rid of the science haters. We still have a large portion of our population who believe what they say (and don't believe we should be concerned about global warming). Our political system allows the direction of government to be changed more quickly since a majority government has little that can slow it down, but it can also go back the other way just as easily. Also, while there was some anger towards the silencing and cutting of public science the more general reaction was a giant "meh." The larger reason they got kicked out was the typical "time for a change" mentality

One thing that is worth noting is that all these pro-science protests don't worry conservative politicians at all. None of those people would ever vote for them in the first place, and they spin it to their base as proof that they are putting those uppity elites in their places.

What Steve said. I think that, once impacts were being seen and covered in the press, Canadians were more upset over the loss of the long form census than they were the silencing of scientists.

Doug Alder, could you explain about the census? I think Americans would be happy to be rid of the long form census, although only a small percentage ever receive it.

In the states the dislike of the census is due to the constant rant of the tin foil hat loons about all the evil things the government does with data - there is no fact based objection.

But there are many objections based on "alternative facts"...

Alternative facts indeed.
Communication seems to be drifting away from the core function of accurately transmitting data from person to person. Instead it is morphing into a criminal behavior wherein incorrect information is purposefully used by those intent on controlling and even hurting other humans. The concept of “political correctness” became a war cry of those who felt that their god given right to hurt other beings was being infringed upon. Now, today, they of the free spinning wingnut fringe seem to be attacking those who value ANY sort of correctness. Correct reporting of clinical vaccine results, climate trends, or political misbehavior is being criticized by all sorts of modern dimwitted sadists and barbarians. How did we arrive at this rather unfortunate pass? It seems that the blood thirsty quarter of the population who enjoy giving pain have ascended to the control room. Steve Bannon, Stephen Miller, Myron Ebell, Trump, Priebus, Ryan, McConnell, Lamar Smith, KA Conway, S. Spicer......Coulter, M.Malkin.. WTF.

C.M Kornbluth seems to have visited our century in the 1950's. Ever read his story "Shark Ship"? In a dystopian future, there is a malignant growth of violence and sadism . I think there was even a leader with a name similar to "Murdoch" who stoked the fires psychopathy among the population.

Stoked them to run for office and get elected??

Look what I found!

Merdeka became a media magnate of violence and cruelty. "Merdeka leaned back. Two billion circulation this week.."
All too chillingly familiar. He sounds like somebody named Rupert that we know.

I will have to take the time and go back and re-read that little treasure.

Or, you can just turn on the U.S. national news and watch it develop in real-time....

SteveP - thanks for the link. Very interesting story.