As the Republican led US Senate has voted to confirm (or deny) the party leader's cabinet picks, they've done a poor job, approving, for example, people who have acted in direct opposition to the areas of government they are expected to serve, or in some cases, being abjectly incompetent. The Republicans in the Senate were not vetting the nominees. Some of the Democrats were, but even there, we saw failures of conscious.

The Senators need to be reminded that the critical choices made by the Trump administration tend to be poor ones. Look, for example, at the first NSA choice. General Flynn was caught engaged in acts that were at least unethical and annoying, if not downright illegal and, worst case scenario, treasonous. Why would we expect the Trump administration to had better choices to the Senate for their approval? 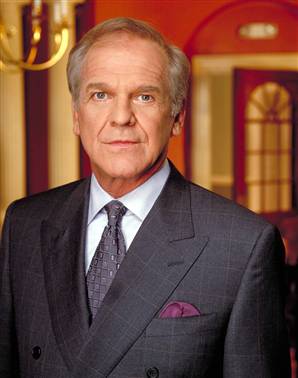 "This would have been really bad." Former fictional Secretary of Lbor, Leo McGarry.

I'm pretty sure the Republicans in Congress have no clue what "advice and consent" means or what the Constitution says, or history says, about this.

The total number of Senators voting for each of Republican President Trump's nominees is less than usual, with many, sometimes most, Democrats voting against the various and often very unqualified nominees. The Democrats who did vote for these individuals will be held to account over coming years, especially those who voted for Tillerson, and others who may ultimately be linked to currently developing scandals.

But now we have an interesting development. One of the most awful choices ever put forth for a high cabinet post ever, in any government by any president -- equal to in level of insult and injury to the Betsy DeVos nomination which Congress narrowly approved -- was Andrew Puzder as labor secretary.

The public outcry about putting this particular fox in charge of that particular hen house should not have exceeded the outcry against Tillerson or the others, but the general public and, certainly, Trump's Republican Congress, appear not to understand too much about what happens in government and why it is important. But an attack by Oprah, armed with withering truth, seems to have mattered. Outrage over Puzder's misconduct in business and personal life, some of which could be an embarrassment even to the Trump administration and to Republicans generally, was too much.

Moments ago, Puzder made a move we wish so heartily that Republican Donald Trump's father had done years ago: he withdrew just in the nick of time.

By the way, have you read Saving Capitalism: For the Many, Not the Few

America was once celebrated for and defined by its large and prosperous middle class. Now, this middle class is shrinking, a new oligarchy is rising, and the country faces its greatest wealth disparity in eighty years. Why is the economic system that made America strong suddenly failing us, and how can it be fixed? 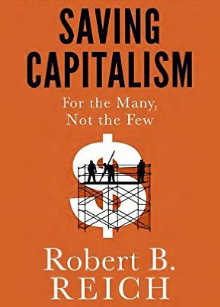 Leading political economist and bestselling author Robert B. Reich presents a paradigm-shifting, clear-eyed examination of a political and economic status quo that no longer serves the people, exposing one of the most pernicious obstructions to progress today: the enduring myth of the “free market” when, behind the curtain, it is the powerful alliances between Washington and Wall Street that control the invisible hand. Laying to rest the specious dichotomy between a free market and “big government,” Reich shows that the truly critical choice ahead is between a market organized for broad-based prosperity and one designed to deliver ever more gains to the top. Visionary and acute, Saving Capitalism illuminates the path toward restoring America’s fundamental promise of opportunity and advancement.

"But an attack by Oprah, armed with withering truth..."

That's a rare, but welcome, move for her.

It is surprising to find that it is possible for a person to be so lacking in ethics and integrity that Trump and his people realize they are better off without him than with him. (It isn't surprising that, given someone that bad exists, it is Puzder.)

Puzder is out because he hired an illegal immigrant. OMB director might survive that, but not for Labor(Linda Sanchez), Attorney General(Zoe Baird), or DHS(under W).

"Puzder is out because he hired an illegal immigrant. "

Hardly a major issue - republicans love to complain about "those people" while hiring them. He did have problems paying here, not paying taxes, and being misleading about it.

He was also advertised as someone who had a history of fighting for workers, but in reality eliminated jobs at CKE and put his primary focus on overseas expansion (not necessarily bad, but not the same as working for jobs here, as advertised).

There have been wage and hour violations at over 60% of the restaurants operated by his company. There are still numerous lawsuits over employees being cheated of overtime, denied breaks that are mandated by law, and requiring workers to stay in the building after they clock out of their shift so that can do more work - off the clock.

He has claimed that he is not responsible for the types of violations at the restaurants of franchisees and action was taken when violations were discovered - but no evidence of those actions has been discovered in the lawsuits.

In addition to his personal hypocrisy over undocumented workers, a 2014 audit of Carl Jr and Hardee's restaurants in the southwest and midwest found one in three of their employees were undocumented - 1200 in total were fired.

He has said his company's restaurant chain, Hardees, hires the "worst of the worst" -- "it's kind of the bottom of the pool". (From Bloomberg: his first memo to Hardee's managers said "No more people behind the counter unless they have all their teeth.")

Yeah, this isn't just about him being a dishonest hypocrite in his personal behavior - he is especially scummy as a person. That's probably his appeal to the modern right: as I said earlier, the amazing thing is that the scum we have in the White House found him so toxic they decided they couldn't use him.