Apparently worms have even better memories than dolphins! 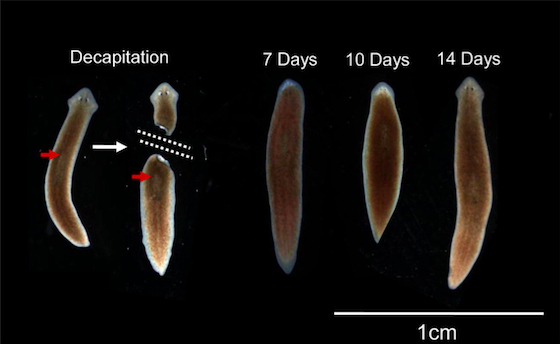 Figure from Journal of Experimental Biology.

Researchers Tal Shomrat and Michael Levin at Tufts University have found that planaria worms are able to quickly relearn lost skills after literally losing their heads.  The researchers trained the worms to find food in an environment with bright light and open space, both considered uncomfortable to the creatures. The time it took for worms to adjust to the environment and find food was recorded. Then, the researchers severed their heads and waited for the head and brain to regenerate (see image above). What they discovered was that the worms with regenerated heads were able to find the food faster than novice worms after being reminded only once of how to find it. These findings suggest that "memories" may be stored outside of the brain region in planaria or that the original brain may have trained the nervous system, which regulated how the new brain grew and what memories it regained.

Now THAT is an amazing memory!

Shomrat T, Levin M. An automated training paradigm reveals long-term memory in planaria and its persistence through head regeneration. The Journal of Experimental Biology, In Press.

I am fascinated by how worms can still keep their memory even after the regeneration of their head. However, will the worms lose their memory slowly after several times of regeneration? Or will the memory be stored in the nervous system forever?

The training of the worms, and how memory is stored outside of the brain region, let one think about how it is similar to the muscle memory in humans. Such as, a person who can play the piano when they are young and as they grow older (losing their memory), they can still play the piano due to their muscle memory. The difference is that there is no regeneration taking place in humans.