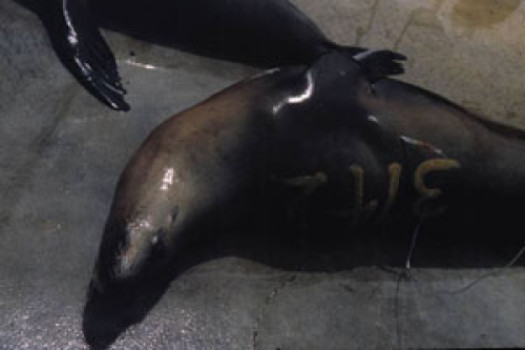 According to a press release from Stanford University, California sea lions develop epilepsy from exposure to a toxin produced by algae called domoic acid. The animals develop seizures which can result in memory loss, tremors, convulsions and even death. The hippocampal region in the brain of the affected sea lions shows similar damage as humans with epilepsy, with losses of about 50 percent of neurons. Dr. Paul Buckmaster, professor of comparative medicine at Stanford was quoted as saying, "We found there was a loss of neurons in specific patterns that closely matched what is found in people. And there is synaptic reorganization — a rewiring of surviving neurons. This also matches what is found in humans with temporal lobe epilepsy." This form of epilepsy is the most commonly observed in humans and there is currently no cure. It usually starts following a traumatic brain injury, fever or lack of oxygen that causes an initial seizure and later on progresses to epilepsy with periodic seizures.

According to the press release, hundreds of California sea lions have washed ashore every year. The problem is with recent increases in algae blooms small fish that sea lions feed on, such as anchovies, accumulate domoic acid.

The hope is that understanding epilepsy in sea lions may lead to better treatments for sea lions and humans alike. Dr. Buckmaster said, "What we need is an interventional treatment — both in humans and sea lions. You’d give the treatment right after the brain injury, and that would prevent them from developing epilepsy. That’s the dream, but we are not there yet."

Shannon Collins
u14137535
It is very interesting that epilepsy does not only effect humans but sea lions as well. Would any other animals be affected with epilepsy that consume the demonic acid founded in Algae blooms? Perhaps there are some similarities between the human brain and the sea lion brain that can develop epilepsy?

why not test the human epilepsy medication on the sea lions, since the same disturbances occur in both species?And i believe that would be another way to get to the real cure of similar epilepsy in all species that have similar effects

Is there any other sea creatures that feed on these particular fish? If so, could these creatures also develop epilepsy? Could epilepsy medication for humans be used in the treatment and understanding of epilepsy in sea lions and other animals with similar forms of epilepsy?

It is fascinating to know that epilepsy occurs not only in humans, but also in sea lions. Looking from a medical point of view, would it be possible to use sea lions to find a cure for epilepsy in humans? Meaning to test the treatment or cure for humans on sea lions. If they try to do this, will the sea lions and humans respond the same way to treatment? It may seem unethical to use the sea lions like “lab rats”, but if it works, both species could benefit!

It is fascinating to know that epilepsy occurs not only in humans, but also in sea lions. Looking from a medical point of view, would it be possible to use sea lions to find a cure for epilepsy in humans? Meaning to test the treatment or cure for humans on sea lions. If they try to do this, will the sea lions and humans respond the same way to treatment? It may seem unethical to use the sea lions like “lab rats”, but if it works, both species could benefit!

its very interesting to find out that animals can also suffer from epilepsy. its bad enough to witness a person going though a seizure, i can imagine a helpless sea lion going though the same thing.
at least the good thing is that there are people currently working on preventing humans and creatures from developing epilepsy.

I have to agree with you Brits it may really seem unethical but but if its for a good cause like this one i am 100% behind it. I think some animals might definitely get sick from digesting the acid since animals have many similarities but, not all of them ofcourse as some have pro-active defence-mechanism.

what an educative blog, its quite surprising that animals also experience similar infections that humans experience. i am starting to have an idea that people might have caught the acid that causes epilepsy from sea food(animals that feed on sea lions or so)

Humans and Sea lions like dogs, dolphins etc, are able to co exist and often mutually benefit from one another because we all intelligent beings. Sea lions are also very calm beings which makes them easy to approach. This common feature is based around the structure and function of our brains. Sadly sharing intelligence is not the only outcome of a developed brain ( ie Hippocampus ), Deficits such as neural loss and seizures are also a possibility.
11071142