Congratulations to Mallory Ballinger, a graduate student from the University of Minnesota-Duluth, who is the 2015 recipient of the Dr. Dolittle Travel Award! The purpose of this award is to recognize an outstanding graduate student or postdoctoral fellow involved in comparative and evolutionary research and to provide assistance for them to attend the annual American Physiological Society Experimental Biology meeting. The application process includes the submission of a blog entry based on their research. She will be presenting her research at the upcoming Experimental Biology meeting in March. 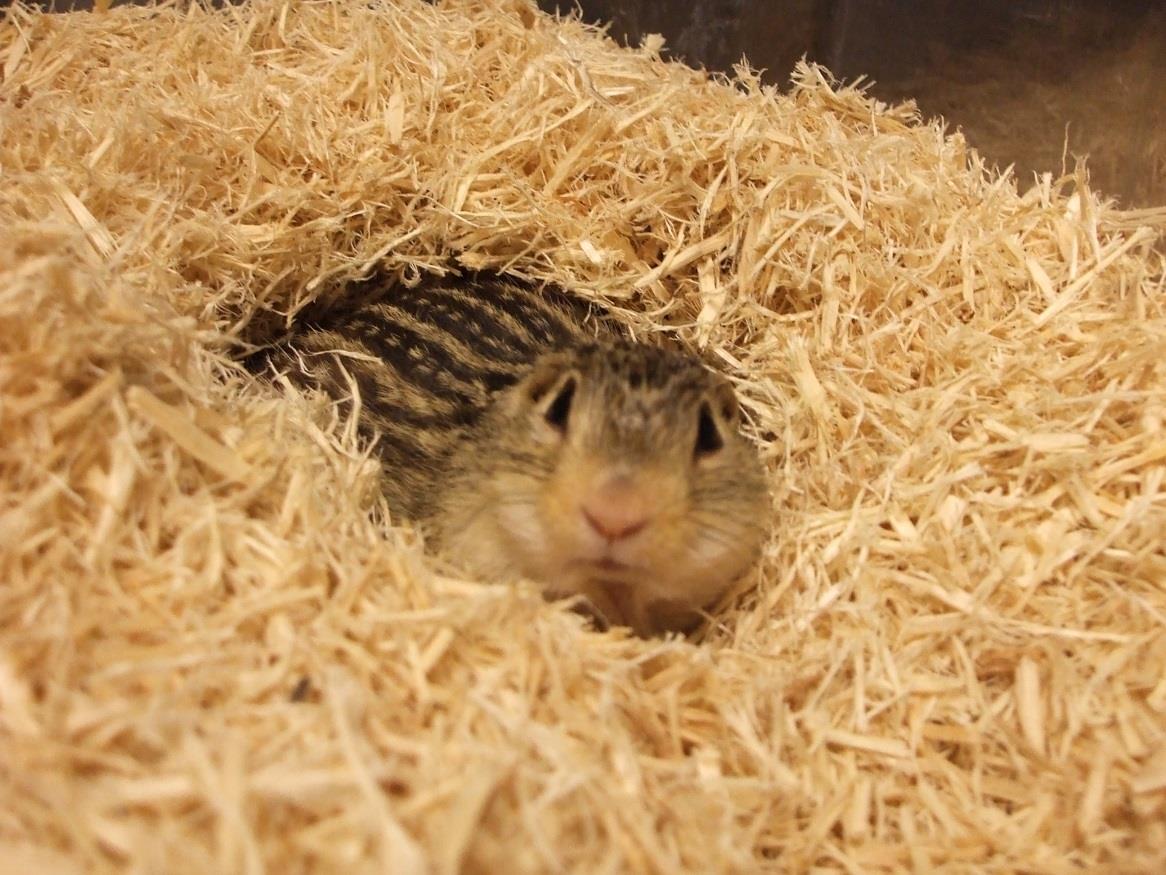 Winter brings cold temperatures, blistery winds and large amounts of snow. If it were not for technology, we humans would be dealing with cases of starvation and hypothermia regularly. Most mammalian species, however, do not have the luxury of technology; thus, they must deal with the hardships of Mother Nature and winter in other ways. Mammalian hibernation is an evolutionary strategy that allows certain species to survive long periods at near-freezing temperatures with little or no food. It is characterized by profound reductions in metabolism, oxygen consumption, and heart rate as an animal enters a state of physical inactivity known as torpor. During winter hibernation, thirteen-lined ground squirrels enter a state of torpor in which their heart rate drops as low as 3-10 beats per minute (bpm), they consume only 2-3% of their normal oxygen levels, and they maintain a core body temperature as low as 41oF. The torpid state is not continually maintained throughout the hibernation season, but is interrupted by a series of short, periodic interbout arousals (IBAs). During this 2-3 hour transition out of torpor, oxygen consumption increases 50-fold, core body temperature increases from 47 to 98.6F, and heart rate explodes from less than 10 bpm to over 400 bpm. Over the course of a hibernation season, ground squirrels cycle between torpor bouts and IBAs numerous times until they emerge in the spring.

Arousal from torpor ("inactive") into IBA ("active") presents extreme changes in energy demand. Understanding how the hibernator brain copes with this change during hibernation, along with seasonal changes, was the overall goal of this research. The focal point of this study was at the organelle level, specifically mitochondria. Mitochondria use various substrates to pass electrons successively to enzyme complexes in the electron transport system, with oxygen being the final electron acceptor. This is how mitochondria generate energy for cells. Overall, hibernator metabolism is suppressed during hibernation to save energy. Therefore, it was hypothesized that brain mitochondrial metabolism will be suppressed during the hibernation season compared to active seasons. To test this hypothesis, the researchers examined the mitochondrial function of brain in thirteen-lined ground squirrels across four time points: Summer, Fall, Hibernation (Torpor and IBA), and Spring. Oxygen consumption (i.e. respiration rates) of isolated brain mitochondria were measured using an oxygen electrode. Mitochondrial respiration was highest in Hibernation compared to the active seasons. The mechanics of respiration are controlled by membrane potential, the "intactness" of mitochondria. To examine this, the researchers measured mitochondrial membrane potential using a specialized electrode. No significant differences were found between Spring, Summer and Fall.

Although the overall metabolic rate of a hibernator is suppressed during hibernation, the results of this study do not support the original hypothesis. Brain mitochondria consume more oxygen during hibernation than the active seasons, suggesting that the brain requires more fuel and resources to function efficiently during hibernation. This study not only provides insight into the molecular mechanisms employed by a hibernator’s brain, but it also aids in understanding the metabolic regulation and common strategies employed by small hibernators in response to environmental stressors. Broader applications from this study may impact the biomedical field. Mitochondrial diseases, such as dementia, are common in today’s society. Understanding how mammalian hibernators undergo and survive extreme changes in mitochondrial metabolism may result in strategies aimed at treating human mitochondrial diseases.

Hi Clarice,
If thirteen-lined ground squirrels did not acquire enough fat in preparation for hibernation, they would not be able to hibernate the entire six to eight month duration. They would consume all of their fat reserves before the hibernation season would end, and thus, they would emerge from hibernation. If environmental conditions were unfavorable at the time of emergence (i.e. unavailable food sources), starvation and death would probably occur.
If thirteen-lined ground squirrels were to be disturbed while hibernating (while in torpor), they would more than likely emerge from torpor into an IBA. They would stay in this arousal state for about 12-24 hours, and then would go back down again into torpor. Arousing from torpor into IBA is energetically costly. Therefore, if they keep becoming disturbed during hibernation, they would deplete their energy stores faster, which would potentially affect how long they would be able to hibernate. For example, it has been suggested that white-nose syndrome in bats disturbs their hibernation, making them arouse more often than normal from torpor. This in turn rapidly depletes there energy stores and affects their ability to hibernate, which ultimately may be playing a role in the high mortality rates of hibernating bats affected by white-nose syndrome.

Not taking the devastating diseases that effect the hibernation of certain animals into consideration it is quite fascinating how each species such as the thirteen-lined ground squirrels naturally know the amount of fuel or energy they must consume for hibernation, to sure that they survive or remain in hibernation throughout winter.

With regards to this experiment that was conducted, I understand that the information from it can be used to help mitochondrial diseases in humans. I would just like to know if the behaviour of the mitochondria in squirrels can be seen as similar to the behaviour in humans- if not how would this affect the link they have made with the squirrels behaviour during hibernation and then applying this to humans.
u15015719

I totally understand the torpor proses of the hibernating squirrel. Its unbelievable that they can take control of their whole body but could these torpor proses lead to an deceases of the animal immune system because of the low metabolism ?

This is very interesting. Before reading this I thought animals just sleep during hibernation. The sudden changes from the torpor state to the normal state must be unhealthy for the squirrel. 15120521

When the ground squirrels inter the torpor state , they cannot respond to danger or defend themselves. What do they do to minimize the risk of predation ?

When I read about animals that hibernate, I always just though that they sleep through winter. I had no idea the whole process was so complex and that it involved so many aspects just to keep the animal alive. While reading about torpor and the other mechanisms in place to keep an animal sustained through its winter sleep, it made me think about how summer sleep (estivation) works. Do these processes function in the same basic way or are the complete opposites of each other?

As hibernation is a extended form of torpor and they are both associated with a controlled reduction in body temperature lower oxygen levels, heart and metabolic rates and less blood flow it is interesting that torpor is driven by ambient temperature and food availability, while hibernation is associated with day length and hormone changes.
Both contributing to surviving the extreme colds, but 'activated' through different aspects of nature.
It amazes me everyday how perfect nature is put together.
15004512

When the ground squirrel enters trooper state they minimize the risk of predation by entering themselves in the hibernaculum and must dig a new hole to the surface in spring.

It is interesting that both torpor and hibernation are associated with a reduction in body temperatures, a decrease in metabolic and heart rates ,oxygen flow and blood flow. But ambient temperature and food availability leads to torpor while hibernation is associated with changes in hormones and the lengths of days.
Furthermore it is fascinating how amazing nature works and how these squirrels are adjusted to survive these extreme colds.
15004512

It is truly amazing to see how animals cope under change in internal and external environment. By the decrease of temperature in the body of the squirrel it can go into torpor. Because the squirrel is underground not all heat is lost. The hole keeps most of the heat inside because the heat cannot escape, the hole can be seen as a closed system. It is truly remarkable how nature work together so that species can survive during winter seasons.

It is amazing how nature works because of the fact that the squirrel could come out of hibernation by digging a new hole to the surface when needed. u15086951