Discovery of a warm-blooded fish 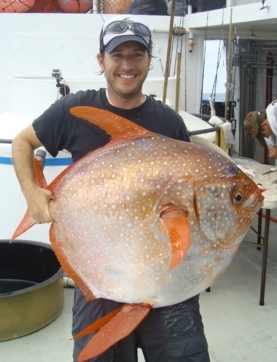 The opah (Lampris guttatus), otherwise known as a moonfish, lives in the deep sea where warm blood can be advantageous. According to a quote from Nicholas Wegner (NOAA) posted in Live Science, "Increased temperature speeds up physiological processes within the bod. As a result, the muscles can contract faster, the temporal resolution of the eye is increased, and neurological transmissions are sped up. This results in faster swimming speeds, better vision and faster response times."

Wegner also told Live Science, "The opah appears to produce the majority of its heat by constantly flapping its pectoral fins which are used in continuous swimming." A new study published in Science May 14, showed that the blood vessels which carry oxygen rich cold blood from the gills are next to the vessels that carry warm blood. This serves as a heat exchanger to warm up the blood. These fish do not exactly warm up to mammalian temperatures mind you. By "warm-blooded" scientists are referring to the maintenance of 9 degrees Fahrenheit even as the fish dive down to 45 meters (150 feet). It is safe to say however, that the fish are warmer than their surrounding environments allowing them to swim at deeper depths for longer durations than their cold-blooded friends.
Source:LiveScienceScientific American
Tags
Life Science
discovery
ectotherm
endotherm
fish
ocean
opah
warm blooded

This study has been all over the internet since it appeared, but it is certainly NOT the first discovery of a warm-blooded fish. Carey and Teal (1966, PNAS) discovered almost 50 years ago that tuna, and also some sharks, maintain body temperatures significantly above that of their surroundings, by use of counter-current heat exchange in their bodies. I gather that the opah may be particularly good at this, but that's a whole different story than what is presented here, and in other accounts I have read. This is just one where it's particularly easy to comment. Any thoughts, Dr. Doolittle, about the tendency of PR offices these days to drastically over-sell the results of their clients?

Tuna maintain a body temperature above that of the surrounding water too...

A small typo in the article: it's 9 degree Celsius, to compare to the surrounding water at about 4°C.

@ecologist and John Bowman: indeed other fishes do elevate the temperature of parts of their body. For instance the tuna has warm skeletal muscles, brain and eyes. What is special with the opah is that almost all its body is warmer, including the heart, and it's only in the gills that the blood gets colder. More on this here: http://www.washingtonpost.com/news/energy-environment/wp/2015/05/14/sci…