One of the coolest dinosaurs you learn about as a kid are Pterodactyls (really Pterosaurs, but who's checking). As giant flying lizards, these guys are thought to have dominated the skies long before birds existed (from the late Triassic to the end of the Cretaceous, 220-65 million years ago). The biggest of the bunch are Pteranodon and Quetzalcoatlus, which are thought to have weighed as much as 250 kg with wingspans in excess of 30 feet.

But a new study, published in PLoS ONE is casting doubt on the ability of these massive winged dinos to actually fly. Instead, their results add to others which support these creatures as land animals who staked their prey, not swooping in to grab it.

In the study of flight, scientists generally believe that there is a "maximum size" that animals can be and still be able to fly. It has to do with competition between muscle power and power needed for flight. The heavier a creature is, the more force it must create with its wings to be able to lift that mass off the ground. However, muscles can only get so strong and bones can only resist so much force before breaking, causing there to be an maximum size limit, after which the animal is just unable to produce enough force. However, it's debatable exactly where this upper limit is because creatures use different wing shapes, sizes and flapping patters to achieve flight.

The extinct pterodactyls, though as big as a modern giraffe, have been compared in wing shape and presumed flight method to modern large birds like albatrosses, which are called procellariiforms. So researchers looked at how today's large birds are able to fly, and what kind of weight limits might exist for them.

To see how the birds flew, they attached little acceleration data loggers attached to the birds wings to chart the flapping movements. They compared these data to the bird's weight, wingspan and wing surface area to see whether there was a correlation between how the birds flew and how big and heavy they were. They also took physiological measurements of the birds exertion during these behaviors.

They found that the birds used two types of flapping to fly: a high-frequency one to get off the ground and a low frequency one once in flight to maintain altitude. As predicted, both high and low flapping frequencies decreased according to the size of the bird, suggesting that at a certain weight, they simply could not flap their wings fast enough to attain lift off or maintain flight in the absence of wind. The researchers calculated that this weight limit was around 41 kg, which is about 1/2 of what the average large, ancient pterodactyls are thought to have weighed.

"Our study of living Procellariiformes as model animals suggests that if pterosaurs larger than 41 kg (or 5.1-m [>15 foot] wingspan) had the narrow wings, they could not have attained sustainable flight in environments similar to the present," write the authors in their concluding paragraph. They go on to add that "the results of the present study lend support to a recent reappraisal suggesting that large pterosaurs were terrestrial stalkers, finding much of their food via terrestrial, ground-level foraging." 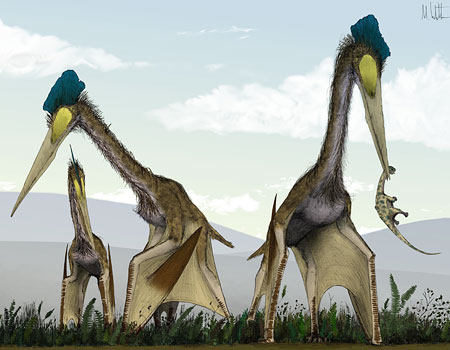 In other words, the study authors suggest that the great flying dinosaurs actually couldn't fly, at least not well enough to use it as their main hunting technique. Instead, the Pterodactyls were grounded. They do note, however, that their data don't completely rule out the possibility of flight. Other conditions could have been different in the past, including a lot more wind and thermal updrafts (like the ones which fuel vulture flight). Even the air itself could have been denser, or gravity slightly weaker. So the majestic image of huge, flying Pterodactyls isn't an impossibility.

None the less, the researchers do a pretty good job of destroying the fantasy dinosaur images of children everywhere by knocking the Pterodactyls out of the sky. Those flying monsters are the best part! And if they really didn't fly, well, dinosaurs just got a little less cool in my book.