Falling Walls: in which Tomás Saraceno fries my mind

From the moment he springs onto the stage, Tomás Saraceno's  demeanour marks him out as an artist. Dressed in jeans and a hoodie, and wearing a scruffy beard, he stands in contrast to the parade of smartly-dressed academics that have so far made up the Falling Walls conference.  Saraceno jokes that he has “about 400 slides” to get through in his 15 minute slot, yet it soon becomes clear that he really is going to try and get through them all.

Images whizz by as Saraceno hammers through his portfolio, and we’re flashed photos of abstract sculptures in metal, glass, plastic, some with people crawling over them, some floating in endless space. He rambles haphazardly through an idea to connect a fan’s rotating blade with a camera shutter, to connect the wind speed with the film speed of the animation produced. Before we have time to digest that, Saraceno whisks us to the Bolivian salt flats after a recent rain, where people wander across a giant mirror, suspended between two blue skies. Then we’re in Italy, where gallery visitors clamber over a giant plastic bubble that emerges from a room below. Visitors entering that room break the pressure seal, sending those above tumbling down on a rapidly deflating balloon. This becomes a recurring theme in Saraceno’s work – playing with our sense of space and interconnectedness, where the structures around us react and move just as we do. 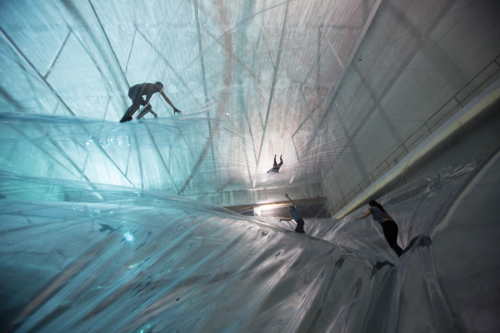 But there’s precious little time to stop and think about this as we’re thrown through a cavalcade of images, designs, mock-ups, and ideas in a visual stream-of-consciousness.  The bulging plastic bubble detaches from his artworks and takes to the sky, a floating city above tropical islands, a fever dream of architectural freedom. The city becomes a word, the idea of a city, and now people all over the world are stitching scraps of plastic together into a giant balloon that floats above them, a patchwork community in the sky. There’s another balloon, shaped like a giant condom, sent over the African states like a totem of responsible promiscuity, a confounding invasion by the airborne wing of the Western sexual and reproductive health outreach unit.

More shapes loom over stark landscapes, lattices of molecules break off from the world and drift in space, people cocooned in plastic bubbles and black web. Saraceno’s voice is little more than a staccato of Spanish-dipped syllables that ricochet like tiny pebbles between the grasping fingers of my mind as we’re plunged into more webs, spiderwebs now. Black strands stretched in geometric patterns through gallery space intergalactic spiders black widows boxes parcels spiders in plastic boxes weaving gossamer clouds of web on the cusp of perception. Saraceno slices the web into fragments with a laser, cutting vertical sections that are computed and tomographed and reconstructed until finally the black widow’s web emerges two years later, full form, creeping through the brilliant white of an exhibition space. 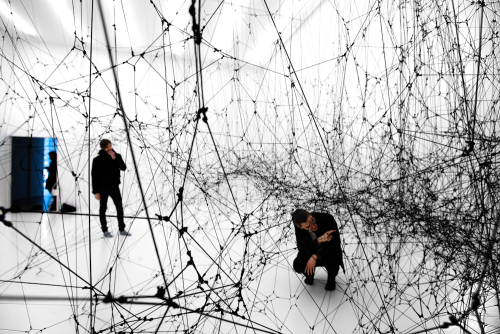 The slides go blank but Saraceno cruises onward, holding us all within his reverie, trapped as we are like the tiny flies in the white silk cocoons of his mind, and there are space spiders, microgravity webs, stars and planets caught in tapestry of his imagination.

And then it’s over, firmly and assuredly over, and still I can’t figure out how Saraceno plucked such a decisive finish from this swirling nebula of shapes, ideas and emotions but it is over, and we are clapping, and it was incredible. Just don't ask me what it was about.