A couple of surprising images from the medical literature - two patients with chopsticks buried deep in their skulls.  The first belongs to a 38-year-old woman who was dancing at a wedding while eating with chopsticks. Someone accidentally pushed into her from behind, causing the woman to fall forward onto one of the chopsticks. The wooden skewer went straight through the back of her mouth, into the skull and snapped against the back of it, coming so close to the carotid artery that a separate image shows the major vessel pushed to one side(!).  Despite some length of it still jutting out of her mouth, the chopstick was lodged so firmly in place that it had to be hammered out from the reverse side. After a successful operation at King's College Hospital, the woman was discharged suffering some nerve damage to the left side of her head (affecting speech, sight and hearing) but was otherwise unharmed. 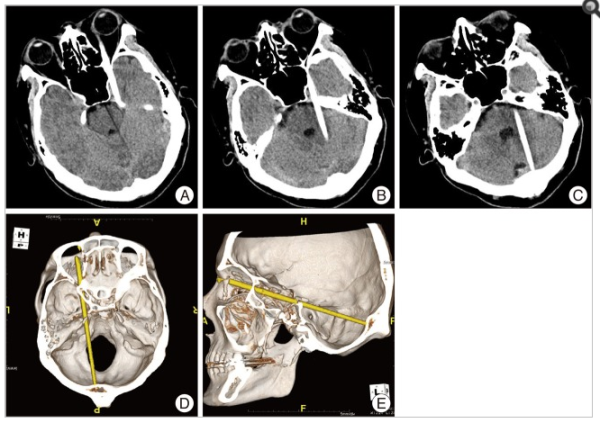 The second image shows the skull of another 38-year-old, this time a Korean man who fell from a chair while eating, driving a plastic chopstick into his eye socket. From there it travelled through the optical canal (the hole in your skull along which your optic nerve runs from your eye to your brain) and disappeared - all 14cm of it! The chopstick was removed by surgeons trans-orbitally (i.e. reaching behind the eyeball) without incident. The patient was kept for three weeks observation and then discharged.