On the back of an envelope: The water benefits of an efficient toilet

Here is the second in what will be a series of posts on how little things like changes in technology we take for granted, or simple behaviors, can have a big impact on water use. The first looked at turning off the water when you brush your teeth: a seemingly trivial thing. It turned out not to be so trivial. (I will, on occasion, also blog about the “not so little” things like fundamental changes in our agricultural systems, dietary choices, and industrial processes.)

The Pacific Institute has done extensive and groundbreaking research over the past 25 years on a wide range of water, climate, energy, and environmental issues. One focus has been on how to use water more efficiently to do the things we want to do – a focus on “efficiency” and “productivity” – not deprivation.

It turns out that our toilets are, typically, the largest single user of water inside our homes and offices. Here is a simple, but significant figure: what kind of savings might result from replacing old toilets with efficient ones?

So, get out the back of your envelope and let’s play some numbers games. Here are some basic data and assumptions for people living in the U.S.:

Under these assumptions, if you have an old toilet, you flush away around 11,000 gallons of water per year (6 gallons per flush x 5 flushes per day x 365 days per year, to only two significant figures).

What if you replace that old toilet with a modern, high performing HET?

Can we extrapolate potential water savings of this efficiency improvement to the whole of the United States? This gets a bit harder. There are 314 million of us – today’s population of the United States. But what is the distribution of the kinds of toilets? We don’t know, precisely. But there are some estimates.

According to the Plumbing Manufacturer’s Institute there are 225 million toilets in the U.S. Of these, around 50 million toilets are low-flow or around 22 percent. In California, where toilet standards have been in place longer, a substantially higher fraction – over 50% -- of current toilets are more efficient models, mostly ULFTs.

If we accept this more conservative estimate (that half of the toilets in the US are inefficient and half are more efficient), and that the proportion of flushes is comparable, then half of us are flushing at around 6 gallons per flush and half at around 1.6 gallons per flush (very few HETs have been installed yet).

Total water going down the toilet (and high-quality potable water, at that)? Nearly 2.2 trillion gallons per year.

Thus, the water savings from replacing all toilets with HET toilets? More than 1.4 trillion gallons per year.

1.4 trillion gallons per year is more than a quarter of the entire annual flow of the Hudson River, or the Colorado River, or (to use the silly but ubiquitous standard measure) would fill more than 2 million Olympic-sized swimming pools.

But remember, in addition, there are over 2 billion people worldwide with no adequate toilets or safe sanitation at all. That’s for another post – but appreciate your toilet.

And a special note for those who think their efficient toilet doesn’t work. You bought a bad toilet. There are great informational sites that rate the performance of all the different models: the MaP testing standards, with data on thousands of toilets. Pick one that performs 800 or higher (up to 1000). They are superb. (See the Figure, below. If you filter for any manufacturer, at a rating of 800 or above, you get nearly 1000 choices!) If your “efficient” toilet doesn’t work, it is because you bought a badly designed model. Two years ago, this week, Rand Paul went on a toilet tirade in a Congressional hearing because, apparently, he bought a crappy toilet, which he considered the government’s fault. It was his fault. There is no excuse today for making uninformed decisions: great information is available to everyone on the performance of different toilets or other water-using appliances. [My HET (made in the USA) is the best performing toilet I’ve ever had, and it even stars in the recent movie “Last Call at the Oasis.”]

The sum of even modest individual actions can turn out to be significant. 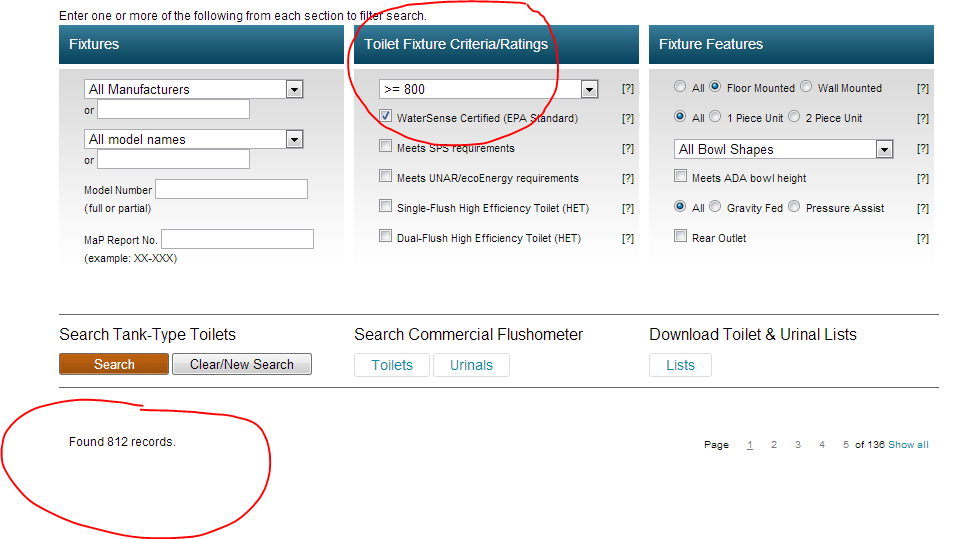 The MaP database of efficient and effective toilets. Pick a rating of 800 or higher. You get nearly 1000 choices!

[Comprehensive information on water use by toilets, current laws, technology advances and more can be found at the Alliance for Water Efficiency: http://allianceforwaterefficiency.org/toilet_fixtures.aspx. ]

Couldn't agree with you more, Peter! If readers want all the information they can 'handle' on toilets, the best choice is to go here: http://www.map-testing.com/
You will find all of the MaP features mentioned in your article PLUS, if you are researcher of even just wondering about certain toilet 'issues', then go here to our "Reports" page and view over 100 reports and commentaries free for download: http://www.map-testing.com/view/reports.html
Also, we should always remember to look for toilets, faucets, and showerheads that carry the U.S. EPA's WaterSense label. These are the products that have been designated as efficient AND good performers!

And, YES, if Rand Paul and his minions don't do the research, then of course it is possible they will end up with a 'dog'. Whether one is looking for an automobile, a refrigerator, a 'green home', or a toilet, doing one's homework is critical.