The Death of the Aral Sea

In the 20th century, society was either ignorant of, or ignored, the consequences of bad water management. The goal was economic development at all costs. Over the past few decades, we've learned about the ecological and social implications of the misuse of water, and some efforts have been made to protect natural ecosystems, restore a modicum of flows, bring local communities into the discussion about water policy and infrastructure. These are steps in the right direction.

But sometimes our failures have been monumental -- and uncorrected.

Perhaps the best, or worst, example, is the complete destruction of the Aral Sea. Once one of the four largest lakes in the world by surface area, fed by the Amu Darya and Syr Darya rivers, it has now been destroyed by the complete diversion of inflows to grow crops -- largely cotton -- in the arid regions of  Uzbekistan (with parts of the watershed of the Sea in Tajikistan, Turkmenistan, Kyrgyzstan and Kazakhstan).

All 24 species of fish endemic to the Aral Sea are now extinct. Dust storms spread respiratory diseases. And the local climate has been altered.

Here is an animated gif showing the disappearance of the sea between 2000 and just last month: August 2014 (data/satellite images courtesy of NASA). 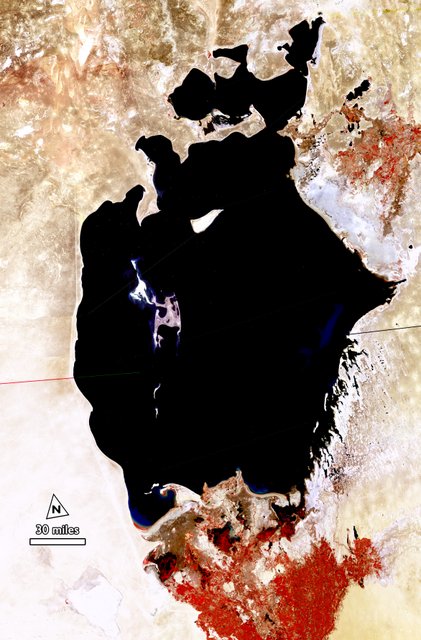 This should be a lesson to all of us. I hope it will be, but in the United States we are heading for the destruction of the Salton Sea, with similar consequences. We are drying up more and more of our rivers before they reach the ocean. And we see even the Great Lakes suffering from water quality contamination and massive algal blooms, potentially worsened by climate change.

The plight of the Salton Sea is not analogous to the destruction of the Aral Sea. The Aral Sea is/was a natural formation. The Salton Sea was formed by another man made natural disaster in 1905 when the Colorado river in its entirety was diverted into a desert basin for two full years.

One difference the Salton Sea was caused by a man made canal failure in 1906. The diversion system from the Colorado to the Imperial valley failed open during floods and water ran into the then dry basin. So in the absence of man there would be no Salton Sea.