The Impacts of California’s Drought on Hydroelectricity Production

California’s hottest and driest drought in recorded history has shifted the sources of electricity with adverse economic and environmental consequences. The Pacific Institute has just completed and released a report that evaluates how diminished river flows have resulted in less hydroelectricity, more expensive electricity from the combustion of natural gas, and increased production of greenhouse gas emissions.

The current severe drought has many negative consequences. One of them that receives little attention is how the drought has fundamentally changed the way our electricity is produced. Under normal conditions, electricity for the state’s millions of users is produced from a blend of sources, with natural gas and hydropower being the top two. Since the drought has reduced the state’s river flows that power hundreds of hydropower stations, natural gas has become a more prominent player in the mix. This is an expensive change.

According to the Institute’s report, between October 2011 and October 2014, California’s ratepayers spent $1.4 billion more for electricity than in average years because of the drought-induced shift from hydropower to natural gas. In an average year, hydropower provides around 18 percent of the electricity needed for agriculture, industry, and homes. Comparatively, in this three-year drought period, hydropower made up less than 12 percent of total California electricity generation. The figure below (Figure 6 from the new study) shows the monthly anomalies in state hydropower generation in wet and dry years, and the severe cuts over the past three years. 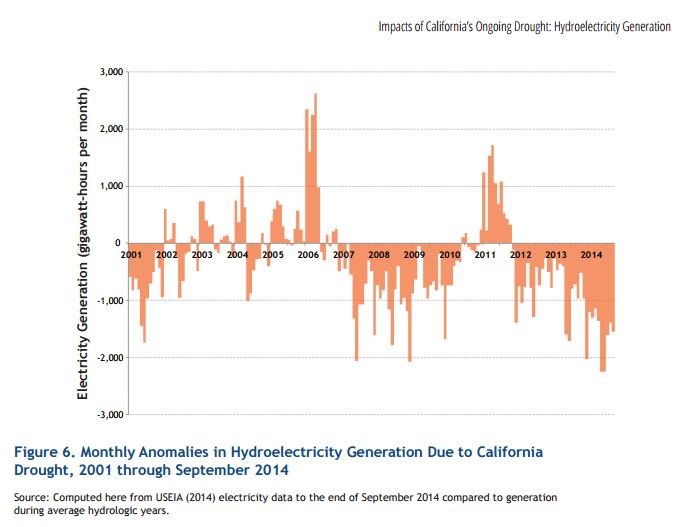 A longer view reveals an even more startling economic impact: factoring in the dry years from 2007-2009, the total additional energy cost to the state’s electricity users during the six years of recent drought was $2.4 billion.

This increased reliance on natural gas for the state’s electricity production also has environmental costs. Hydropower has some well-known environmental impacts, especially on rivers and aquatic ecosystems, but it produces few or no air contaminants, whereas burning natural gas emits many pollutants, including climate-changing greenhouse gases. During the 2011- 2014 drought period, burning more natural gas to compensate for limited hydropower led to an eight-percent increase in emissions of carbon dioxide and other pollutants from California power plants.

If the current drought persists, water flowing to drive hydroelectric turbines will continue to shrink and expensive and polluting natural gas will become even more of a factor in the electricity production game.

The full report can be downloaded free here: http://pacinst.org/news/new-report-reveals-drought-increases-energy-costs-and-climate-changing-pollution/.