From the Sun to Your Sky in just three days!

Skinner: Well, that was wonderful. A good time was had by all. I'm pooped.

Chalmers: Yes, I should be goooo-(notices kitchen on fire)-od lord, what is happening in there?

Chalmers: May I see it?

Agnes: Seymour, the house is on fire!

Skinner: No, Mother, it's just the Northern Lights.

Something rare and exciting happened just three days ago in our Solar System. Our Sun, giver of life, heat, light, and energy, experienced a coronal mass ejection. 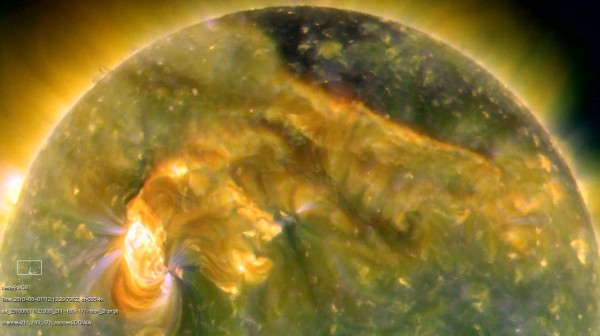 You can see the "flaring" region in the lower left of the above image. (And get a video here.) But we have another satellite, SOHO, that orbits between the Earth and the Sun, that's observed many of these Coronal Mass Ejections. Here's an animation of one from 2001. 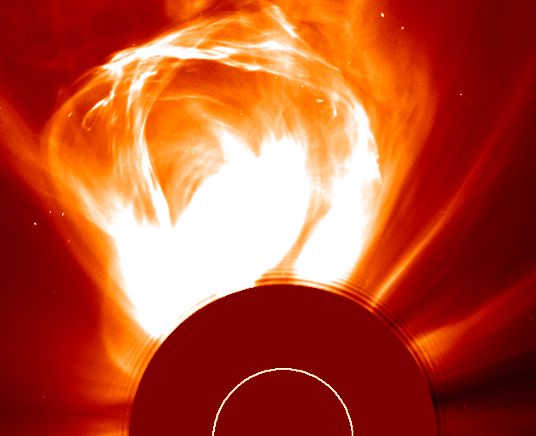 In a typical coronal mass ejection, the Sun spits out about a billion tonnes worth of mass, or about as much mass as a large (~1 km diameter) asteroid. (About 10% as large on a side as Gaspra, shown below.) 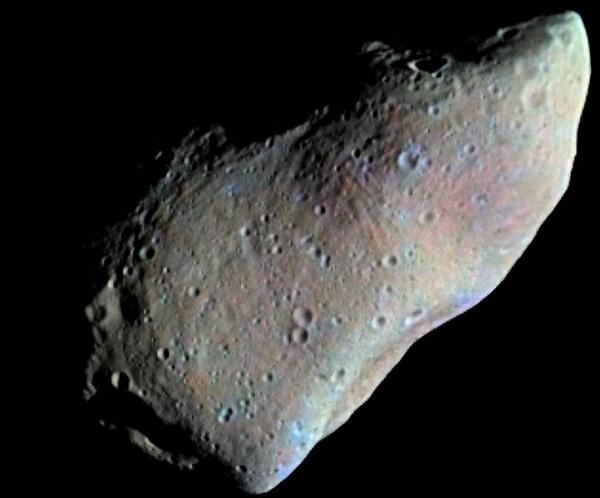 But this coronal mass ejection was something special. Not because it was larger than most, or brighter, or faster. This one was special because -- like many (but not most) CMEs -- it was aimed right towards Earth. 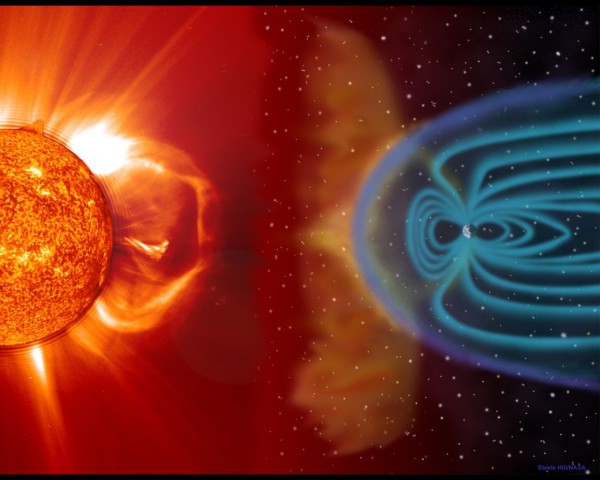 Luckily for us, this storm of hot plasma, headed right towards us at 1,000 kilometers per second (or about 100 times faster than any rocket or spacecraft we've ever built), has to contend with the Earth's magnetic field.

The Earth, right now, has its North Pole tilted towards the Sun (and the South Pole tilted away), meaning that nearly all of the charged particles streaming towards us from the Sun were deflected away by our magnetic field, except near the North Pole. (This happens just as frequently when the South Pole is tilted towards the Sun, as shown in the image below.) 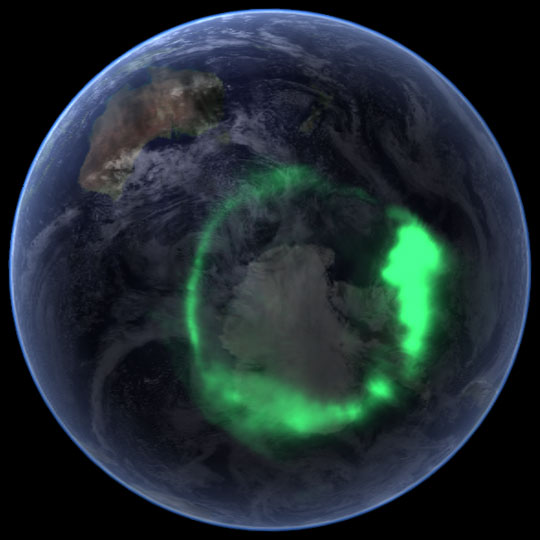 The result? The charged particles make it all the way to the Earth's upper atmosphere, where they collide, producing the beautiful phenomenon known as an aurora! 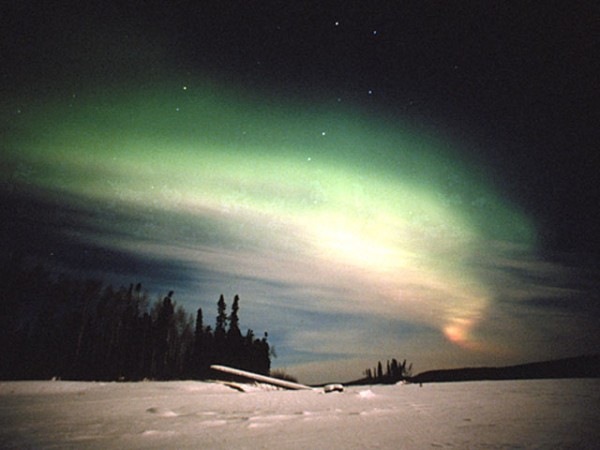 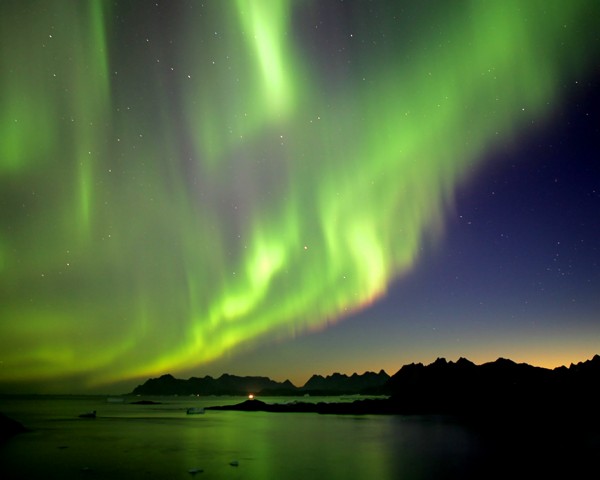 Because it's happening in the upper atmosphere instead of in space, you need to be very far away from the equator to see it. (Like the image below, from Alaska.) 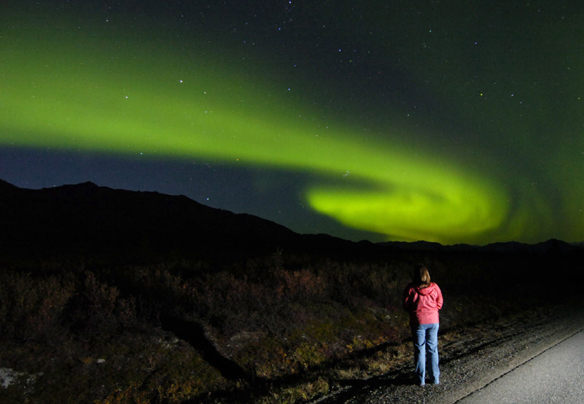 Keen observers in the northern parts of Europe and North America last night, at latitudes above 48 degrees (or so), were able to get some great auroral viewing. Here are some images I've managed to find from around the web of last night's aurora! 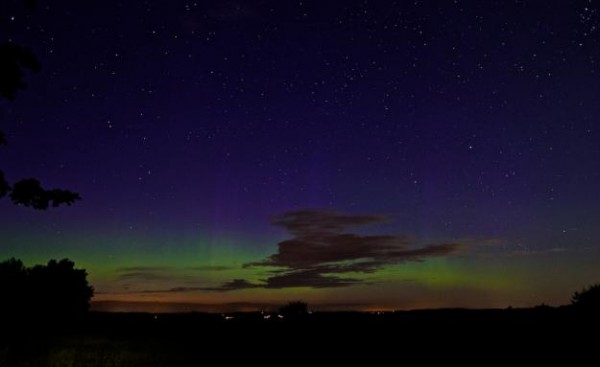 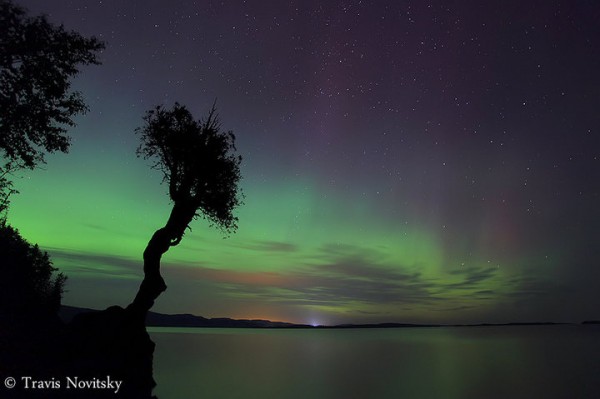 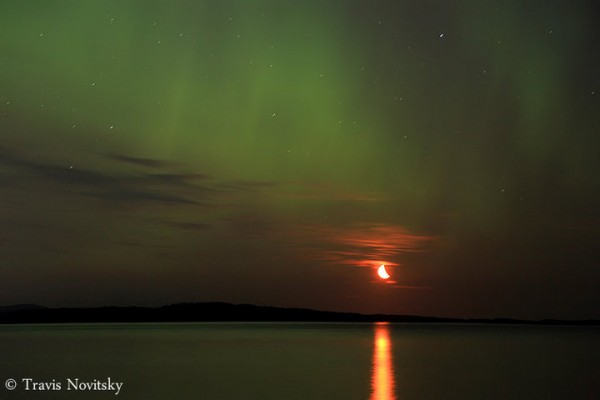 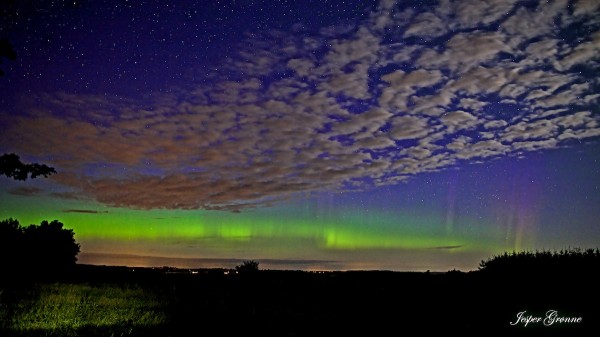 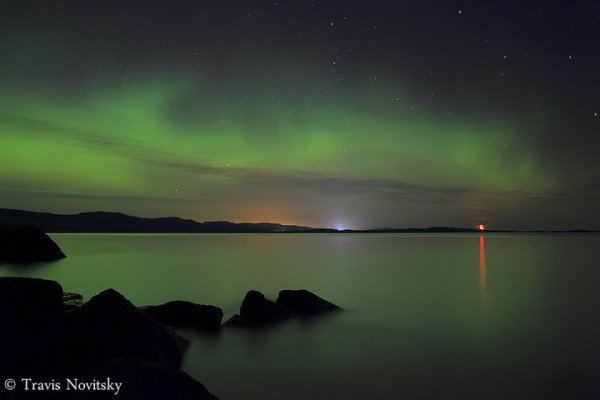 Why bring this up today, then, after-the-fact? Because coronal mass ejection often come in pairs, and the second one should hit us tonight! So if you've got the opportunity to get up near those northern high latitudes with clear skies, go for it! Do you have any idea of what it looks like over the span of a whole night?

This is the best chance you'll have for a while, and -- here's a personal confession -- you'll get to see something that I have never yet seen with my own eyes! So get out there and enjoy it, and I hope you appreciate all the wonderful things that had to happen to bring these northern lights to you!
Tags
Astronomy
Solar System

I think it's awesome you quoted an exchange between Skinner and Superintendent Chalmers! Those are some of my favorite parts of The Simpsons lore.

Great pictures. I was following this on my 3D sun iphone app :) Looks like the sun is getting out of it's minimum funk just in time for SDO (and soho and of course our dear STEREO)

Haha, this reminds me of when I was a kid in elementary school. Influenced by Dragonball Z and other cartoons, I created a character that was basically a fireball (there were other "elements" too) and his power move was Coronal Mass Ejection. No idea how I came upon the term and I had no idea that they caused the Northern Lights. Great pictures.

That Simpsons quote is my all-time favourite quote of the entire series!!!! Lol.

I live in Vancouver. We don't get the northern lights here. :( But my roommate is lucky enough to be in Saskatoon at the moment. She texted me yesterday, saying "You should be here! Apparently the northern lights will be out tonight!" ....This morning I woke up to another text: "I completely forgot to look outside last night." .....I could just kill her!!

From Seattle area, saw one brilliant white **FLASH** the it the whole sky, but nothing more.

Used to live in BC, and Northern Lights were frequent. I blame them on my body clock now being set to stay up till 3AM and sleep till noon! 8-)

My favorite sighting was like the folds of a huge green curtain across the sky, waving back and forth for nearly an hour; then it was as though a hand started pushing the curtain back from one side, making the lights narrower and narrower until *POP* they blinked out.

>From Seattle area, saw one brilliant white **FLASH** the it the whole sky, but nothing more.

Heh, that sounds more like a bolide or something. Or lightning! As far as I know aurorae don't do that.

The last big aurora hit here on a Halloween night--or rather, on a trick-or-treat night, which is typically 1-3 days earlier. I remember because I was taking kids door-to-door, and I saw at one point, in a neighborhood known for handing out huge amounts of candy, dozens of children standing in the streets and sidewalks, heads tilted back, eyes to the skies, watching what looked like the pouring of fluorescent paint over the entire dome of the sky. Reds, greens, some blues, dripping and oozing, shining brightly, the spectacle was enough to stop young children in their tracks and make them forget about full-sized candy bars, costumed friends, and silly pranks.

It was the best display I had ever seen--I remembered one earlier in midwinter of a previous year that was mostly glow-worm green and segregated to the north.

I think I'll take the dogs out now, and see what the skies hold in store.

The good news: We do have a light show up there. Mostly fairly boring, though, but a nice way to spend some time with the Cuttledaughter.

The better news: She remembers the Aurora Borealis from all those years ago on trick-or-treat night. And remembers it as being incredibly beautiful, which it was.

Wendy, if you mean Vancouver BC (and not Vancouver WA) which I'm assuming you do, you very well might have been able to see the lights last night (and tonight.) They made it pretty far south.

And the recent data plots (POES, not KP value) are here:
http://www.swpc.noaa.gov/pmap/Plots.html

Enjoy your aurora! Happy hunting from someone farther south, hoping for a boost in to a POES of 10 or 11!

Sorry, one more link for everyone in the US. This is from the Geographical Institute in Alaska, and it shows where the aurora should be viewable (hover-over text is city names) both overhead and on the horizon in accordance to their KP number.

And, y'know, if you're going outside and looking at the sky anyway, the perseids are out. I saw some lovely meteors last night when I wishfully aurora hunting.

God-damn urban light pollution... It's the one thing I really hate about living in the city. Grrrr!

I went out both nights but due to being a bit overcast in Saskatoon (52Â°N) I didn't see anything. :^(

*drool* I'm wishing I was in the south island of New Zealand now ... or somewhere out in the Nullarbor plains in Australia. I can thumb my nose at those folks in Tromso - they probably still have eternal daylight so they won't see anything.

I watch for these live everyday at http://www.electricquakes.org

what amazing pictures and explanation. I guess we all want to plan a trip to Alaska now.