And without sneering, teach the rest to sneer;

Willing to wound, and yet afraid to strike,

As you know, last weekend I was on vacation at a certain music festival, and of course, a good time was had by all. 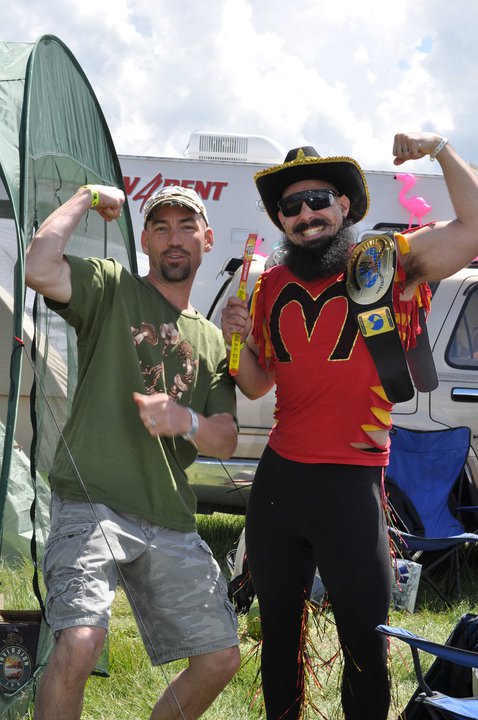 There were a huge number of great bands there with big names, like Death Cab for Cutie, Modest Mouse, The Flaming Lips, Wilco, and the band that I'll pick this week's song from, Foo Fighters and their hit, 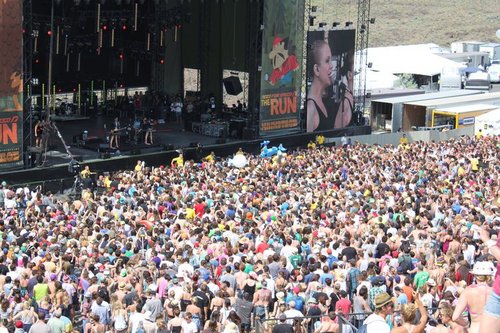 Rather than say moderately nice things about the bands that didn't really impress me, and halfheartedly damn them with faint praise, I'd rather simply tell you about the acts that were fabulous live, and that I'd definitely be excited to see again. 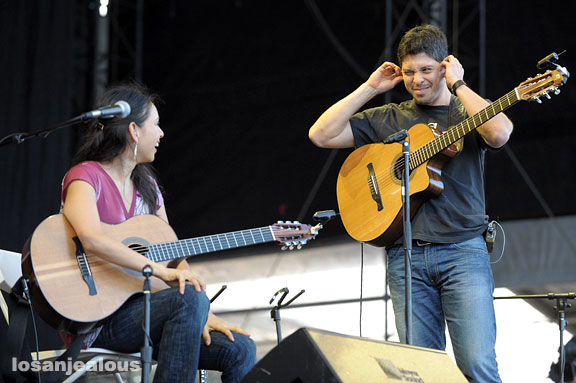 5. Rodrigo y Gabriela: this dynamic duo of guitarists -- who I've profiled before -- has gotten even better live since I last saw them three years ago. Playing melodies, harmonies, bass and percussion all with two guitars, Rodrigo and Gabriela have an amazing stage presence and are a joy to watch, which simply tops off the amazing sound they generate together. For anyone that's a fan of rock music and classical guitar, you owe it to yourself to catch these two. Honestly, it was made even better when Rodrigo announced that this was their first show in three months, because they were working on a new album but didn't have anything to perform from it, so they'd just be playing pieces from their first two albums. You could tell they were having a blast performing it, and I was glad I was there to see it. 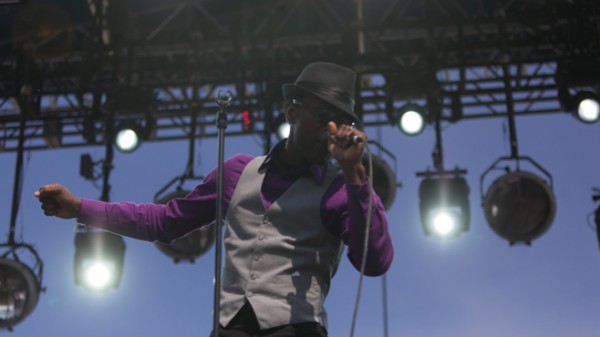 4. Aloe Blacc: this was my first time seeing him live. If you're a fan of Cee-lo Green and what he's doing musically, you owe it to yourself to check him out. He's talented, he's got an amazing stage presence, and he pays tribute to his biggest influences: Al Green, Marvin Gaye, Stevie Wonder, and James Brown. It takes something really special to make me want to get up and dance, but he had it in spades. For someone who had a timeslot at 3:45 in the afternoon, not even on the main stage, he was one of the biggest pleasant surprises for me of the whole festival. But I wasn't surprised by... 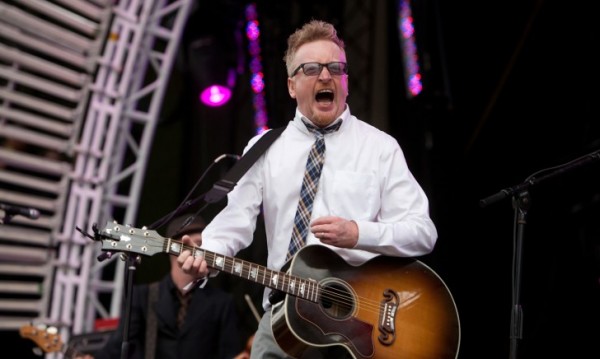 3. Flogging Molly: what an infectious energy this group had! Unlike some other bands that sound exactly like they do on their album, Flogging Molly really brings a unique sense of urgency and ferocity to their performance. I was very pleased to hear some material from this group that I had never heard before, and to feel my heart race in my chest as they played killer song after killer song. You know you're having a good time when you're smiling so much during a set that your cheeks hurt afterwards; you will find no faint praise for Flogging Molly from me. (Plus, I got to learn that "molly" is what the kids now call MDMA. I felt ancient referring to it as "X".) 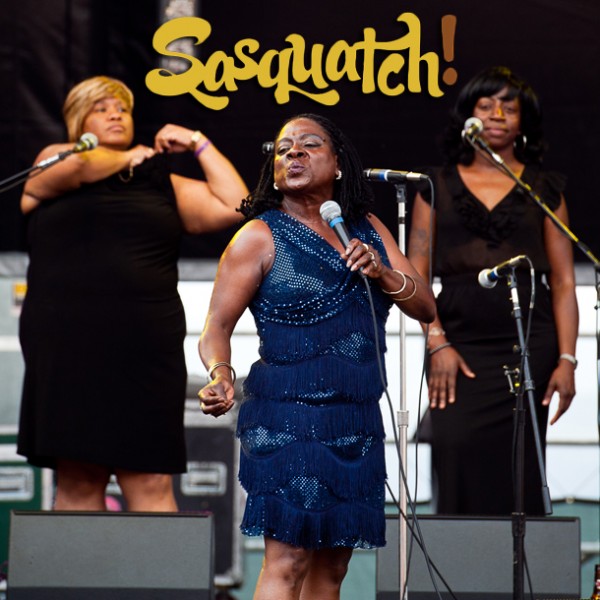 2. Sharon Jones and the Dap-Kings: I'm sorry, but if seeing Sharon Jones perform live doesn't get you up and moving, you might have to check your funk-meter, because you may be dead. This isn't the first time I've seen Sharon Jones and the Dap-Kings perform live, and I hope it isn't the last, because I simply did not want her set to end. She never let up the energy for a moment, and it was incredibly infectious. I found myself unable to not dance, and honestly felt bad for whoever it was who had to follow her. (It was Rodrigo and Gabriela, incidentally!) If you like funk, motown, or any of the old, amazing singers like Nina Simone, Billie Holliday, or Ella Fitzgerald, you owe it to yourself to see Sharon Jones live, and let her rock your world.

But the big winner for me was also the biggest surprise: 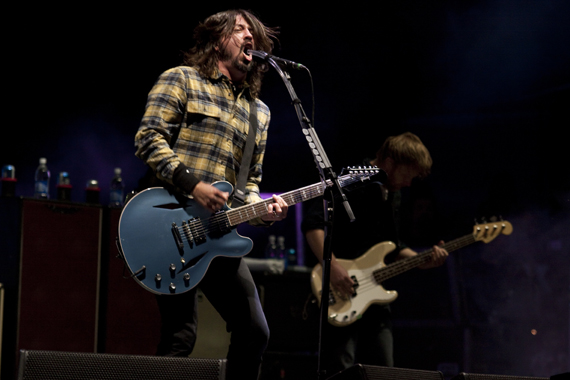 1. Foo Fighters: I had never been terribly impressed with their albums. I'm someone who thought that their first album was the best, that "I'll Stick Around" was the best song that they did, and then they came out with more "pop-lite" songs like Big Me, and then I stopped paying attention to them. I have, privately to many people, damned them with faint praise before. So I wasn't expecting much from them.

Was I ever in for a shock. They played "I'll Stick Around" for me, alright. Along with, like, eight other killer songs that I totally knew almost all the words to, like Learn to Fly, Times like These, Everlong, Best of You, All my Life, and My Hero. They jammed out every single track, and Dave Grohl played his heart out for the audience, like it would have been his greatest show ever, for the entire two hours. And I had my breath taken away by just about every track.

There will be no more faint praise for Foo Fighters from me, and no more unfair comparison with Dave Grohl's "other" band. 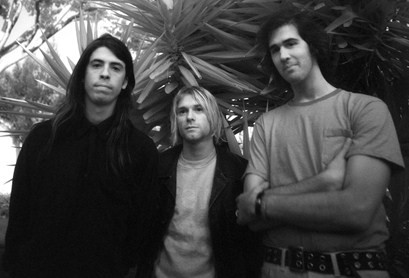 To anyone I've ever spoken to about Foo Fighters before, hear these words from me now:

They are fun, they are charming, they rock a lot harder than I expected them to, and they gave not only the best performance of the entire festival for me, they put on the best performance I've ever seen from a big-name, famous band. I would go see them again in a heartbeat live, and I would recommend that if you think of even one Foo Fighters song a little bit fondly, you will be extraordinarily happy to see them perform in concert. Dave Grohl and the Foo Fighters played their hearts out for me, and I am all the richer for it.

Honestly, I was kinda hoping I would bump into while I was there on Saturday, so I could compliment you on your blog in person. Alas, too many people there, and a 1 in 50,000 shot isn't that great.

Oh well, Sasquatch was a good time. And thanks for the awesome blog (weekend diversions or otherwise)!

You might want to check out the Foo Fighter's position on Aid denialism:

First show I ever saw was Flogging Molly, The Street Dogs, and The Briggs. Not coincidentally, it was also the best show I've seen so far. 500 people, all of whom were whipped into a frenzy. Love it!

"You know you're having a good time when you're smiling so much ... that your cheeks hurt afterwards"

Yeah, that used to happen to me, back in the day. But it was not music that caused it...

Great Blog, love to read it. Thanks for bringing balance into science.

Yeah, Flogging Molly is easily the greatest live band I've seen, and I've seen them 10 times now, 8 of which we were on the front row! :-D Never miss a show if they pass through. They're all quality people as well, who will come out and walk around the crowd, mingle with the fans, signing autographs, taking pics, etc. And if you can listen to their show and stand still, something is wrong with you...

Dave @ #2...thanks for the post about HIV denial.. absolutely crazy!

have to agree with you about the Foo Fighters. I have seen them play live at least five times. they always put on a great show and make it seem like they are having FUN! and REALLY want to be there performing for you.

the aids denial thing is troubling.

oh, the other band that i think gave the best performance i have ever seen was Crowded House, back in the mid 90's.

while i am at it, the worst performance i have ever seen is The Lemonheads. awful. awful. awful. plus Evan was a rude, dismissive, jerk to a young woman that wanted his autograph before the show.

Yeah, that article from 11 years ago is troubling.

Ethan (and everyone else too)

you ought to check out Minnesota Public Radios station, "The Current." it is streaming on the web. it is a member supported radio station (no commercials!). while driving home yesterday, i realized that a lot of the acts at the festival Ethan went to get played. if you liked that music, you'd probably like the station.

here is the link: