"What's in a name? That which we call a rose
By any other name would smell as sweet." -William Shakespeare

Up in the night sky, just a few degrees away from Orion, one of the most identifiable constellations in the winter sky, lies a cluster of newly formed stars. 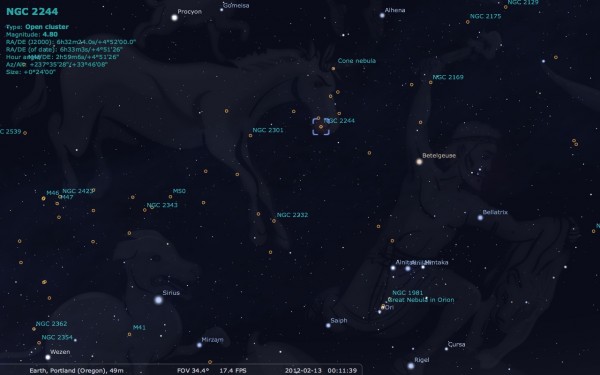 Image credit: Stellarium. As always, click on all images for the highest-res version available.

5,000 light years away, this cluster of stars is loaded with the full gamut of stellar colors, from blue to white to red, and is easily visible through any astronomical tool from simple hand-held binoculars to pretty much any type of telescope. It's one of the brightest, most prominent star clusters in the entire night sky not to make it into the first astronomical catalog of interesting night sky objects. 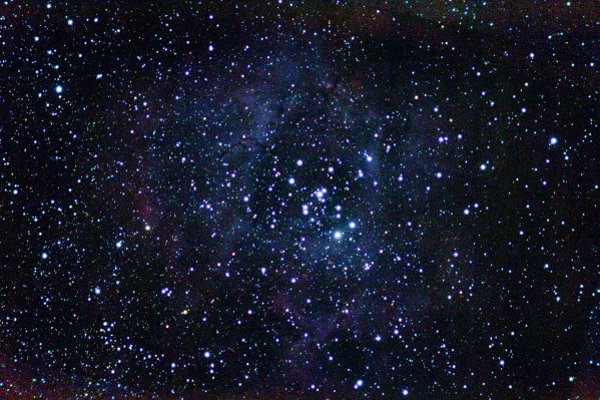 But young star clusters like this aren't all that rare, even within our own galaxy. But this one houses a surprise. With either extremely dark skies, a large, powerful, and low-magnification telescope, or a very long-exposure astrophotography project, you can see something extraordinary engulfing this star cluster. 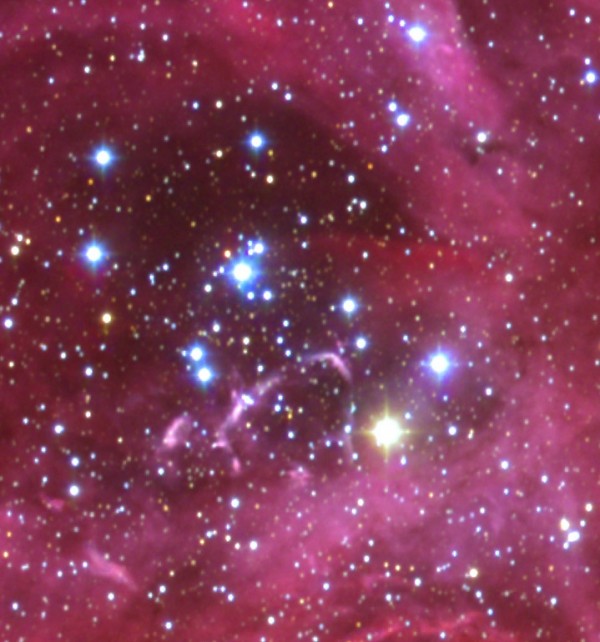 This dim, red glow is actually evidence of incredibly hot temperatures, but not for the reasons you might think! Unlike lava, which glows a dim red because of its very high temperature of over a thousand degrees, this glow is produced by temperatures much, much higher than that. In fact, regions in the core of this star cluster reach a temperature of over 6 million Kelvin, and the red color that you can see comes from a very special property of the hydrogen gas surrounding the cluster. 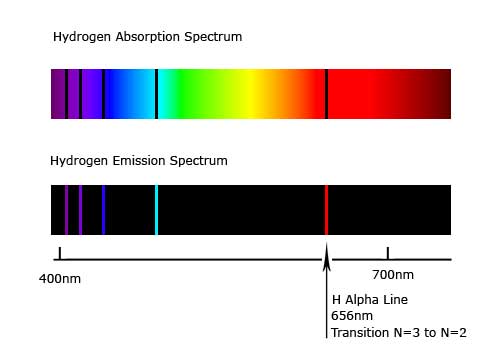 When this incredibly powerful radiation from the stars collides with a hydrogen atom, it kicks the atom's lone electron clear out of the nucleus, leaving just a proton behind. Eventually, another electron -- kicked off of some other hydrogen atom -- runs into our ionized nucleus, producing stable, neutral hydrogen and a cascade of infrared, visible, and ultraviolet light at well-defined frequencies.

The red color comes from the most powerful visible-light transition in hydrogen, and is the cause of this vast illumination of the interstellar medium. With temperatures this hot, you may wonder just how far this nebula extends, and the answer is a spectacular Valentine's Day treat. 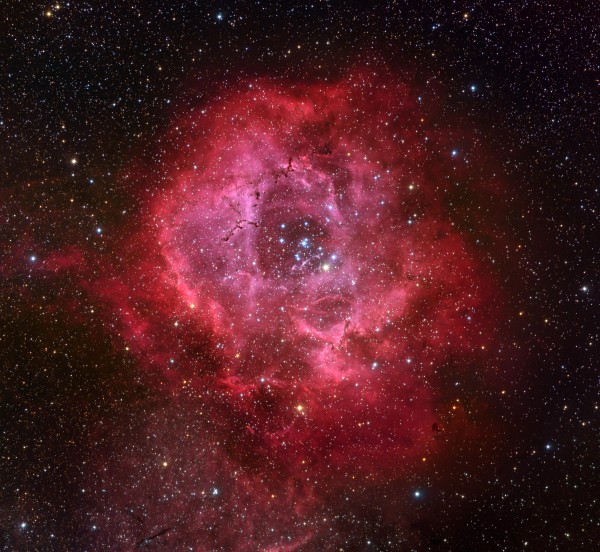 Spanning an amazing 130 light years in diameter, the Rosette Nebula is one of the largest, most symmetric emission nebulae in the entire galaxy.

Looking at it, you may wonder how it got to be this way, and why it's the shape and size that it is. It turns out that our galaxy, in addition to the stars, planets, and dust that you know about, is also littered with huge, diffuse, cold and (often) fast-moving clouds of gas.

Most of the time, these clouds of gas are quite content to zip along without causing any sort of fracas, but every so often, something -- perhaps a nearby supernova, or a collision with another gas cloud -- starts this cold cloud on its way towards gravitational collapse. While this happens, the densest regions start accruing the most matter the fastest, and that's where new stars first form! We can learn about the newest stars by looking in the X-ray portion of the spectrum. 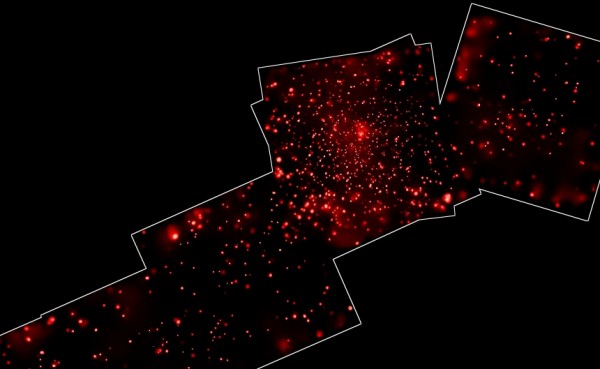 What we find is that not only is the core of this nebula the hottest, containing the youngest, most massive stars, but that's also the oldest part of the nebula, and the place where star formation, although ongoing, was triggered the earliest. In other words, even though stars are forming everywhere, while the hydrogen gas slowly condenses into stars in the densest locations and evaporates in the most diffuse, star formation started at the center and slowly, over hundreds of thousands to millions of years, worked its way outward!

If we look in the far infrared part of the spectrum, we can see this in action. 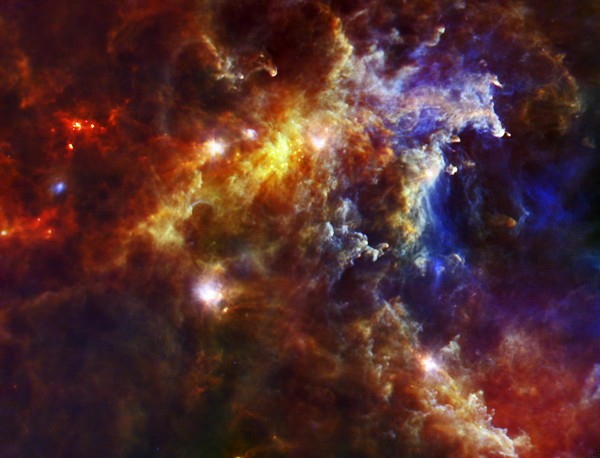 This image of gas -- taken by the Herschel Space Telescope -- on the outskirts of the Rosette Nebula shows massive stars up to ten times the mass of our Sun forming in the brightest regions here, while stars only a fraction of our Sun's mass form in the central, smallest pockets of dust.

If we go back to a section of the original, visible light image, we can see where that dust is densest, from its light-blocking properties, as well as where its evaporating the fastest, right around the edges of those dusty regions. 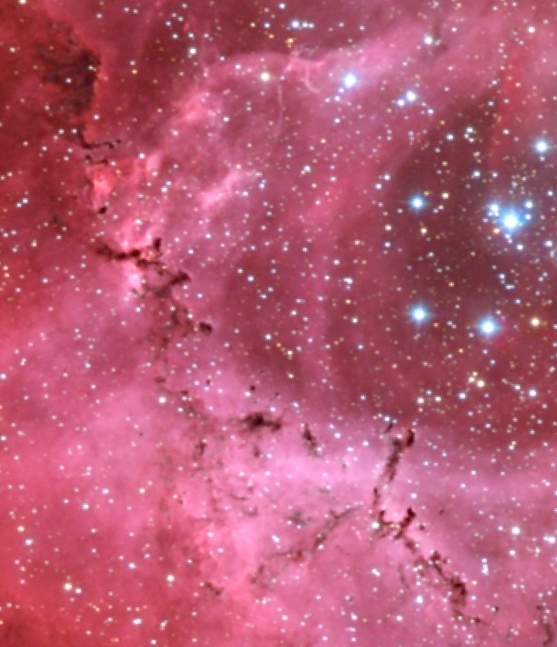 This NOAO image, although impressively detailed, doesn't quite have either the highest resolution or the most information possible in there. Because it's confined to "true color," we can't really learn what elements are present in this nebula. But by looking in false color, where different colors correspond to different elements, we can see that there's actually a rich diversity of different types of elements here. 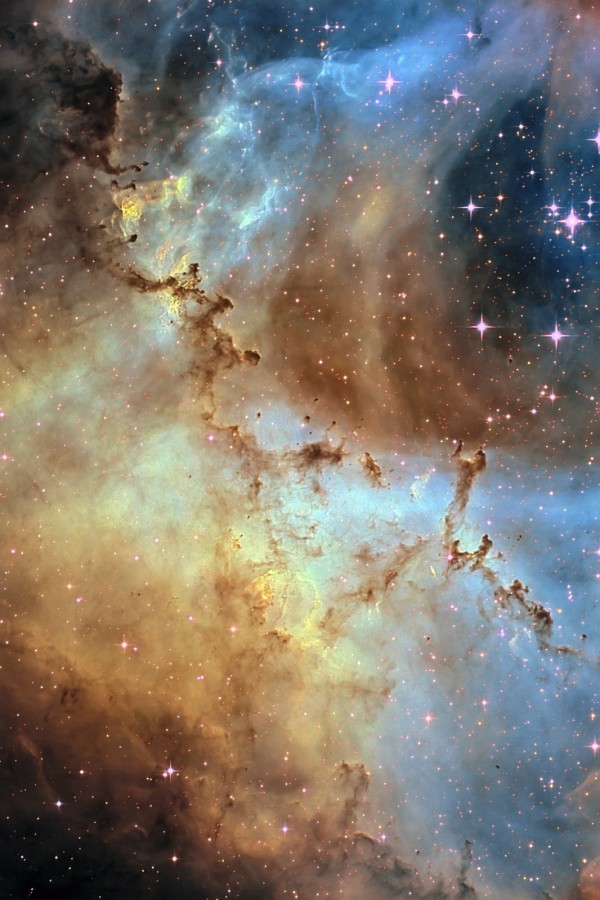 In this image, the color red corresponds to the element Sulfur, prominent in the atmospheres of all the bright, young, visible stars. The familiar Hydrogen is shown in green, while the bluish regions are dominated by Oxygen. As you can see, even though there's the red glow of hydrogen everywhere, many regions are dominated by a diversity of elements!

But what about resolution? Believe it or not, there was a survey designed to probe deep inside these regions! Known as the Isaac Newton Telescope Photometric Hα Survey of the Northern Galactic Plane, this very region of the Rosette Nebula was imaged at an unbelievably high resolution. (If you're only going to click and explore one image on this page, make it the one below!) 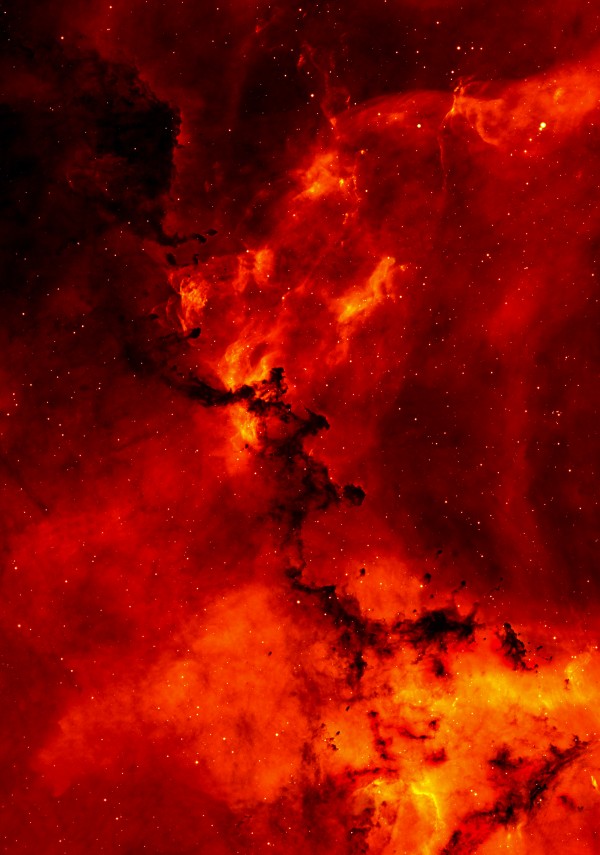 While massive stars continue to form and grow in these dusty, stellar nurseries, the winds from the ultra-hot central stars compete to blow the remaining dust away, stunting their growth and preventing them from reaching the sizes of the greatest central monstrosities, which can be many dozens of times the mass of our Sun, and have lifetimes of under a million years!

This image is at such high resolution that I can zoom in to this small of a region (can you find it, above) and still see this level of detail: 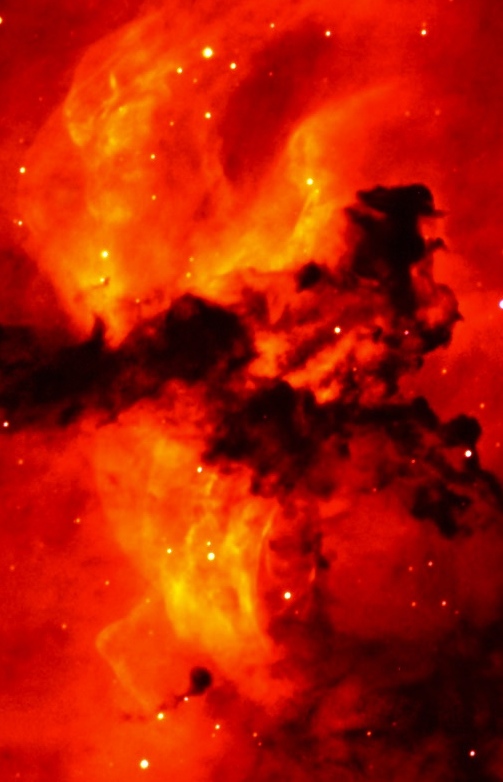 But what about zooming out, even farther than before, and viewing the entire cosmic rose in all of its glory? Here at Starts With A Bang, this is my Valentine's Day gift to all of you, in time to send it to your favorite person in the galaxy. 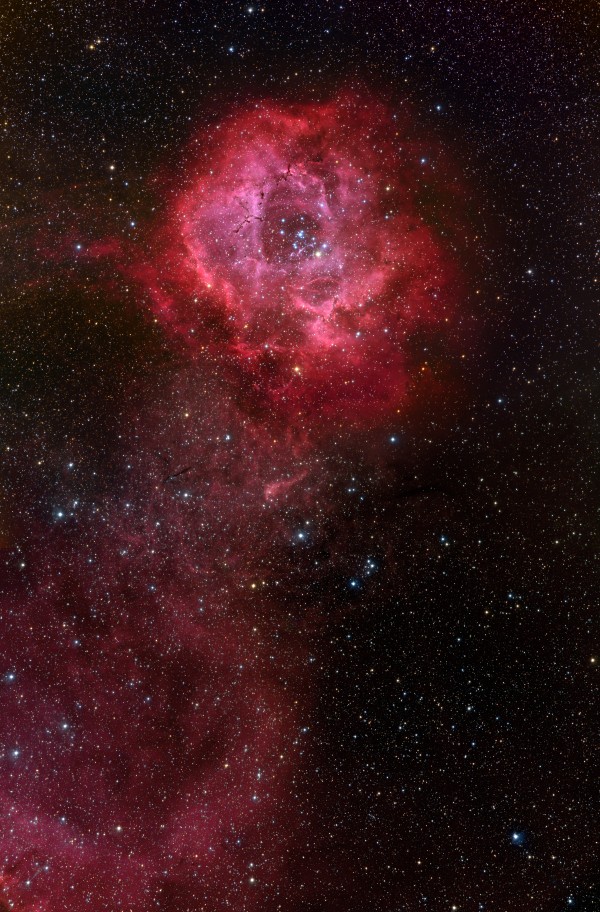 Happy Valentines Day, from the biggest Valentine in the galaxy!

And I wondered what to give my wife for Valentine's.

The Heart Nebula is pretty awesome as well!
http://apod.nasa.gov/apod/ap061003.html