Messier Monday: A Galactic Sliver in the Big Dipper, M108

"Most writers spend their lives standing a little apart from the crowd, watching and listening and hoping to catch that tiny hint of despair, that sliver of malice, that makes them think, 'Aha, here is the story.'" -Ayelet Waldman

Welcome back again to another Messier Monday, where we're all set to take an in-depth look at one of the 110 deep-sky wonders that make up the Messier catalogue. Looking at the nearby stellar remnants, star-forming regions and young star clusters, as well as the more distant and larger globular clusters, the most common of all the Messier objects are also the most distant: the galaxies beyond our own Milky Way, of which there are 40 in the Messier catalogue. 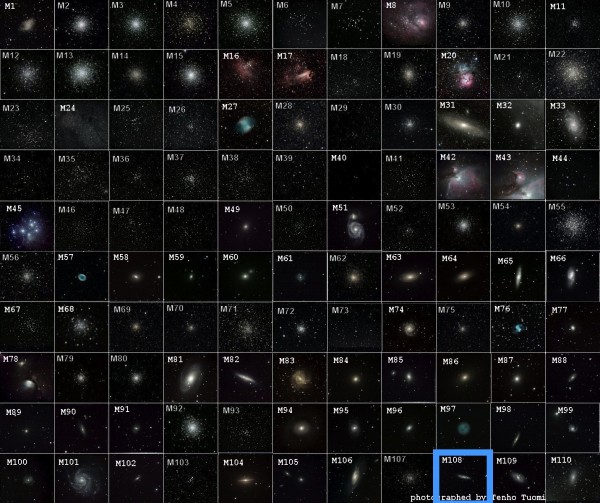 In honor of today, which marks our 40th consecutive Messier Monday together, let's take a look at one of the last of these 40 galaxies: one that's visible from the Northern hemisphere all-year-round, Messier 108, a galactic sliver from within the Big Dipper. To find it, start by locating the Big Dipper -- perhaps the most famous collection of seven bright stars -- in the night sky. 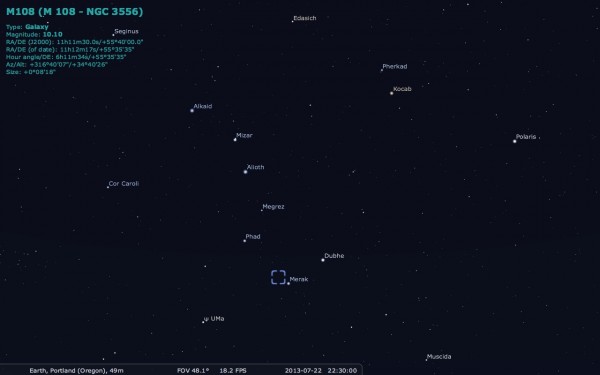 There are four stars that make up the "cup" of the dipper: Merak is the star at the bottom of the cup farthest from the handle, and the key to finding this object. If you backtrack towards the other end of the cup about 1.5 degrees, you should see a faint, fuzzy line in the sky through good binoculars or a small telescope; that's Messier 108. (And if you hit the spherical Owl Nebula, you've gone too far!) 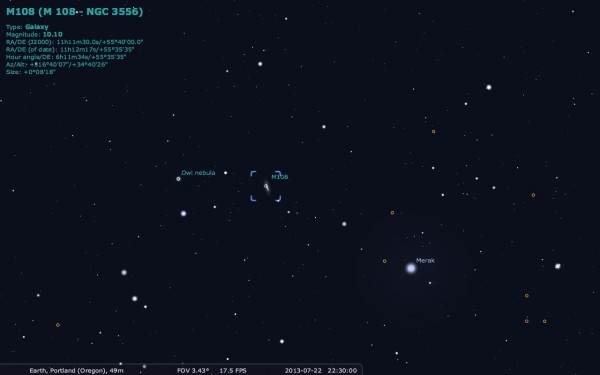 This object, like all of the Messier objects numbered 104 or higher, was added to the catalogue much later, when handwritten notes about a number of other deep-sky objects that Messier (and his assistant, Méchain) had observed, catalogued, described and accurately located in the sky were uncovered. But he definitely knew about it, and even though it's faint, you can star-hop to it by locating the magnitude-6, orange star near Merak, HIP 54314, and traveling about the same distance again away from Merak. 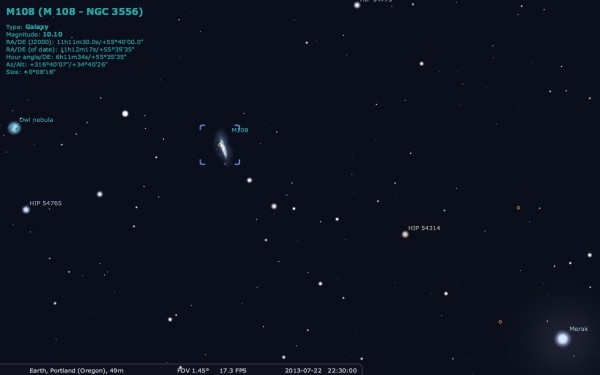 Unlike this image, you may want to make sure Merak is out-of-view of your optics, as a star that bright can be a significant source of light-pollution for seeing a faint, extended object like this. And if you can, a view of a nearly-edge-on, barred spiral galaxy -- M108 -- will be your reward! 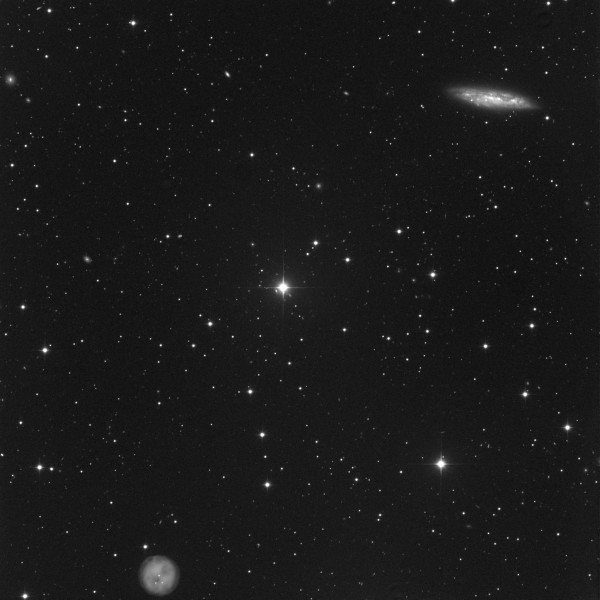 Located less than one degree away from the Owl Nebula (Messier 97), both objects can be viewed at once through most telescopes at relatively low magnifications. Although the above is what you'll likely see with your naked eye, these objects actually have spectacular colors associated with them, which the appropriate astrophotography techniques can bring out. 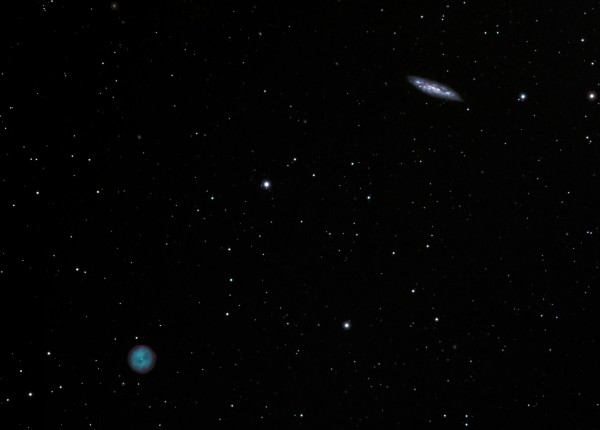 Despite their proximity in the sky, the Owl Nebula is a dead, single star just a few thousand light-years away from within our own galaxy, while Messier 108 is some 45 million light years away, and one of the largest, brightest members of the Ursa Major Cluster, a cluster of galaxies many times the size of our local group. In fact, Messier 108 and the rest of this galaxy cluster are probably gravitationally bound to the Virgo Cluster, which is about three times brighter and twenty times as massive as this smaller galaxy cluster.

But that's all just context for where this galaxy is. What about the object itself? 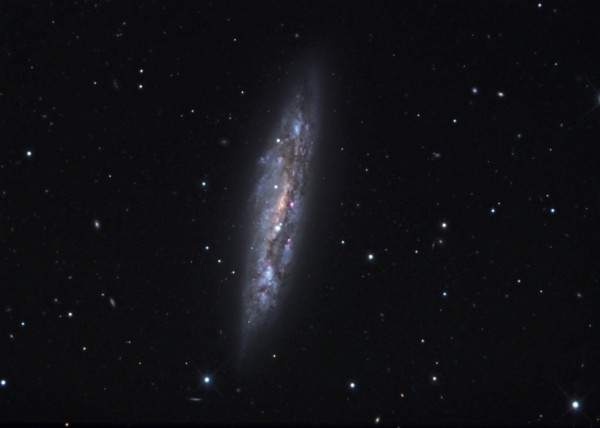 Inclined at about 75° to our line-of-sight, this galaxy has about 125 billion solar masses in there, making it about 1/3-to-1/2 as massive as our Milky Way. It's also about the same diameter as our Milky Way: about 100,000 light-years in diameter. Despite its low-mass relative to ours, there's a supermassive black hole in there that's 24 million times the mass of our Sun, or some six-to-eight times as large as our supermassive black hole! That's information we learned from data taken with the Chandra X-ray telescope, thanks to this work. 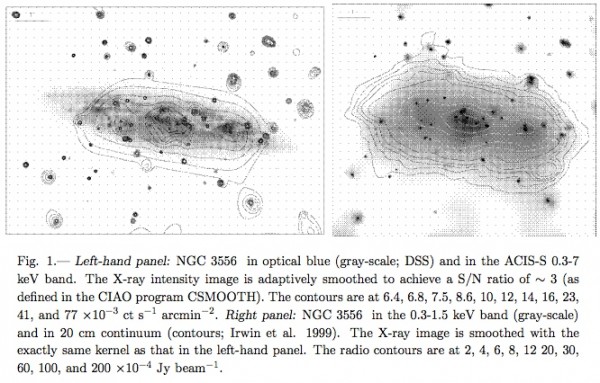 We can always learn some spectacular things by looking in different wavelengths, and the X-ray is just one example. From the visible light, including the neutral hydrogen, we can find that there are shells of expanding, neutral hydrogen gas (known as HI supershells) many thousands of light-years long, being pushed out from the center of this galaxy. (They're not clearly visible in these images, but trust me, the data indicates they're there.) 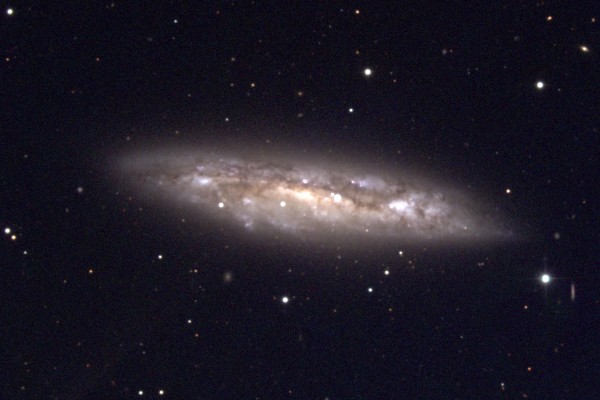 There are star-forming regions in here (one of which was home to a Type-II supernova in 1969), loosely-wound spiral arms, and a large central bar, all seen in visible light. 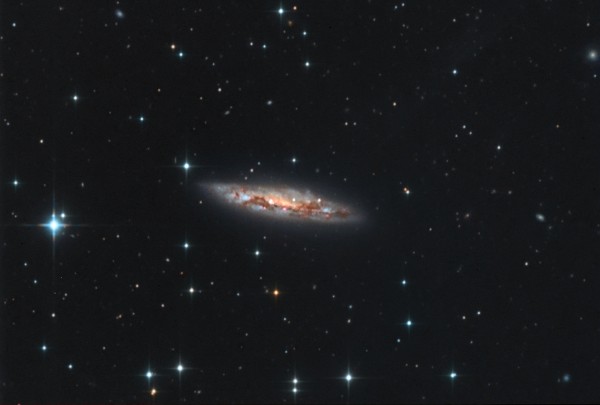 If we head on into the infrared, courtesy of 2MASS, we can see the warm dust responsible for blocking the visible light. As you can see, it's smoothly distributed in a disk-shape, and both the bar and the hot, dusty star clusters (in blue, above in the visible) are prominent in the infrared. 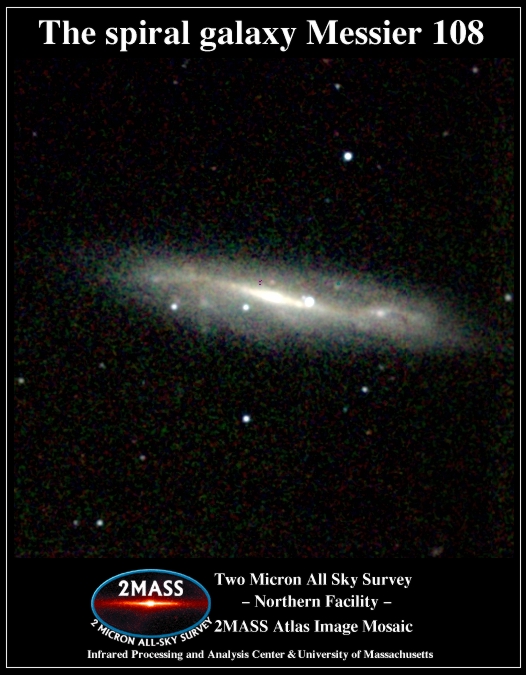 There's an ultraviolet image available, courtesy of GALEX, which shows off the hottest, youngest (bluest) stars, but the image is pretty low-resolution, unfortunately. 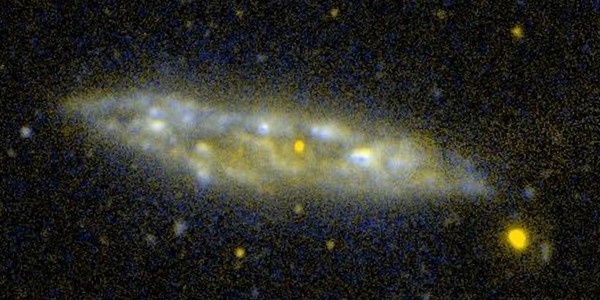 But in 1994, Hubble -- back with its old WFPC2 camera -- decided to image a small part of this galaxy, to see what it could turn up. Overlayed on the GALEX image, here's where it looked. 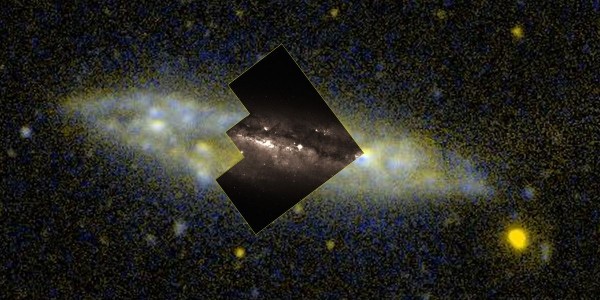 As always, with Hubble, the resolution it gets is spectacular, even when imaging an object millions of light-years away! 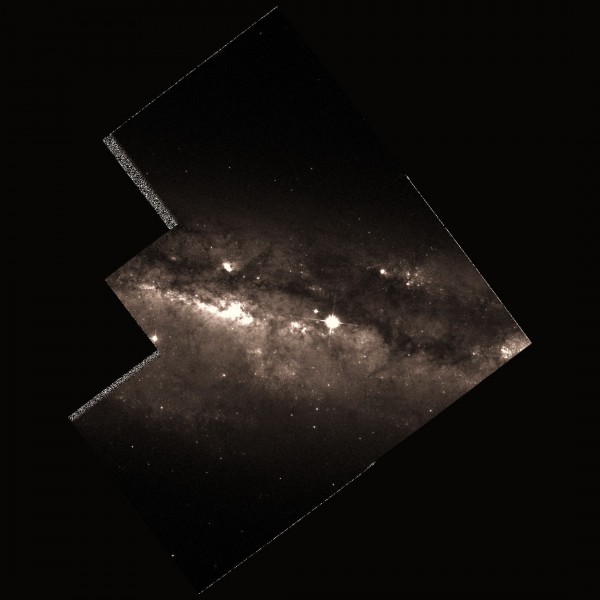 To really get in there, I've rotated, cropped, and presented you with a full-resolution snippet of the inside of this galaxy. It never ceases to amaze me that -- out beyond the few foreground stars our own galaxy supplies -- we can actually make out individual stars in a galaxy millions of light-years away!

And just for comparison with another galaxy, doesn't an image like this make you so glad for all the upgrades we performed on the Hubble Space Telescope? There's an amazing Universe out there, and it's up to us to keep learning all we can about it!

That’s all the time, information and pictures we have for another Messier Monday! Including today’s entry, we’ve taken a look at the following Messier objects:

Thanks for joining me, and here's hoping you continue to share in our quest to learn just a little bit more about what's out there, and by doing so, to understand a little bit better the great cosmic story that binds us all together.

Am definitely gonna try and and find this one.