It's time for another Messier Monday, where each week, one of the 110 deep-sky objects that make up the famed Messier Catalogue -- the first large, accurate catalogue of non-cometary objects -- gets an in-depth treatment. These objects are not only a good representation of the brightest deep-sky objects visible from Earth, they're a good sample of the different types of objects visible from any random location in the Universe! They include nebulae, stellar corpses, newly formed star clusters, ancient globular clusters, and galaxies far beyond our own. 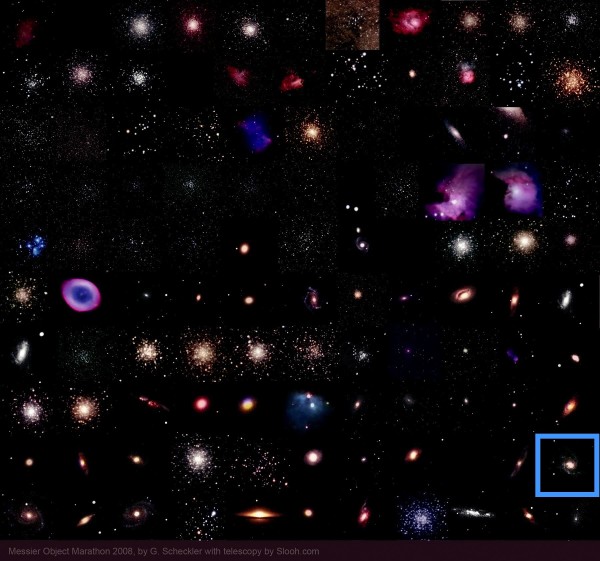 These objects aren't evenly distributed throughout the sky, however. Star clusters abound in the galactic plane, star-forming nebulae are clustered together in just a few regions of the sky, and galaxies are found grouped together under the cosmic influence of gravity. The largest of all such galactic groups nearby -- very well-represented in the Messier catalogue with 15 members -- is the Virgo Cluster. We've still got another month-or-so of these galaxies being visible in the early part of the night before they disappear for a while, so let's take a look at one of the more spectacular galaxies in there, Messier 99. 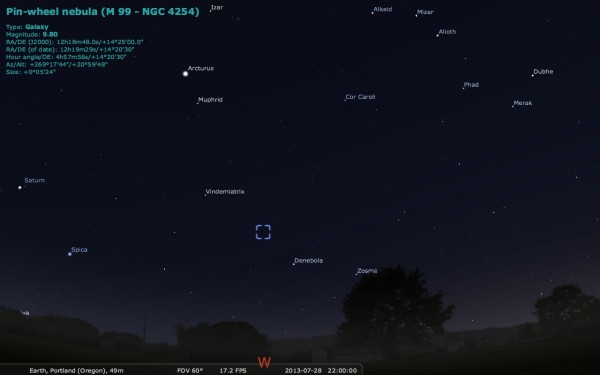 If you follow the arc of the Big Dipper's handle, you'll come to the orange giant, Arcturus, and if you speed on a little farther, you'll wind up at the bright blue Spica. To the west of those very bright stars, you'll see a row of three prominent stars led by Vindemiatrix at the top (the brightest of the three), with Denebola a little farther to the west than those. The Virgo Cluster is a vast complex in that region, with many different sub-groups. To find Messier 99, you can get some help by looking at the region directly between Vindemiatrix and Denebola. 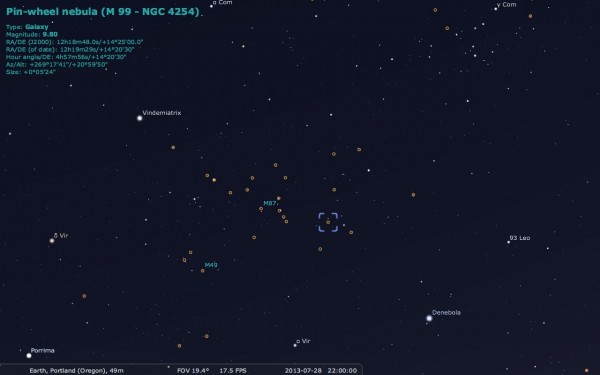 One of the western-most bright galaxies in the Virgo Cluster, Messier 99 heralds the N-cloud of Virgo, and has a few special distinctions. But if you want to know how to find it among the sea of other galaxies, look for the white naked-eye star 6 Comae Berenices, slightly closer to Denebola than Vindemiatrix and just slightly north of the imaginary line connecting them. Just a single degree back to the east -- and immediately below the Hipparcos star HIP 60089 -- you'll see the second galaxy ever classified as a spiral (after M51), Messier 99, the Pinwheel Nebula in Virgo. 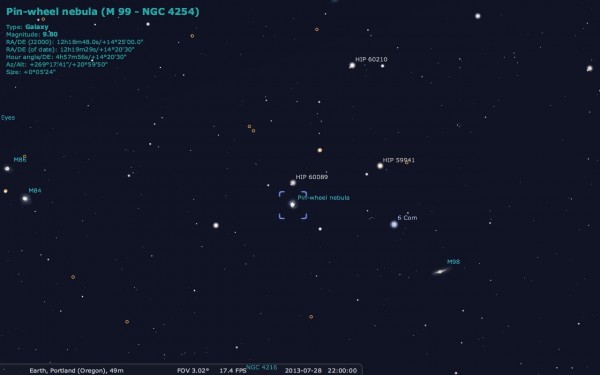 Seen nearly completely face-on, this galaxy is completely unbarred, and has two giant spiral arms: a normal-looking one, and a distorted one that's far extended compared to the other. Even small telescopes with decent astrophotography techniques can bring this out easily. 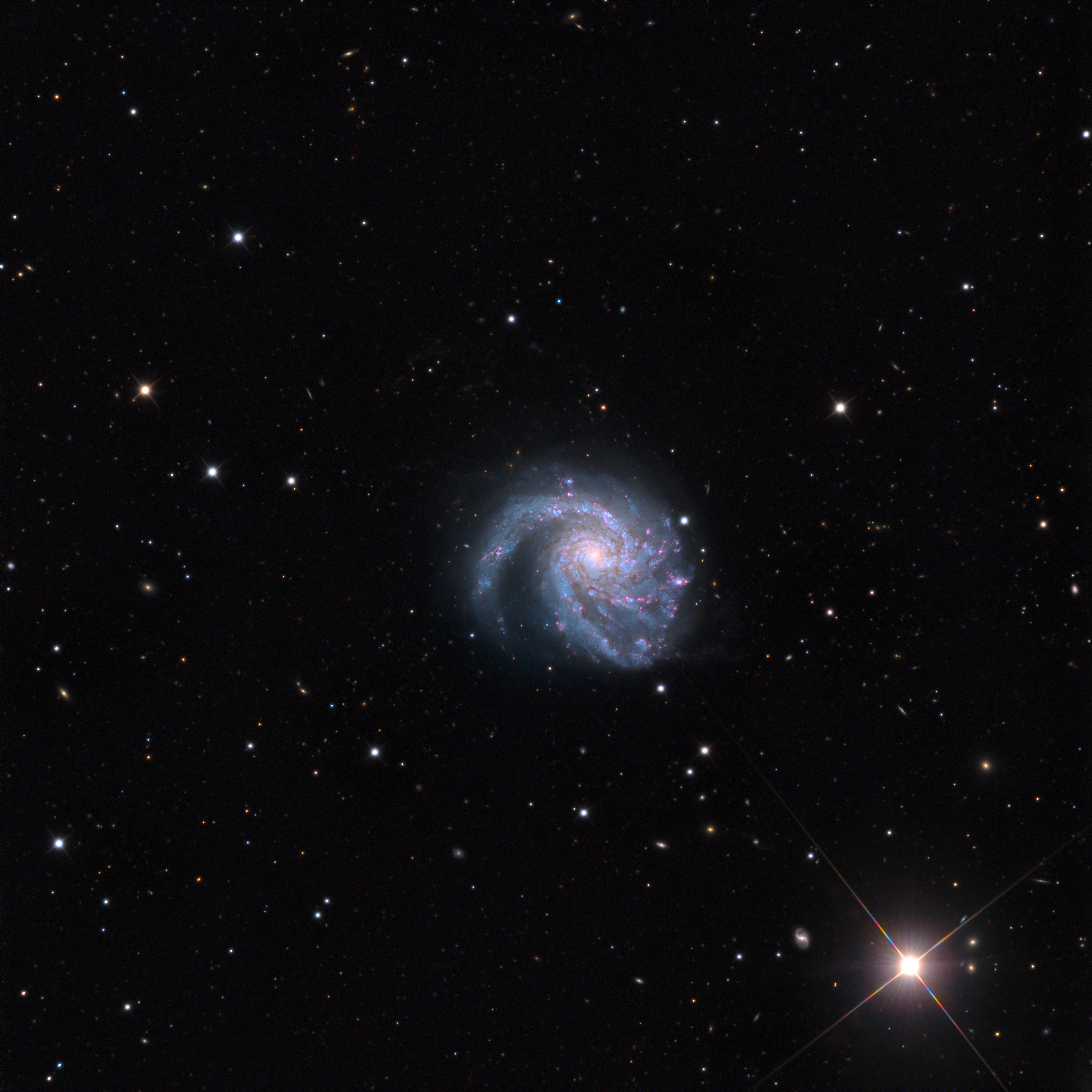 This galaxy is remarkable for a number of reasons. First off, it's the brightest member of its subcluster in Virgo, outshining the much larger (but nearly edge-on) Messier 98. 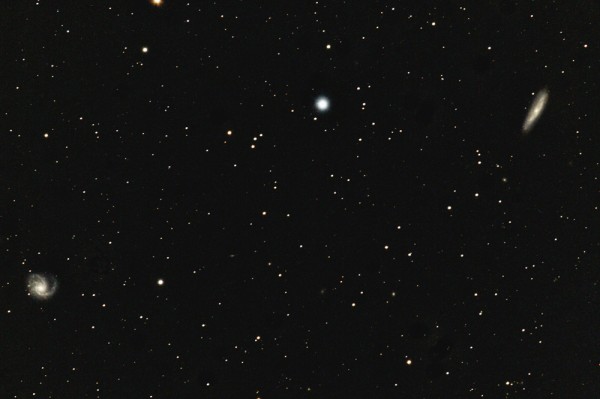 As far as a galaxy this bright goes, it's actually pretty small: just 50 billion solar masses make up this spiral, making it only about 5% as massive as the Milky Way. Despite this small size, it's pretty large in extent: 80,000 light-years in diameter, or nearly the diameter of our own galaxy! 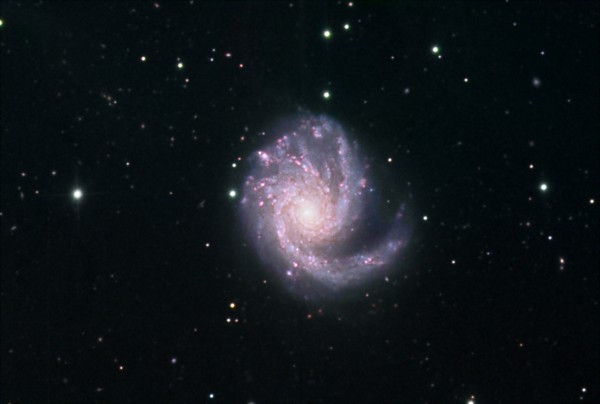 The speculation is that the reason this galaxy appears so extended for its low mass is because it's undergoing a gravitational interaction. There are some hints for this other than the goofy-looking arm that's separated from the rest of the galaxy. Let's take a look. 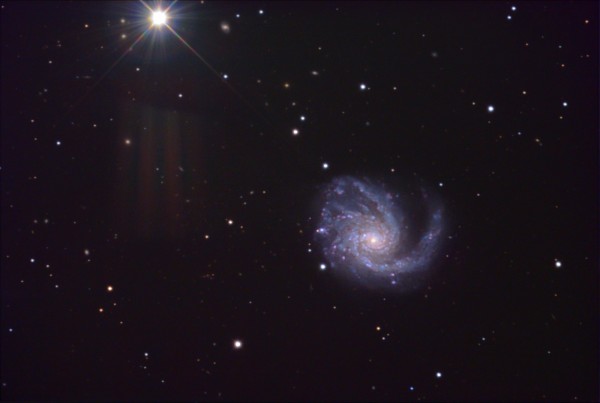 For one, this galaxy is unusually pink, indicative of newly star-forming regions. It's got three times the star-formation rate of a standard, quiet, Milky Way-like galaxy, which is evidence that there has been some sort of gravitational interaction. There are a couple of reasonable speculations. 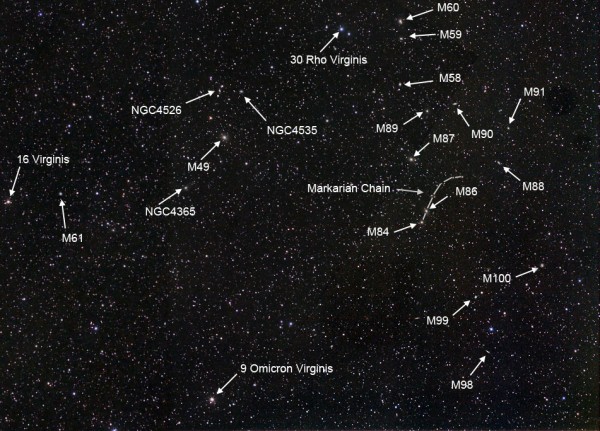 One is that Messier 99 is falling into the Virgo Cluster for the first time, and this gravitational (and electromagnetic from ram-pressure-stripping, as it runs into matter) interaction -- as it speeds through the intracluster medium -- is what's causing this rapid burst of star formation as well as the distended arm. There's some circumstantial evidence for this, as Messier 99 is one of the most redshifted of all Messier objects, moving away from us at 2407 km/s, or nearly 1% the speed-of-light! This is twice as fast as most other members of the Virgo Cluster. 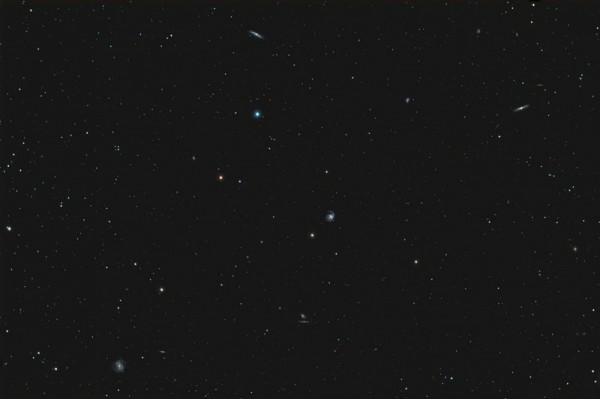 Another is that Messier 99 is gravitationally interacting with the nearby, more massive Messier 98, with some circumstantial evidence for that coming from the fact that Messier 98's redshift is about 1,400 km/s smaller than it's supposed to be, meaning that it's even blueshifted (like another Virgo Cluster galaxy we've looked at). 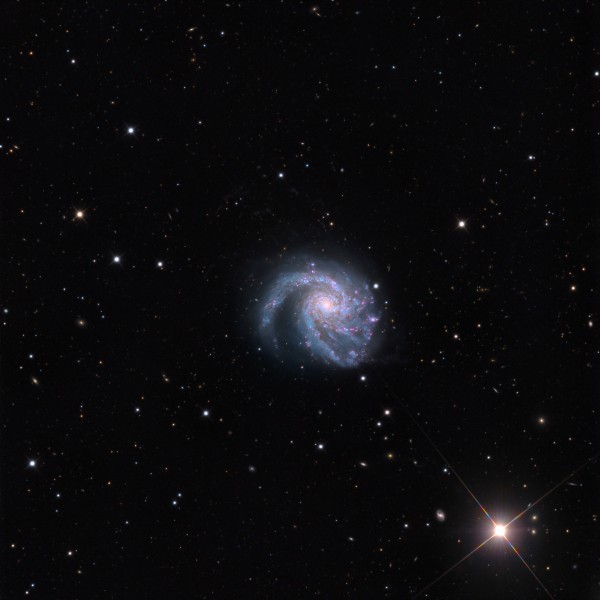 Some observers report a third arm, but a closer inspection shows that these are just wispy filaments peeling off of one of the two main arms. Zooming in to Adam Block's image, above, reveals this in spectacular detail. 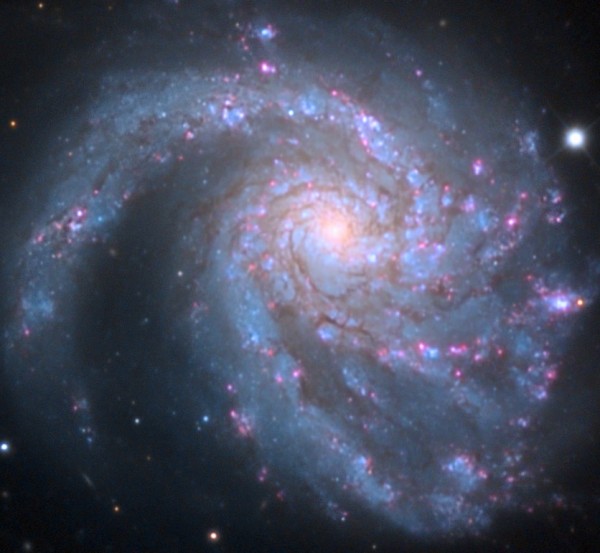 The dust lanes, the star-forming regions, and the hot, young blue stars you're used to in a spiral galaxy like this are all present, as is the yellowish central bulge.

But perhaps the most spectacular image of Messier 99 available came from an amateur scanning through the Hubble archives as part of Hubble's hidden treasures contest from last year. The Hubble data itself came from 2010, and the image is spectacular. 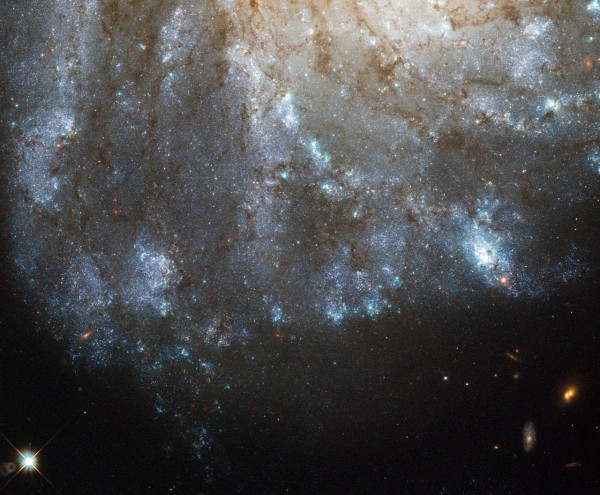 There's so much to be seen here: background galaxies, a few new star clusters, some dust lanes, and a variety of colorful stars. But there's one really weird feature that your eyes just might skip over. Take a look at the top-left of this image, and notice the bright yellow/orange star up there. Here, I'll point it out for you in higher resolution. 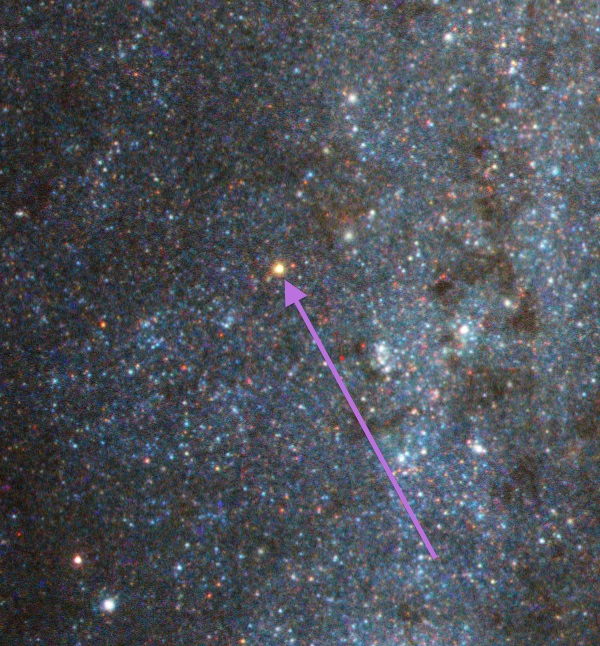 This star wasn't always there; instead, it brightened by a large amount very briefly, and then faded. Here's the weird thing: it's brighter than any nova we've ever discovered, and yet dimmer than any supernova we've ever seen! What is it? A star that gobbled up a giant planet? A supernova impostor? At this point, the jury is still out.

In the meantime, the highest-contrast views can be seen at the very edge of this galaxy, so that's where I've rotated and cropped the highest-resolution version of this image to give you a spectacular view of this island Universe located 50 million light-years away! In particular, the star colors are simply out-of-this-world.

There's no topping that, so that'll have to be the end of today's Messier Monday! Including today’s entry, we’ve taken a look at the following Messier objects:

Enjoy the Virgo galaxies while you can; they'll disappear for a couple of months starting at the end of August, and then reappear in the eastern skies as winter approaches. Until then, we'll be highlighting so many of the other deep-sky wonders in the Messier Catalogue, only here, only on Messier Mondays!

At first I thought the Messier Monday idea was a bit boring, but now it's becoming the highlight of the blog in my opinion. Stunning photos, keep up the great work, Ethan!

Thanks for this ,Ethan Siegel. Superluminous (beyond merely brilliant) article - and series - here. Very much appreciated and shared.

"any random location in Universe"? Wouldn't most random locations be far from galaxies so that would be all that you could see? Hmm, what would the night sky look like if you removed the Milky way and all it's stars...