What games did you play with your imagination as a little kid? Did you make up stories involving muppets? Horses? Cartoon characters? Cowboys and... native americans? Or, as the Hoosiers would sing,

Well, if ever any of that amused you, have I got a discovery for you. 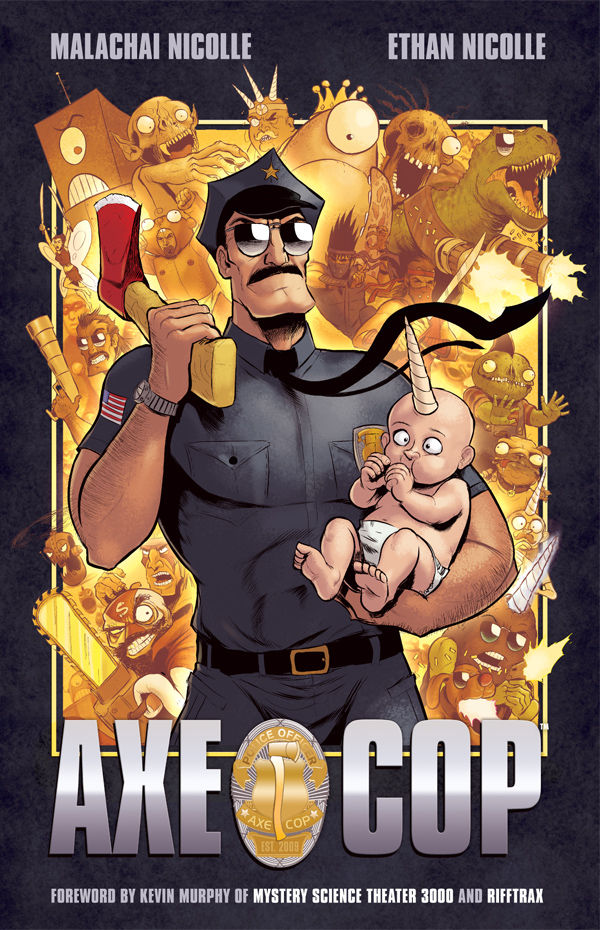 A cartoon created, literally, by the imagination of a (then) five-year-old! When Ethan Nicolle, an animator/graphic artist in his late 20s, went to his parents house in 2009 to visit his little brother Malachai, the following ensued:

I visited [Malachai] for a week during Christmas, and he was playing with a toy axe. He always wants me to play with him, and he usually wants to play dinosaurs, but he comes up to me with the axe and says, “Do you want to play Axe Cop?” And I say, “You have no idea how genius that is.” So I ask if I can be a cop, and he says sure, and comes out with this recorder. So I say, “Flute Cop? I don’t want to be Flute Cop.” So he trades with me, because he doesn’t care. So we’re Axe Cop and Flute Cop, and I say, “What are we going to do?” And he says, “Sign up here, we’re gonna fight dinosaurs.” So I said, let’s go cut their heads off. And I go, “Oh, now I’ve got blood all over me,” because a guy my age thinks it’s funny for blood to squirt everywhere. But then he says, “I got it on me too, and I turned into a dinosaur soldier!”

By the time we got to that point, I realized that if I were to draw this out like an old school comic and take it totally seriously, it would just be so funny. I figured I was just being partial, though — I drew the comic for my family so I never really expected to share it. But I posted it online on my Facebook, and my friends thought it was funny, so I asked [Malachai] what would happen next. He had a friend over that had a telescope, so suddenly we had Telescope Gun Cop. I just started quizzing him on what happens next in the story, and then I translated it onto the page. 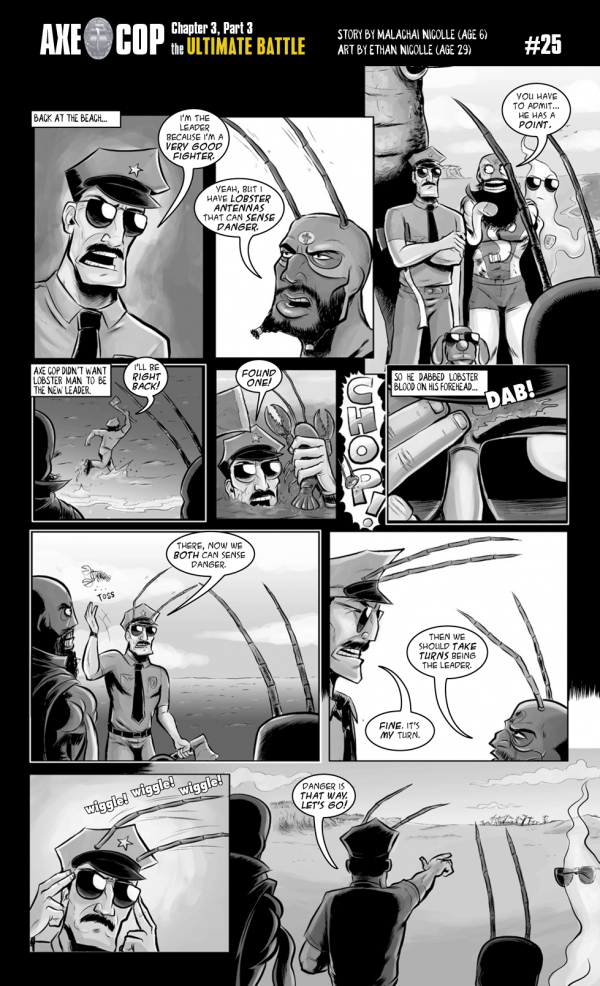 With a number of hilarious tropes worked in, including the ability to gain the special power of any other creature or thing simply by getting its blood on you or touching it, Axe Cop is a magnet for good guy heroes who want to join up and defeat evil in all its forms.

But how is it made? 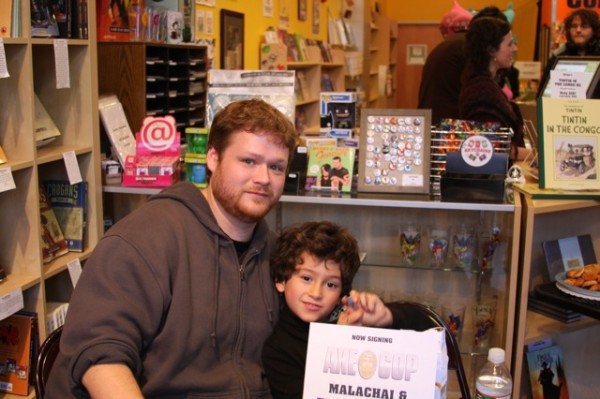 Image credit: Ethan & Malachai Nicolle, taken from one of the many conventions they star at.

Long story short, Malachai, Ethan's brother who's 24 years his junior, is the creative force behind Axe Cop. Any time they don't know what Axe Cop would do, or how he'd get out of a jam, or what a character would do, or anything at all, they just ask Malachai, who tells them immediately, and with a straight face. Allies, other heroes, and powerful secondary characters are plentiful. But there's only one Axe Cop.

The webcomic was so well received that it spawned a secondary comic which is arguably even better: Ask Axe Cop. 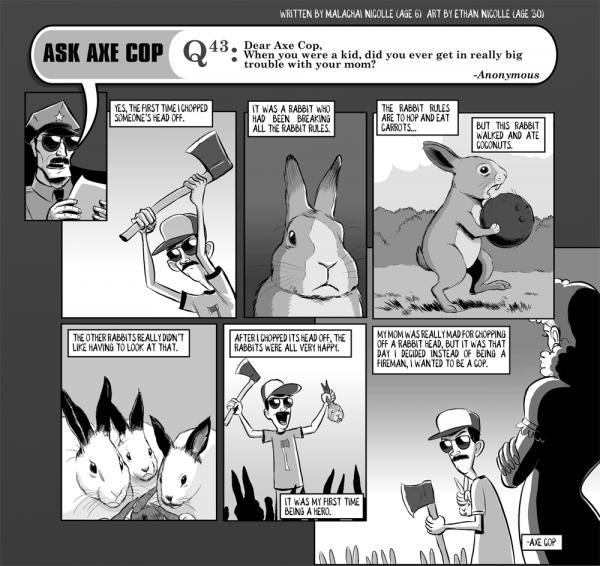 As you probably guessed, Axe Cop's preferred method of attack is to chop off the heads of his enemies, but the depths of axe cop's brilliance go far beyond that. Even though this has been around for more than three years now, I've only just discovered it. And it's so simultaneously absurd and clever, playing by its own logical semi-rules, that I don't think it's too early to say that I love Axe Cop.

He even fought Chuck Norris, once. 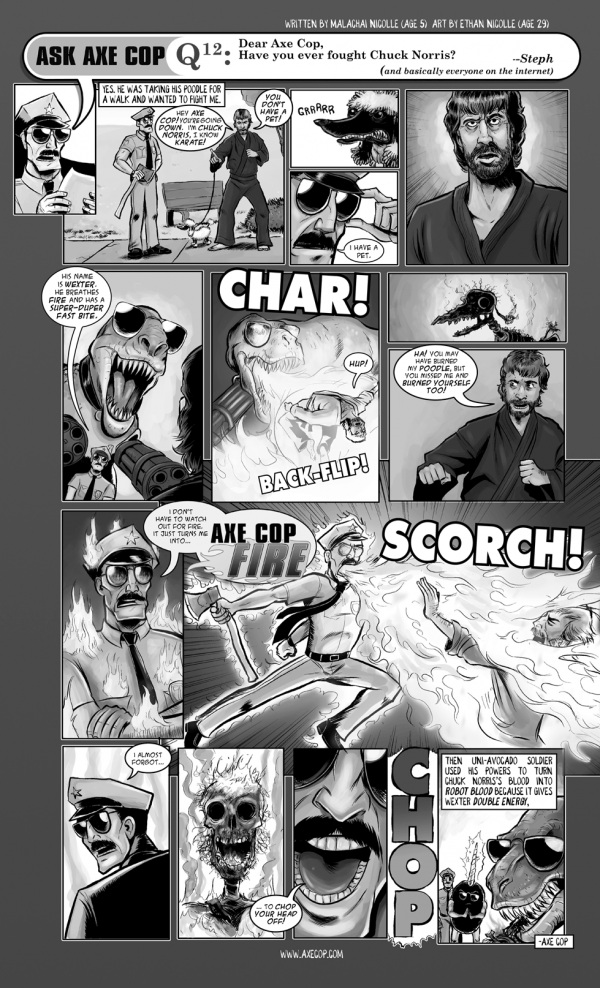 But just when you thought it couldn't get any better... they've made a cartoon version -- with Nick Offerman as the (outstanding) voice of Axe Cop -- which I've just seen for the first time.

And it's perfect. I literally, literally laughed so hard at the end of the second episode that I started crying, and couldn't stop for a good two minutes. It was the first time in years I was actually hysterical in the original sense of the word: I laughed so hard I almost went insane.

And after an exhaustive search, it turns out that "Ask Axe Cop" also has some videos online.

No, there's absolutely no science here, just pure, joyous entertainment. There's even an official Axe Cop documentary that gives you even more information as to how this all came to be. I seriously am enjoying this so much I had to share, and I hope you love it too!
Tags
Random Stuff
ask axe cop
axe
axe cop
cop
ethan nicolle
flute
flute cop
malachai nicolle
nick offerman

I'm partial to this Live Action adaptation from several years ago. The line delivery is perfect, and the end credits song is amazing. It makes you feel like this was something they really made in the 80s.
http://www.youtube.com/watch?v=lxvtd9GLrh4

Now where did you dig this up.
You amaze me.

That is pure comic genius.

Does remind me somewhat of Calvin's F14's in Tomcats.

Hobbes was not impressed. Cats seldom are.

If you like Axe Cop, you might want to check out the Dr. McNinja webcomic. It's also an action parody, although, since it's written by an adult, it doesn't cheerfully ignore plot consistency like Axe Cop. Axe Cop & Dr. McNinja actually had a crossover already, as the creators could see that they would appeal to similar audiences.

OK, now I know something about Axe Cop. Being one of your Patreons, however, I expected to see your preview photos for halloween, not a blank patreon image. Sheesh.