What does the Universe look like as seen from its most distant galaxy?

"One sees qualities at a distance and defects at close range." -Victor Hugo

A couple of weeks ago we took a look at the most distant galaxy (so far) in the known Universe, a galaxy so far away that it takes exclusively infrared observations from our most power space telescopes (Hubble and Spitzer) in order to detect it. What's perhaps even more remarkable is that the light we do detect from it -- the light we detected in the infrared -- was actually emitted in the Ultraviolet part of the spectrum! 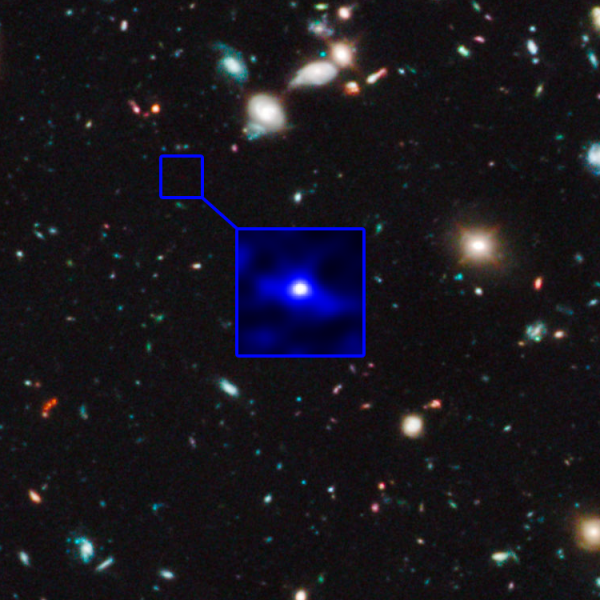 It's only the vast expansion-and-redshift of the Universe that has taken place, along with the fact that the light has been traveling for some 13.4 billion years, that allow us to observe it as we do. Considering that the Universe itself is only 13.8 billion years old, we're not just looking a vast distance across the cosmos when we look at this galaxy, we're also taking a tremendous glimpse back in time.

I don't know about you, but I can't help but wonder what we'd see if we were somehow (and don't worry about how) located in that distant galaxy, and looked out into the Universe from there. 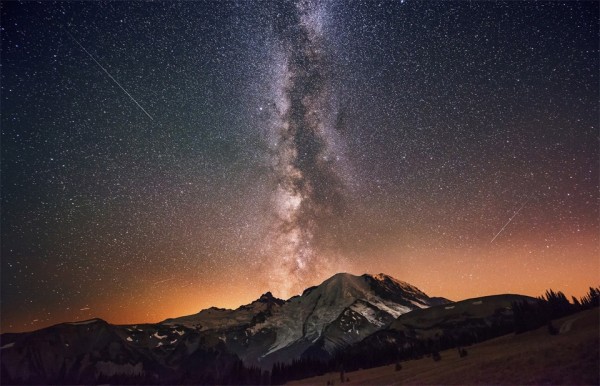 No matter what, you'd be living within a galaxy (or proto-galaxy), and would see a night sky filled with all the stars from within it. But what would you see in detail, and what would you find when you looked beyond your own galaxy? There are two different answers, depending on how you interpret this: an interesting one and an incredibly interesting one. Regular-interesting first.

Let's imagine that instead of evolving here, in our Milky Way, second largest galaxy in our local group, a small group of galaxies some 50-60 million light years from the core of the Virgo Supercluster, a minor overdensity among many superclusters in the large-scale structure of the Universe, we evolved over there. Over where we see UDFj-39546284, the current record-holder for most distant galaxy.

What would we see?

In some ways, it'd be very similar to our current view today. 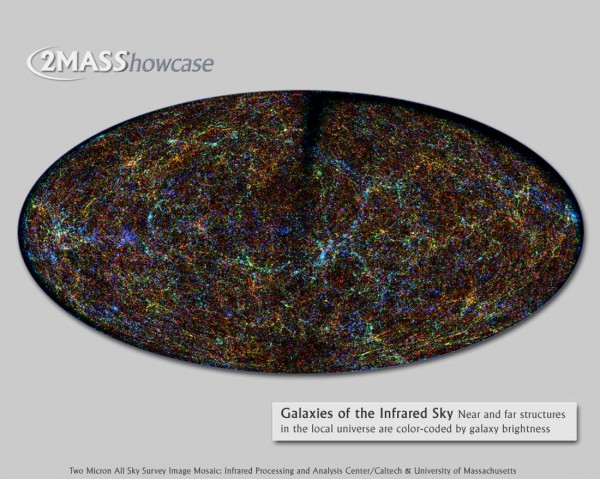 But some important details would be very different. 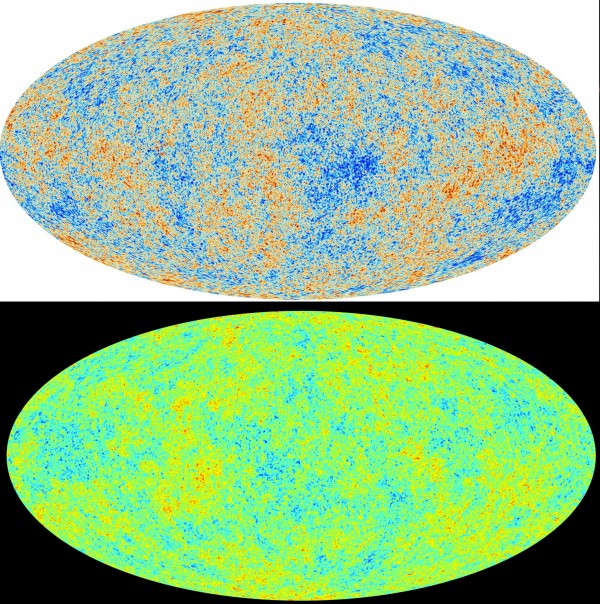 Images credit: ESA and the Planck Collaboration (top), ESA, of a simulation (bottom).

For one, the Cosmic Microwave Background would have a completely different pattern of hot-and-cold spots across the sky. The temperature pattern we see here-and-now is specific both to our location and to our present time; at any other location and at any other time (in increments of about 117,000 years or at distances differing by about 117,000 light-years), the pattern we'd see would be completely unrelated to the pattern that's there now. Yes, it would have the same spectrum of fluctuations, but the individual details of where it's hot and where it's cold would bear no resemblance to our own.

For another, the proto-galaxy we see now, UDFj-39546284, is very likely going to evolve into a giant elliptical galaxy over time, one of the largest and most massive galaxies in its neighborhood. Being inside a giant elliptical (like Messier 60) would cause the sky to appear very different from how it appears inside of our Milky Way, and that would be a huge difference for practically all non-extragalactic observations. 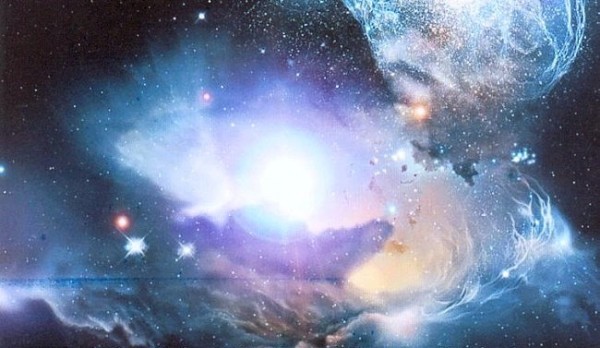 And if we looked in the exact opposite direction from where we look to see this galaxy today from that galaxy, we'd be looking back at our own Milky Way. What would we see? Most probably, a very faint collection of small proto-galaxies all much tinier than the Milky Way is today. The Milky Way most probably evolved through a series of mergers of smaller galaxies, many of which are quite ancient. We'd need significantly improved telescope technology over even the largest of what exists today to be able to detect anything at all, but if we could, we'd see hundreds of small proto-galaxies and probably thousands (or even tens-of-thousands) of globular clusters surrounding what will eventually become the Milky Way.

And that's the less interesting question-to-answer. 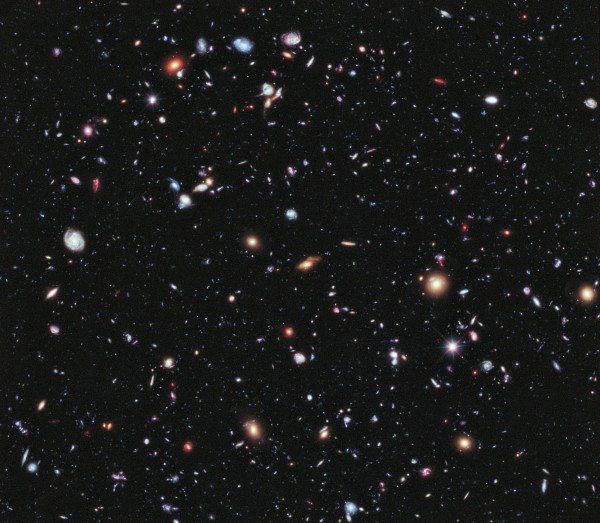 Because the more interesting one is to answer what would the Universe look like not if we were at that location 13.8 billion years after the Big Bang, but what if we were (somehow) at that location as it appears to us from our vantage point today, or back when the Universe was a mere 370 million years old: just 2.6% of its current age. Above is the Hubble eXtreme Deep Field, our present deepest view of the Universe. When we stare out into the abyss of darkness now, away from all known galaxies, this is what shows up with a long enough exposure. 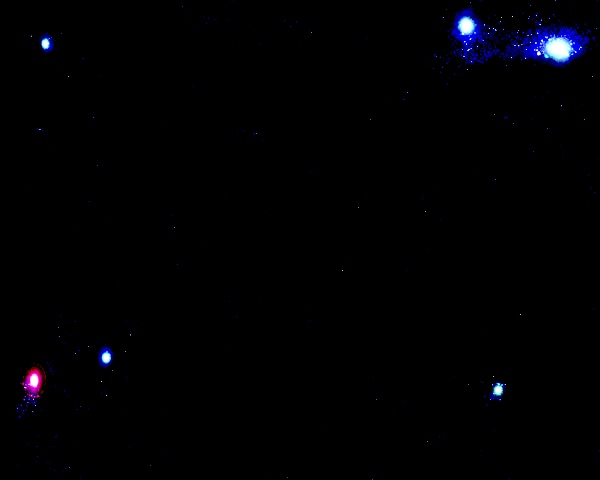 Image credit: Wyldsoul of deviantART (original), highly modified by me.

The Cosmic Microwave Background? No way! At that early time, the temperature of what we know at the CMB would be a relatively toasty 35 Kelvin, or enough to bump it all the way up into the infrared portion of the spectrum! The same wavelengths that the Herschel Space Telescope saw -- to examine star-forming gas -- would be deluged with relic, primeval light from the young Universe! 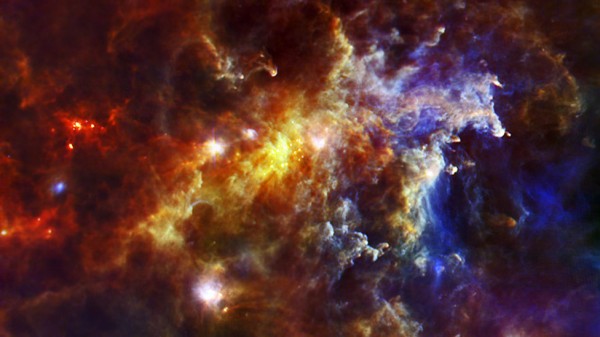 The average density of the Universe would be about 2100 times the density it is today; practically every direction we looked in would have a tremendous amount of light-blocking dust. Bok globules, like the black cloud (Barnard 68) below, would be incredibly more effective at screening background light, and would exist in almost all directions from your point-of-view. 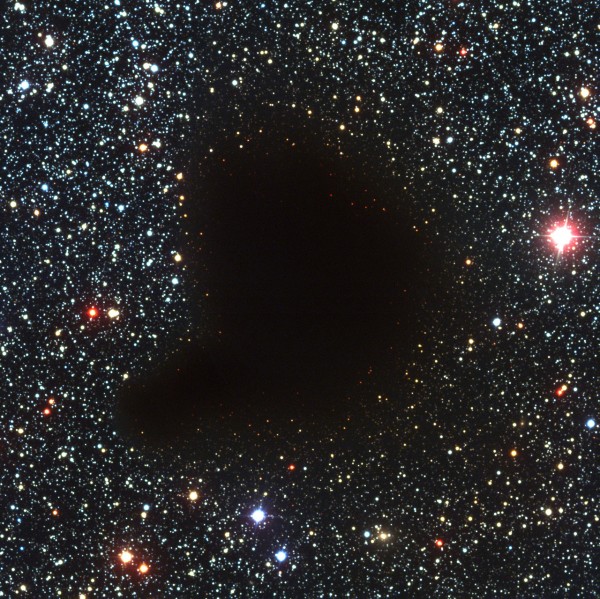 And worst of all, everything that we could see would appear to be receding from us at an incredible rate. You think the Universe is expanding quickly today? Peanuts!

Our expansion rate today means that for every Megaparsec (about 3,000,000 light years) distant an object is, on average, it appears to speed away from us at some 67 km/sec.

Back in the day? At the location of this galaxy? For every Megaparsec an object is distant from us, it recedes at about 1,700 km/sec, or about 0.6% the speed of light. Fun, right, I know!

But there's one part that's the most fun, at least, for me.

And that's what the Universe would look like from the perspective of our current record-holder for most distant galaxy!

@Ethan: what is the 117,000 (light)year scale you mention? Is that the "wavelength" of the baryon acoustic oscillations?

The rate of stellar birth would have been astronomical (sorry). There would have been a lot of super-giant first- and second-generation stars around for excitement as well. Extragalactic wonders may have been in short supply, but the local skies must have been very impressive.

I read that 117, 000 years as a turbulence life sufficient to obliterate all known recognizeable features in the cloud of background radiation. Is that right?

That is the physical size of the thickness of the surface of the Cosmic Microwave Background. We say that the surface of last scattering is from when the Universe was 380,000 years old, but in reality that surface covers a large volume, redshift-wise. In reality, the photons that make up the CMB surface scattered last over a wide range of times, dependent on many features, and the thickness of where they come from is the 117,000 year figure.

The vast majority of structure, on CMB scales, is far smaller than 117,000 light-years, but the reason I chose that amount in time (or motion, in distance) is because those surfaces -- from what one sees here and now versus elsewhere or elsewhen -- will no longer have anything to do with one another. So you wouldn't be seeing any of the same features, except for the absolute largest features in the Universe.

Thanks, Ethan! I knew the CMB wasn't "instantaneous", but I don't think I realized just how long the recombination took. It makes sense, of course, that once there had been some expansion, the now-causally-disconnected regions could have substantially different cooling rates.

Your conversion of that into a scale on which the CMB structure would be uncorrelatedly different makes sense to me. And this also finally clarifies for me why we can't identify any of the fine-grained structure in the CMB with large-scale structures we see today.

Ethan: You said this: "And if we looked in the exact opposite direction from where we look to see this galaxy today from that galaxy, we’d be looking back at our own Milky Way".

There would have come a time at which dark energy became detectable just above the level of statistical noise. Oh to be a proverbial fly on the wall of some far-away astronomy conference when this subject first came up!

Which raises the question: are there any features of the universe as we observe it today, that appear to be difficult to distinguish from noise, but could become analogous to "dark energy" at some point in the distant future: increasing to the point where they have to be accounted for in theory?

I was wondering the same question as John. If we took a hubble deep field pointing away from the Milky Way, would we see empty cosmos? Or would it be deepfields/turtles, all the way down?

Maybe you'd see some other galaxy, and then when you looked to the right and down a bit you'd see a galaxy just like it. Something like this, only a bit tidier and more obvious:

Is it possible to see or predict (computer simulations) how the universe look like in the present days? (earth time)