"It is by going down into the abyss that we recover the treasures of life. Where you stumble, there lies your treasure." -Joseph Campbell

It took Charles Messier and his assistant, Pierre Méchain, a lifetime to scan and survey the sky for all the permanent deep-sky objects visible in their telescopes that could possibly be confused for comets on first class. More than 200 years later, these 110 deep-sky objects are among the best seen and most wondrous sights of the Universe, accessible to anyone with a decent telescope and dark skies. This Messier Monday, let's look the farthest into the Universe that the Messier catalogue can take us!

The next-to-last addition to the Messier catalogue, Messier 109, is both one of the easiest objects to locate -- as in, the sky makes it easy to know where it should be -- and yet one of the most difficult objects to actually see with your own eyes! How are both of these things paradoxically true? Just locate the Big Dipper, visible over the northern horizon after sunset, and you'll understand. 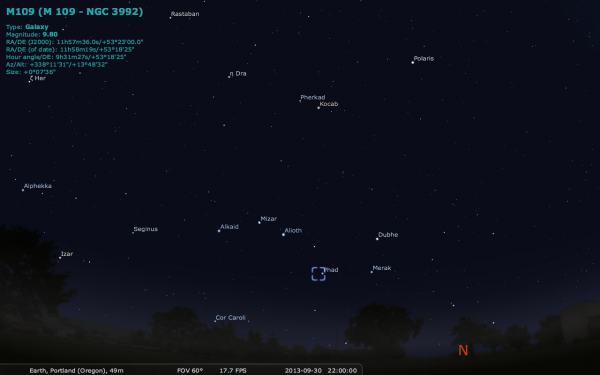 The familiar pattern of seven stars to northern hemisphere observers consists of three very bright stars in the handle, three more very bright ones in the bowl, and they're linked together by a significantly dimmer one that connects them. The lower-left star in the bowl, Phad, is bright, blue, young and hot, and lies only about half-a-degree away from today's target: M109. 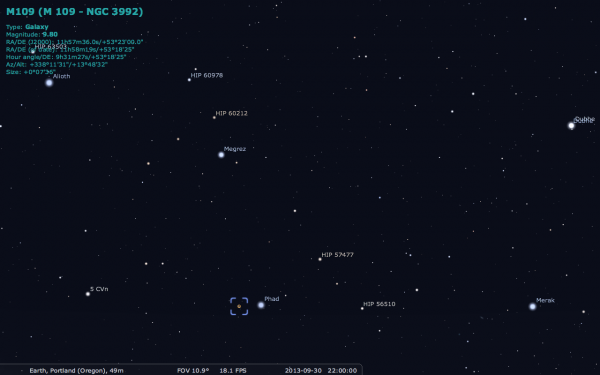 You normally think of city lights or the Moon as major sources of light pollution, but when you've got a distant galaxy with a low surface-brightness as seen from Earth less than a single degree away from one of the 100 brightest stars in the sky (Phad is #86), your best bet, if you want to actually see it, is to locate Phad and then move your optics so that the star is out-of-frame, otherwise it'll be in danger of washing out the galaxy you're seeking -- Messier 109 -- which is more than seven magnitudes dimmer! 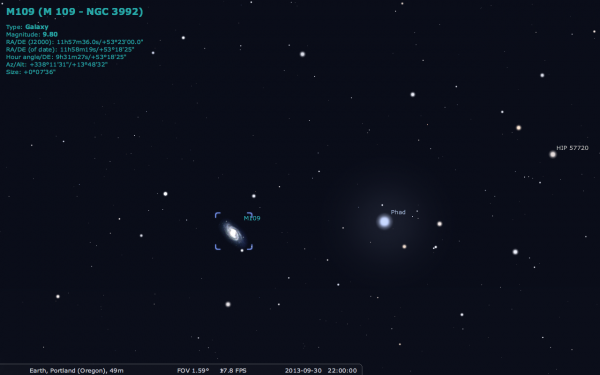 The discovery of M109 was attributed to Méchain in 1781, and recorded in his catalogue by Messier two years later, who simply wrote:

A Nebula which is near Gamma UMa [Phad].

Although M109 certainly is a nebula near γ Ursae Majoris, it turns out that it probably wasn't discovered by Méchain after all! 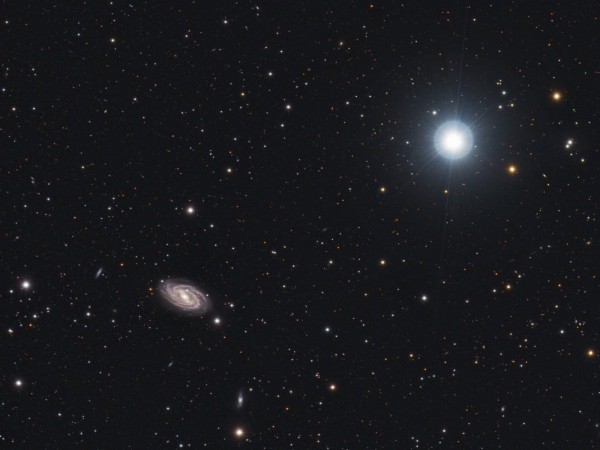 Image credit: Bernhard Hubl, via http://www.astrophoton.com/, of M109 with Phad.

When Méchain wrote about the Owl Nebula (M97) in a letter to Bernoulli, he also mentioned two other nearby nebulae:

When reporting its position, Mr. Messier speaks of two others which I also have discovered, the one close to this one [M108], & the other close to Gamma [Ursae Majoris; M109].

But the position that Messier recorded of M109 -- the right ascension and declination (astronomical equivalents of longitude and latitude) -- is a little bizarre. While the declination corresponds precisely to the position of M109 (also known as NGC 3992), the right ascension actually corresponds to the "copycat" galaxy NGC 3953. A further review suggests that Méchain actually discovered the latter, and that Messier himself was the first to discover M109 itself! 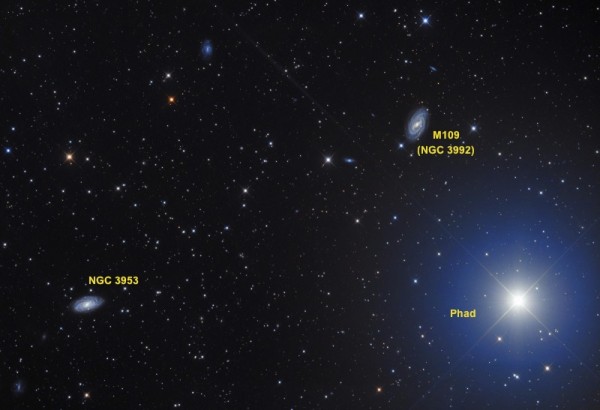 Image credit: Davide Bardini of http://www.astrosky.it/; labels by me.

This was only uncovered in 2006 by Henk Bril; some sites now call NGC 3953 "M109B," which is the equivalent, to me, of telling Méchain he (quite generously) gets partial credit for this discovery.

But moving beyond the historical era and into the modern age, what exactly are we looking at when we consider the next-to-last addition to the Messier catalogue? 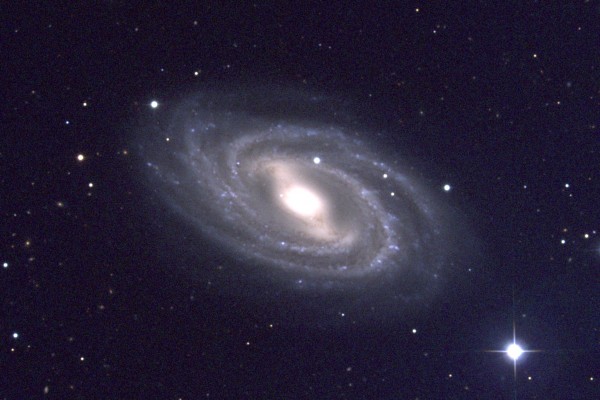 This barred spiral galaxy with apparently five separate grand, sweeping arms appears tiny for a galactic Messier object in the night sky: it measures just 7.6' by 4.7', where an arcminute is just one sixtieth of a degree. (1° = 60'.)

But there's a difference between angular size and physical size! Even though M109 takes up a very small region of the sky, it's incredibly far away, and it turns out to actually be physically larger than our own Milky Way! 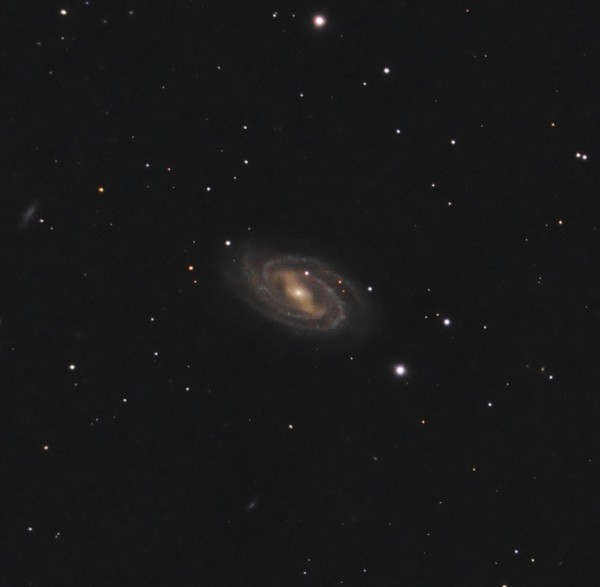 This galaxy is the largest member of a decent-sized group containing more than 50 galaxies, and the only such member that has a Messier number to its fame. (Although I suppose NGC 3953, or M109B, is worth partial credit!) Although distance estimates to this galaxy vary, the most recent estimate places this galaxy at a distance of 74.7 million light-years, which would mean it's 165,000 light years in diameter, or nearly double the size of our Milky Way! 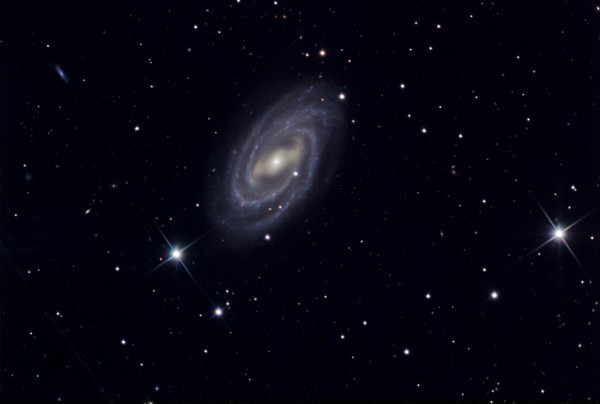 We can take a good look at this galaxy in the infrared, thanks to IPAC, or NASA's Infrared Processing and Analysis Center, which shows off the warm dust in the galactic disk which will form new stars, as well as highlighting the cooler, redder stars in our own galactic foreground that frame this cosmic beauty. 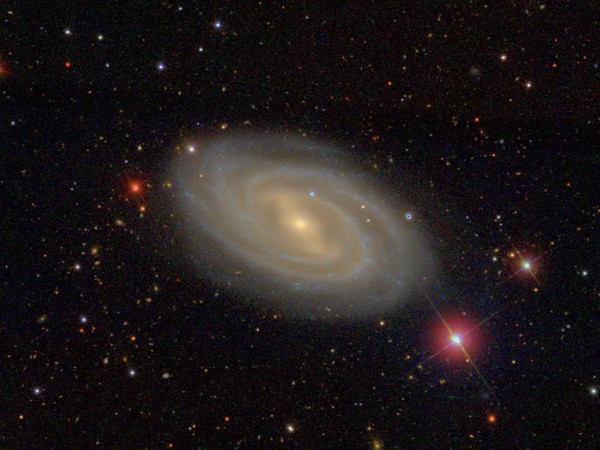 There is a Hubble image available, although it's a bit older (19 years old) and a relatively short-duration exposure compared to what you're likely used to. Nevertheless, it gives an intriguing view of the core of this galaxy! 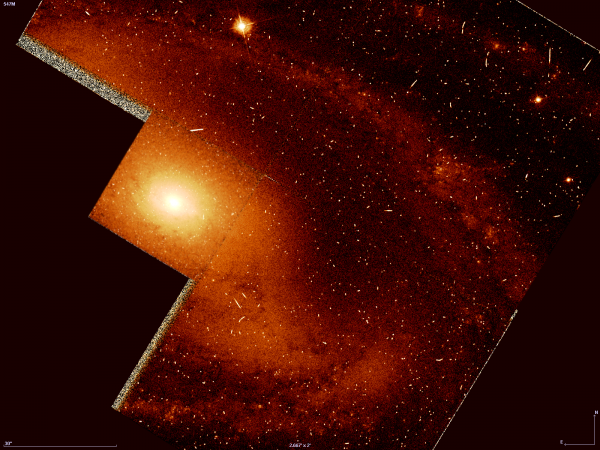 And finally, the most spectacular view I've encountered of the entire galaxy comes courtesy of Bob Franke, who (in full resolution) shows off not only Messier 109 -- which may prove to be the most distant of all the Messier objects -- but three of its satellite galaxies in a left-to-right row: UGCs 6969, 6940, and 6923. 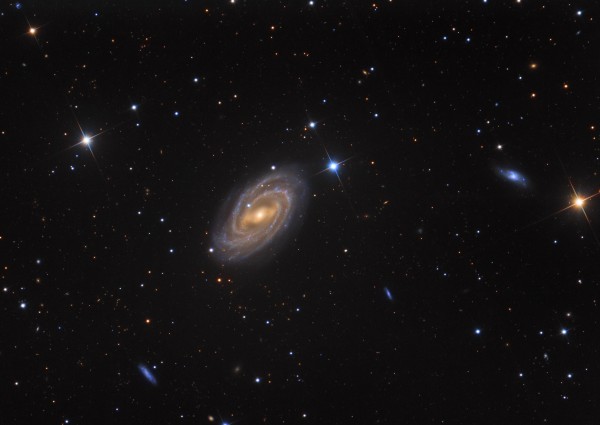 Receding away from us -- like nearly all external galaxies -- at more than 1,000 km/s, Messier 109 will only grow more and more distant from our own galaxy as the Universe evolves. But this Messier Monday, enjoy the spectacular view of this distant, glorious object, if you can see it for yourself through the glare of its incredibly nearby bright star! Including today’s entry, we’ve taken a look at the following Messier objects:

Come back next week, where a tiny crescent Moon will set early, paving the way for a spectacular night sky, arriving just in time for our next Messier Monday!

Messier Monday: A Spiral with an Active Black Hole, M106

"The proverb warns that 'You should not bite the hand that feeds you.' But maybe you should, if it prevents you from feeding yourself." -Thomas Szasz But on this Messier Monday, you're lucky enough that you're about to be introduced to one of the great northern galaxies of the Messier catalogue…

Messier Monday: A Galactic Sliver in the Big Dipper, M108

"Most writers spend their lives standing a little apart from the crowd, watching and listening and hoping to catch that tiny hint of despair, that sliver of malice, that makes them think, 'Aha, here is the story.'" -Ayelet Waldman Welcome back again to another Messier Monday, where we're all set to…

"I should like to lie at your feet and die in your arms." -Voltaire Every object that we look at for Messier Monday has its own flavor, its own qualities, and its own unique characteristics. By far the most numerous of the 110 deep-sky objects making up the Messier catalogue are the galaxies, of…

"Do not look at stars as bright spots only. Try to take in the vastness of the universe." -Maria Mitchell It's time again for Messier Monday, where we highlight the various wonderous deep-sky objects of the night, and show you how to find them against the expansive backdrop of stars. The (almost)…

Marvellous and very informative and beautiful article thanks.

Just locate the Big Dipper, visible over the northern horizon after sunset, and you’ll understand.

A bit tough from Adelaide, South Australia, - sadly the bulk of the Earth gets in the way and we can't see the Big Dipper from here ever. We're too far south. Mind you we do get the circumpolar from here Magellanic clouds, Omega Centauri, Southern Cross etc .. so guess we can't complain too much.

Yeah, I'd love to have the Magellanic Clouds in my sky. No sympathy at all. :)

Same deal from Newcastle, StevoR. Although I have seen Phad sneaking up about 1 degree above the northern horizon lol... but atmospheric extinction at that low altitude ruins any chance of seeing this galaxy.

After the Messier Mondays have finished, Ethan should keep it going with some southern not-a-comet objects ;)

I always fess up to my own -- and historical astronomy's -- northern hemisphere bias.

But even though it's a long way 'til the end of Messier Mondays, as we've only been through around 50 objects, I have highlighted a couple of southern delights you might really enjoy:

To be honest - I am more and more convinced that NGC 3953 is the one and only M109. NGC m3992 is just a historical mix-up. Nice to notice that after 7 years this finally got picked up.