"I like to compare the holiday season with the way a child listens to a favorite story. The pleasure is in the familiar way the story begins, the anticipation of familiar turns it takes, the familiar moments of suspense, and the familiar climax and ending." -Fred Rogers

I know it's still the middle of November, but I know that many of you are already thinking about holiday gifts for the lovers of physics, astronomy and the Universe in your life. People send me books and other educational materials throughout the year for review, and although they all have good and bad points about them, I'm happy to pick out the best ones and share them with you. Have a listen to the influential, unique sounds of Nightnoise while we go through them, performing what should be a classic,

In three different categories -- books, posters and calendars -- I'd like to share with you my favorite gift ideas for the physics-and-astronomy enthusiasts in your life (just like last year), with a special offer and giveaway at the end! 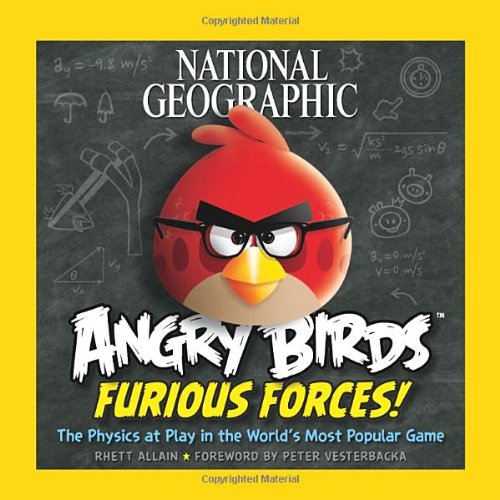 1a.) Book #1 (for ages 7-11): Angry Birds Furious Forces! Rhett is a professor of physics and the science blogger who runs Dot Physics, and I assume everyone knows what Angry Birds is: one of the most fun and addictive flash games of the past few years. Rhett has a great way on his blog of finding the physical simplicity behind everyday phenomena, and I've been impressed with his thorough physics analysis of Angry Birds in the past.

That said, this book was not written for me: an adult who knows some physics and enjoys a good game. Instead, it's a tour of some basic physical concepts, beautifully illustrated (as you'd expect from a National Geographic publication), with the birds serving mostly as color commentary for an introduction to examples of various concepts-in-action as maglev trains, popping popcorn, and roller coasters, among others. (Chad Orzel has more, here.) If you know a smart kid interested in the physical sciences who's in (or achieving at the level of) the upper elementary grades, this is the best book I've seen this year to get them!

1b.) Book #2 (for adults who didn't major in physics, but wish they had): The Theoretical Minimum, by Leonard Susskind and George Hrabovsky. I went into this book with low expectations, and I was pleasantly surprised. While most books that offer introductions to physics fall into one of three categories -- thorough but bland textbooks, feel-good popularizations with little substance, or historical accounts of a particular field -- this one takes a new tact that I haven't seen before: a conversational tone backed up by rigorous examples-and-problems with a very particular, strong perspective on physics. For the crowd that at one point though about majoring in physics, never did for whatever reason, and always thought, "I'd really love to get back into it someday and/or learn what I missed," this is the closest thing to that (non-existent) book you're going to find.

This book is not without its flaws: there's a huge set of discovered errors in the equations that's fast approaching triple digits, there are some basic definitions (like that of the meter) that are many decades out of date, and the examples used are often completely (and unnecessarily) detached from experiment. For the subject it covers in-depth -- classical mechanics -- that's a choice that will no doubt alienate the vast majority of physicists. Susskind and Hrabovsky's perspective has value, though, even if it's incomplete and flawed; it's the first-and-only book of its kind that I know of, and worth considering if you're an aspiring armchair physicist who'd like to develop and strengthen your foundation. 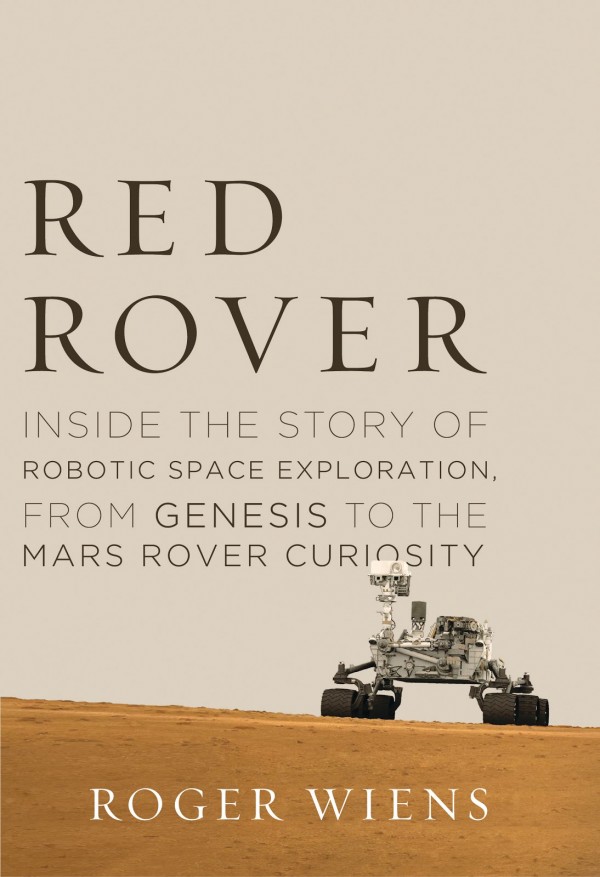 1c.) Book #3 (for adults who love space exploration): Red Rover by Roger Wiens. A tale of unmanned space exploration as told by an insider, this is a slow, meaty but rich read. Those of you who are interested in the inner workings of NASA and the technical and economic challenges faced by the scientists striving for the loftiest of goals on the tightest of budgets. This is a personal and emotional story as well -- of one scientist working on just one particular aspect of many missions -- that tells the tale of a deep and intense fascination with the Universe beyond our world.

Warning: this is an incredibly depressing tale if you read it (as I do) from the perspective of someone who thinks investment in scientific research is vital to the future success of the human endeavor. It's crushing to realize -- over and over, as the book makes clear -- how much we could know, learn and achieve with paltry additional investments, and yet they never come. One is left with the impression that even the most talented and competent instrument builders need to get lucky just to have a chance at success. At the same time, the optimism and the enthusiasm from every scientist involved shines through, and the missions are treated with unconditional love. If you'd like to know more about the robots we've got exploring the Solar System and the humans behind them, and you've got the patience and effort for a slow read, this is the book for you. 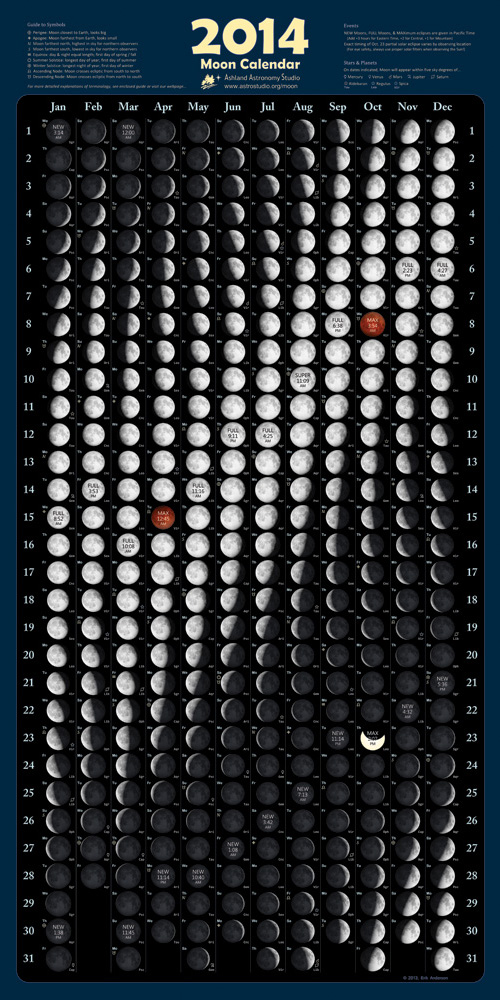 2.) Poster: The Ashland Astronomy Studio Moon Calendar by Erik Anderson. I've seen plenty of Moon calendars over the years, and this is the first one I'm happy to rave about! Pretty much every calendar out there shows you the daily Moon phase/illumination, but very few of them show you all the details you'd care about if you were a night-sky enthusiast, including:

But this 2014 lunar calendar includes all that and more! 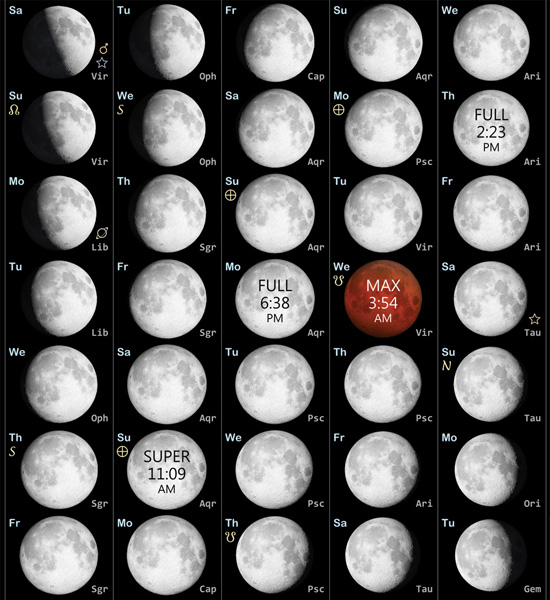 Even supermoons -- when full Moons coincide with perigee -- are denoted here, as are lunar eclipses and the one Solar Eclipse (a partial) visible from the Northern Hemisphere. There's also a very handy Moon Calendar User's Guide that will help you get the most out of yours, filled with fun facts. 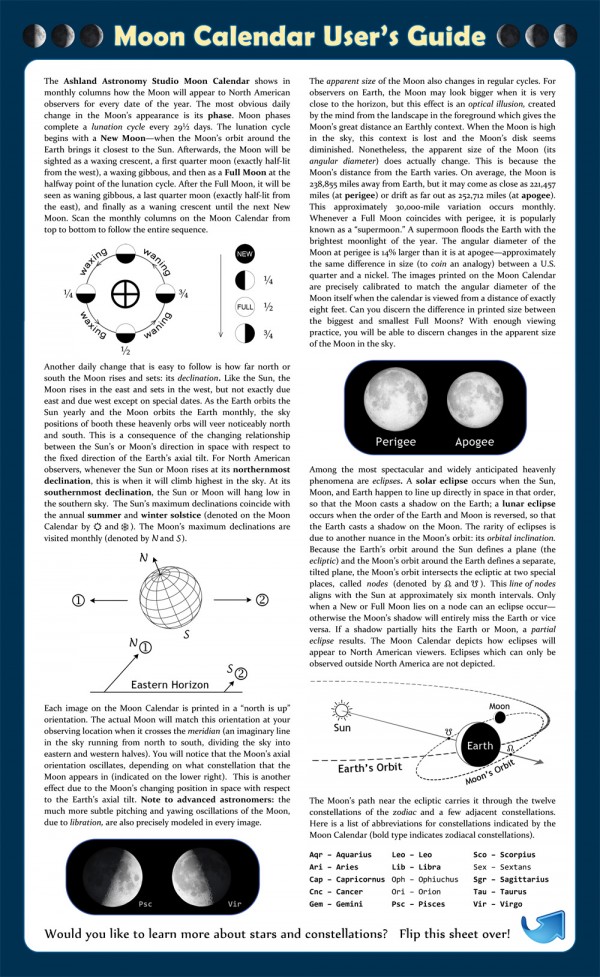 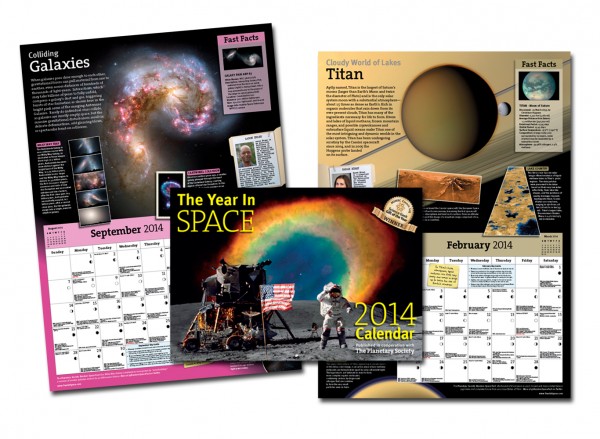 3.) Calendar: The Year In Space 2014 Calendar, by The Planetary Society and Steve Cariddi. To me, a wall calendar is only as valuable as how often you look at it, and how rewarding it is to you when you look. I've been using the 2013 calendar all year, and I love it. I'm used to calendars being small-ish and having one main picture on them, with maybe the day's Moon phase on it. This calendar, on the other hand:

Each month has its own unique theme and layout, which you can preview here; this is June, as an example. 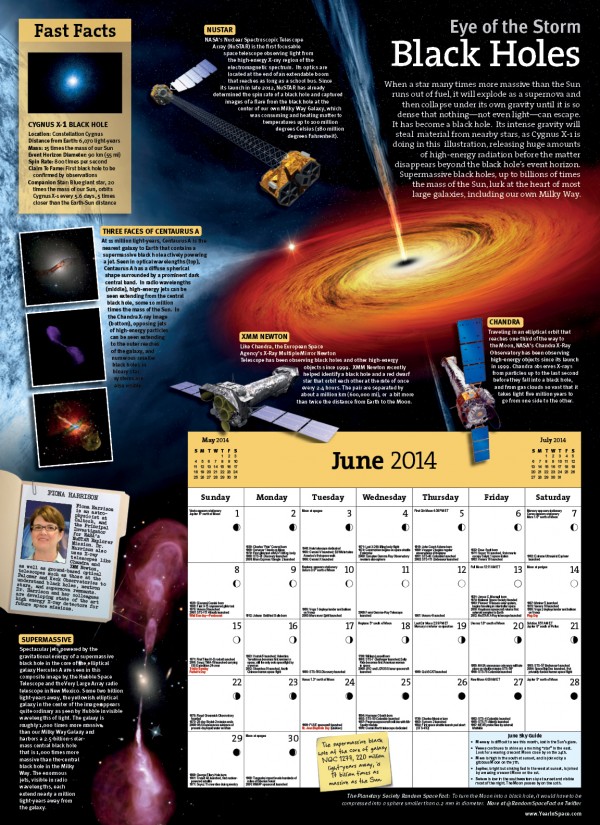 Best of all, they're not only extremely inexpensive, but you can get a discount (free US shipping / greatly reduced international shipping) on your order by clicking the "Internet" button and leaving a note that Ethan of Starts With A Bang sent you!

But there's even more! We did a giveaway last year and these calendars were so beloved by you that Steve Cariddi has offered to do one again, so here's the deal as of right now:

Submit your next Ask Ethan question here, and leave an email address for how to get in touch with you. Whoever's questions are chosen for the next five Ask Ethan columns will get a free calendar shipped to their address, courtesy of Steve and the Planetary Society at no charge!

The calendar was MSNBC's Science Geek Gift of the Year for 2013, and I wouldn't dare recommend any other calendar as long as this one is out there!

Hope you enjoyed this early holiday roundup, and looking forward to your best questions for the upcoming giveaway!

Great prizes here! Some I'll have to see if I can find in the very probable event that I don't /can't win.

I hope this open to all including international commenters like this Aussie? It is, right?

StevoR (and everyone else outside of the USA),

Yes; as always, all giveaways/contents are open to anyone in the world. :-)

Hope you got my question - hope you didn't get it twice.

Really great news Ethan. I am happy to say that, thanks to you, I have one 2013 calendar still proudly standing on my wall :)
And I will get the new one through regular order (but you can probably still expect to see my questions in the future :))
Cheers

That song is sort of a classic, it's a Canadian Christmas carol so it's not that well known. I've never heard that version before; The tempo has been slowed down quite a bit to get that really lovely effect.

Another one you might like is the Huron Carol. The version by the Crash Test Dummies is the best one I've heard.